All sixty-eight years and 170 members of the "the world's longest-running Western Swing band" are covered at the LIght Crust Doughboys Hall of Fame and Museum in Mesquite, Texas. 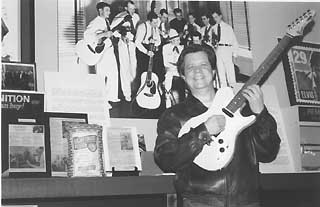 The Light Crust Doughboys not only helped develop what is (along with Tejano) one of Texas' only original genres of music, but after 68 years the six-man band also lays claim to being the "world's longest-running Western swing band."

From his office just off the showroom of the Light Crust Doughboys Hall of Fame and Museum in Mesquite, Art Greenhaw loves to tell the story of the band that started in Fort Worth with Bob Wills playing fiddle on the Burrus Mill radio show. One of the current band members, Marvin "Smokey" Montgomery, started playing banjo with the Doughboys in 1935 when he was 23 years old.

A picture in the museum shows the fiddle band trio led by Wills, then called the Fort Worth Doughboys. The King of Western Swing began his career by talking the Burrus sales manager, W. Lee O'Daniel, into sponsoring the band on a 15-minute radio show. Each weekday at noon folks tuned in to hear a couple of licks from Wills' fiddle and Trett Kimsey's introduction: "The Light Crust Doughboys are on the air!"

O'Daniel didn't care much for the band's "hillbilly sound" and canceled the show after two weeks. Thousands of fans convinced Burrus Mill to reconsider, and the show became the most popular radio program in the Southwest.

Wills was fired in 1933 for honky-tonking and went on to form the Texas Playboys. W.L. "Pappy" O'Daniel lasted only a couple of years longer with the flour company. The tireless self-promoter left to start his own flour company, Hillbilly Flour, and formed the Hillbilly Boys to sing his jingles. O'Daniel used the musical attraction to win two terms as governor and a short stint in the U.S. Senate.

In the meantime, the Light Crust Doughboys were riding a wave of success with Western swing. The band appeared in a couple of movies and made several records. With the exception of four years during World War II, some version of the band has been playing its own distinctive style of music ever since. The radio shows stopped in 1950. The Smokey Montgomery-led band continued to play flour company events until the early 1990s.

During the 1980s the flour company did a survey that showed that 90% of Texans over 50 years old remembered the Light Crust Doughboys, Art Greenhaw says. Burrus Mill was bought by an international conglomerate, and the flour business was rolled into the Martha White Flour Company.

Over the years more than 170 musicians have been associated with the band, including Hank Thompson and "take it away" Leon McAuliffe. As the youngest member of the band, Greenhaw began as the band's booking agent in 1983 and joined the boys onstage in 1993 when bass player Jim Boyd died.

A working musician since the age of eight, Greenhaw has been around music his entire life.

His grandfather started the McWhorter Hardware store in 1943. The Greenhaw name was added to the marquee in 1949, when his father married into the business. Along with seeds and farming implements, the McWhorter-Greenhaw Hardware store was one of the first stores to offer school band instruments for rent. In 1976, Art convinced his father to add guitars to the aisles of hand tools and gardening supplies.

By 1997, Mesquite had become "a hamburger-and-fry suburb" of Dallas, Greenhaw says with a hint of disappointment in his voice. The hardware store was converted into an antique market, and Montgomery's collection of memorabilia opened to the public.

Raised on rock & roll, joining the Doughboys was a dream come true for Greenhaw. "I always loved the Doughboys," he says, "Western swing is such a synthesis of all music -- jazz, blues, gospel, fiddle music, and more. It's hard to classify."

Although the band has garnered two Grammy award nominations in the 1990s for best gospel album, their sound is not locked into any mold. "We're not strictly a swing band," Greenhaw says. "We do some traditional songs, but we cover a wide range of music. That's what separates us from other swing bands."

One theme that has carried through the band's history is that they are mainly a show band, just like when they were sponsored by Burrus Mill. The majority of the group's concerts are in theatres such as the Paramount Theatre in Austin and The Pocket Sandwich Theatre in Dallas (214/821-1860). The small playhouses fit the Doughboys' folksy, meet-the-people style.

The Doughboys have been such an enduring part of Texas that the state Legislature honored them as "Official Music Ambassadors" of the state in 1995. The band has recently recorded CDs with the Southern Methodist University band and an original score for Amarillo's Lone Star Ballet.

Greenhaw has found time to work with Garland-based Rowan Guitars to produce a Light Crust Doughboys limited-edition guitar. "To have your own signature guitar is better than being president of the United States," Greenhaw says. His is also working with Marvel Comics' Stan Lee to produce a line of faith-based comic books.

The musical museum packs a lot of punch into a small space. Besides the rare memorabilia, it is fun to walk down the aisles filled with antique dealers. The McWhorter-Greenhaw Hardware store is at 105 Broad St., off of Main Street in what is left of downtown Mesquite about 1.5 miles south of U.S. 80. The store opens Monday-Friday 8am-6pm and Saturday 9am-5:30pm. For information, call 972/285-5441 or visit the Doughboys' Web site at http://www.artgreenhaw.com.

Gem and Mineral Show in Fredericksburg at the Municipal Park Pavilion features lapidary and artifacts, Jan. 15-16. 830/669-2639.

Lies, Legends and Little Known Facts of the Hill Country at the Kerrville-Schriener State Park outside of Kerrville presents Texas folklore in an entertaining program, Jan. 26. 830/257-5392.