There is an immense, hairy creature lurking in the woods outside of the small Texas town of Hamilton, and no, it's not your brother-in-law. 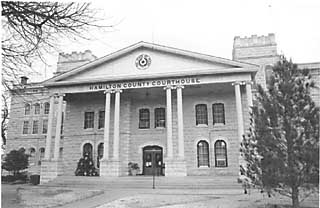 The 1887 courthouse in Hamilton belies the creature hiding in the woods outside of town. (Photo By Gerald E. McLeod)

Hamilton represents a stereotypical small Texas town as well as any place can. On the Central Texas plains skirting the northern edge of the Hill Country, the town of 3,000 residents is surrounded by farms and ranches. A thriving business district lines the streets around the historic and picturesque county courthouse.

Generations of Texans have worked hard to cut the fertile fields and pastures out of the thick live oak forest that covers the landscape between the many creeks and rivers that cut through the area. Indian raids plagued settlers into the late 1800s. When the Civilian Conservation Corps tried to establish a work camp in the area, the workers revolted because of the hard work and mosquitos along the Leon River.

Today, the seat of the county of the same name maintains a quiet, small-town environment. Families that persevered and prospered built fancy homes along U.S. 281 south of the courthouse square. It is a scenic area with back roads that just beg to be explored and guest services that are seldom crowded but always friendly.

Between Friday night high school football and dances at the VFW Hall, it's a pretty quiet place. Except ... there's another resident of Hamilton County that few of the town's citizens will admit exists. Out in the thickly tree-lined riverbanks and the brushy creek bottoms, a huge hairy creature lurks in the shadows.

Old-timers have whispered about the creature. High school students doing what they don't want their parents to know they do out on dark dirt roads swear there is something crashing through the woods. But no one has come forth with confirmation that the Sasquatch of Hamilton County really exists.

The closest thing to proof is a letter that Daniel Fisker wrote to The Hamilton Herald-News in 1992. Late one moonless night, Fisker and his family were driving home to Hamilton from Stephenville. It's a pretty straight 40-mile shot down U.S. 281 between the two towns. His wife and kids were asleep when they crossed the low bridge over the Leon River just north of Hamilton.

About midway across the long bridge, Fisker began slowing down when he saw something move from the shoulder of the road. At first it looked like a large animal, but the closer he got the more the creature looked human. By the time the car's headlights illuminated the beast it was standing at its full height in the middle of the road.

"It stood, I would say, approximately seven or eight feet tall, weighing probably between 400 to 500 pounds," Fisker wrote to the newspaper. The animal's stance was more of defensive surprise. The musky smell of dead flesh filled the car through the open window. Fisker was frozen with astonishment and bewilderment, not knowing how to react to the incredible roadblock in front of him.

"It had long arms that extended down to its knees. Its face looked almost human," Fisker wrote. "It looked at us and growled a low moan, showing four fang-like teeth, two on top and two on bottom, and the rest flat like humans. Then it hurled over the guard rail and ran off into the night toward the brush along the river banks on the west side."

No one in Hamilton had heard of Daniel Fisker before or after his famous letter to the Herald-News. The letter did get the town talking about something that few would admit having a knowledge about. The stories were like a crazy old aunt that no one talked about until they found out that other families had a similar relative.

Evidently lots of places in Texas have a big hairy monster living on the fringes of society (your next door neighbor or brother-in-law don't count). According to the Bigfoot Field Researchers Organization (http://www.moneymaker.org/BFRR/) there have been admitted sightings of a Bigfoot-like creature in two dozen Texas counties; mostly in East Texas. Although there has been no conclusive evidence recognized by the scientific community, sightings have been reported in every state except four, and in Canada and Australia. Nearly every Native American culture has a legend of elusive giants that wandered the perimeters of their society.

Most of the sightings in Texas have been in heavily wooded areas near rivers or lakes. Spotted in daylight and at night, the creatures seem to be harmless, but often curious. They're always big and strong. The next time you're in the woods, whether hiking or driving down a country lane, when you feel the cold chill of a pair of golden eyes staring at you from behind a tree ... you have met Sasquatch.

Wurstbraten at the Zion Lutheran Church in Walburg offers a homemade German supper prepared by the congregation for a moderate price, Nov. 1. 512/863-3065.

International Tolbert/Fowler Chili Cookoff takes over the dusty ghost town of Terlingua for the original contest to find out who makes the best "Texas red," Nov. 5-6. 903/874-5601.

CASI International Chili Championship is the other chili contest in Terlingua hosted by the chili appreciation society, Oct. 6. 281/362-7167 or http://www.chili.org.

Reserve Campsites Via the Web at campgrounds managed by the Forest Service and the Corps of Engineers. The service includes campsites at more than 1,700 campgrounds in 43 states including Lake Whitney and Canyon Lake. The service was announced a year ago, but delayed until recently because of technical difficulties. http://www.reserveusa.com or toll free at 877/444-6777.