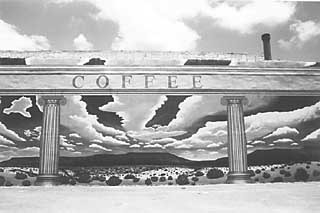 Best Mural: On the side of Perk's Coffee Shop in Lampasas, two pillars hold up the beam of coffee above the brown Texas desert spotted with small green shrubs. The royal blue sky is streaked with white clouds stretching toward the hills on the horizon. The billboard-sized painting seems a little out of place in this town that looks more like a setting for The Last Picture Show. Covering the stucco wall of the 100-year-old building at 406 E. Third, a block west of the county courthouse, the work is the design of Janet Fallon, a local artist who also owns a gallery in town. The coffeeshop isn't bad either. Offering a full menu of espresso drinks and gourmet sandwiches, this bohemian coffeehouse isn't where the farmers and ranchers go to discuss the weather over a bottomless cup of coffee and piece of apple pie. It is where the locals go for weekend poetry readings and open mike performances. The coffeeshop is open Mon.-Thu. 7:30am-6pm, Fri. 7:30am-9pm, Sat. 10am-10pm, and closed Sun.; 512/556-5704.

Best New Park: It isn't often that new parks are added to the public inventory, especially one of the stature of Canyon of the Eagles on the eastern shores of Lake Buchanan. Of the nearly 1,000 acres of pristine hills, only about 150 acres will be developed for public use by the partnership between the Lower Colorado River Authority and Presidian, L.C., an eco-tourism development corporation out of San Antonio. The campgrounds, cottages, trails, and swimming area were opened this summer. Future plans call for a lodge and restaurant on a hill overlooking the lake, a dock for Vanishing Texas River Cruise's trips to see wintering eagles, a park store, and an observatory. The new park is about 14 miles northwest of Burnet off TX 29 at the end of FM 2341 (one of the best roads to explore during wildflower season). For information and reservations, call 800/977-0081.

Best Campy Tourist Attraction: Gone are the days motor lodges, free gas station promotional glasses, and roadside souvenir stands with a real bear caged in the parking lot. But the Frontier Times Museum in Bandera harkens back to the days when the more garish the attraction, the better its ability to entice tourists off the highway. Founded in 1927 and operated for 30 years by J. Marvin Hunter, a local historian, newspaper man, and printer, the eclectic collection is now owned by the city. The exhibit mixes the expected with the totally unrelated. Crammed into three rooms are Western art, frontier antiques, and fading photographs. What makes the menagerie so unique are the South American shrunken head, a two stuffed headed lamb, a petrified cow fetus, and a totem pole. It is all intended to shock, amaze, and get you to spend the $2 admission fee. The museum is on 13th Street in Bandera, one block north of the county courthouse. Hours are Mon.-Sat. 10am-4:30pm, and Sun. 1-4pm; 830/796-3864.

Best Pickle: Maybe not the best, although they are pretty darn good, but at least the most unusual are the fried pickle slices at Catfish Sam's in Arlington. The taste sensation is as hard to describe as you might imagine. Kind of a mix between a hamburger pickle and a french fry. If you're not up to the experiment, their catfish was voted best in Texas by the Texas Restaurant Association. Family-owned since 1952, the eatery is two blocks west of Bowen Road at 2735 W. Division in Arlington; 817/275-9631.

Best Dog Races: Three years before the national taco vendor started using a Spanish-speaking Chihuahua in their ads came the Chihuahua World Cup races. The Gulf Greyhound Park on I-45 between Houston and Galveston holds the tiny dog competition between the track's regular greyhound races one weekend in September. Last year several hundred pooches lined up for a chance to win a tin cup and the title of "World's Fastest Chihuahua." (This year's event was held on Sept.18.) For information, call 800/275-2946.

Best Payback: Agrifos Inc. (formerly Mobil Mining and Minerals Co.) of Houston was responsible for a massive fish kill in the Houston Ship Channel in 1992, when a mountain of phosphoric acid and gypsum spilled into the water. The company was fined $60,000 and agreed to create a 32-acre wetland along the channel that became the property of federal and state wildlife agencies in 1998. The wetland, at 2001 Jackson, is landscaped with 28,000 plants brought in by Mobil and is home to a variety of animals and birds.

Texas Rice Festival in Winnie is one of the largest festivals in the state and honors rice farmers and area ranchers with livestock shows, carnival, cookoffs, music, and lots more, Oct. 1-3. 409/296-4404.

The Carter Downtown is a new gallery sponsored by the Amon Carter Museum in Fort Worth while the main building on Seventh Street is going through a massive renovation and expansion through 2000. The temporary exhibition hall will show some of the art museum's most famous works from its outstanding collection. The Carter Downtown is at 500 Commerce and is open Tues. & Wed 10:30am-5pm, Thurs.-Sat. 10:30am-8pm, Sun. noon-5pm, and closed Mondays and major holidays. 817/738-1933 or http://www.cartermuseum.org.