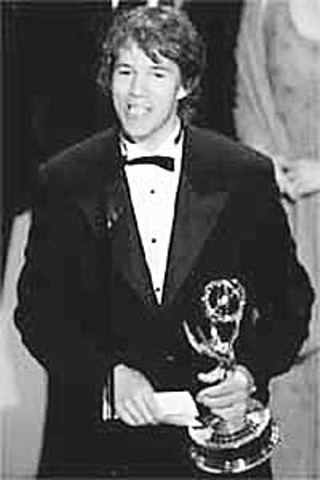 THE BAD & THE BEAUTIFUL In deciding which video to watch, the single most important factor to consider is whether or not it has a "Gowns by ______" credit. If it does, it's at least worth watching just for that. Awards shows fit that bill nicely and have become the public's primary opportunity to see fashion happen. I am thrilled with the amount of interest generated by these shows. They are, increasingly, the single most important venue for designers and stars to show off new looks, and in broad daylight, no less, since the pre-show arrivals are the best part. I always like to see the stars under the merciless glare of the sun, and especially like the sunglasses and evening gown business. Real glamour.

Fortunately, E! television has the best awards show fashion coverage (they're debuting their new Style Network as we speak), but unfortunately, they also have that surgically engineered bag of bones named Joan Rivers. I must admit that for a bag of bones, she looked pretty good on Emmy night -- better than she has in recent seasons. Her dress and hair were nice. And she even seemed somehow more subdued than usual. But that remains to be seen, when her Emmy Fashion Review airs in a couple days.

Our Emmy hostess was Jenna Elfman, who has a certain charm, but fluffed her lines and giggled so much that she appeared to have had a wee bit too much champagne. When she slipped and referred to New York City as "New York Shitty," she drew all the more attention to her error by collapsing in blushing embarrassment. She was engaging, nonetheless, even if her first dress was horrible. It appeared to be a homemade little patchwork-peasant affair that fit poorly. Later, she changed into a very smart evening suit and looked lovely.

There was an ugly trend toward not wearing a bra with dresses that demanded it, and thus we were subjected to a panorama of bound breasts. Get a clue, girls, and obey the dress. If it wants a bra, then wear one. Sarah Jessica Parker looked absolutely dreadful, but Helen Hunt registered a noticeable improvement over her Oscar appearance, after which, I'm sure, she must have murdered her stylist. Stoles and shrugs of all varieties were the accessories du jour, even though the otherwise stunning Sela Ward wore a shrug that must have been pretty in person, but on TV, it looked like she was sporting big red velvet lobster claws. Basically, everybody looked pretty good, except that there was an epidemic of messy hair amongst the starlets.

HAIR-WAY TO HEAVEN The main difference between old stars and new stars is that old stars never leave a limo without done hair. Holland Taylor, Helen Mirren, and Doris Roberts were perfect examples, with perfectly lovely hair. Unfortunately, it appeared as if every other living hairdresser in Los Angeles had gone away for the weekend. Jacqueline Bisset was clearly flummoxed by the situation and remedied it by doing absolutely nothing with her hair. Unkempt and flyaway, it was disappointing to see on an otherwise very nice look. In general, the hair was deplorable, and prime offenders were the, shall we say, less mature, stars. The meagerly talented Jennifer Aniston evidently spent a great deal of time on her hair -- or at least someone did. For all I know she may have had Brad Pitt swing by and pick it up for her on the way to the show. In any case, she looked like Cousin Itt with a perm, and I can't honestly say it was any better than her old hair, but at least her old hair was neatly kept. Jennifer should have asked for some advice from her fellow cast member Lisa Kudrow, who clearly understands the importance of being well-groomed for public appearances and looked fab. Lots of pre-Raphaelite hair didn't work for Jennifer, but was dreamy on Julianna Margulies, with just enough of it caught up in back to showcase her magnificent chiseling. Julia Roberts and Keri Russell were ravishing and kept their amber waves under control, as did Jenna Elfman -- but enough about her. Camryn Manheim, on the other hand, dresses like a million bucks and is the best-looking big gal around. Except her hair was a little too close to the head for her proportions (that word again) and could have been a teensy bit bigger, though I'm definitely not prescribing Delta Burke big hair for her. Brad Pitt didn't fare any better, with a scarecrow-ish thatch on top. And wunderkind David E. Kelley could use a trim, but mainly a comb.

Write to our style avatar with your related events, news, and hautey bits: style@auschron.com
More After a Fashion columns