The 150-year-old Landmark Inn in Castroville was designed to not distract from the natural beauty surrounding it. 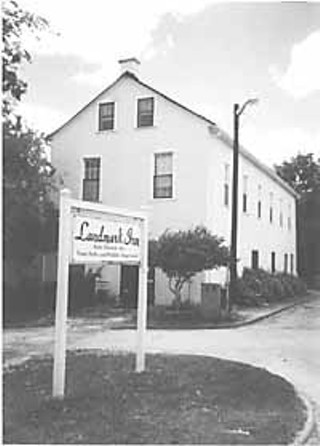 The Landmark Inn has stood in Castroville for 150 years. (Photo By Gerald E. McLeod)

The Landmark Inn in Castroville turns 150 years old this year and the state park is throwing a party to celebrate. The two-story former stage stop has seen a lot of people and events travel down the San Antonio-to-El Paso road that runs past its doors.

To understand the significance of this anniversary you have to be able to visualize the rock hotel sitting in a pecan grove at a bend in the Medina River. The white stucco walls are void of embellishments to distract from the natural beauty of the setting. Unless you consider the rough wood porch connecting the upstairs rooms a decoration. The remains of a once-thriving mill and the cool river water make the park a great place to stop for the night or for a few hours.

To put the old roadhouse in context you also need to understand a little bit about Castroville. The town 25 miles west of San Antonio was one of the largest cities in Texas in the early 1860s, when the population was a quarter of the current 2,000-plus residents. When the railroad bypassed the community, it became locked in time. Within the city limits are nearly 100 buildings that are around the same age as the Landmark Inn.

The founder and namesake for Castroville was Henri Castro, a Portuguese Jew whose family had fled to France after the Spanish Inquisition. Castro worked with Sam Houston to arrange French loans for the republic. By 1842, he had obtained a land grant from the Texas government for more than a million acres if he would settle at least 600 families on the land.

As an empresario (the Spanish title for those contracted to bring settlers to an area), Castro was second only to Stephen F. Austin. He introduced more than 2,100 colonists to southwest Texas and established the towns of Quihi, Vanderburg, and D'Hannis.

Castro settled his first shipload of families at Castroville in September 1844 at the gateway to his colony. The oasis on the banks of the Medina River was actually four miles east of his land grant, but was an excellent staging area for future immigrants. To entice the first settlers, Castro promised each family a city lot as well as 640 acres of land.

Most of Castro's colonists were recruited from the French-German province of Alsace, and other parts of France, Germany, and Switzerland. The town's Alsatian majority prompted its title as "The Little Alsace of Texas." The European culture's dialect and customs are still practiced in some of the town's households.

The Landmark Inn was born in 1849 when Swiss merchant Caesar Monod bought two lots on the river for his house and dry goods store. The traffic on the San Antonio/El Paso Road made the park-like grounds a favorite stopping point. After he bought the property four years later, Irish immigrant John Vance expanded the business by adding the second-floor rooms and a mill. His guest book was signed by Robert E. Lee, Abner Doubleday, and hundreds of other weary travelers.

The mill continued in business until the 1920s, when J.T. Lawler of New Orleans converted it into the first electric generator in Castroville. J.T.'s sister, Ruth Lawler, renovated the hotel in the early 1940s and changed the name from the Vance Hotel to the Landmark Inn.

Lawler gave the inn, mill, and surrounding grounds to the state, and it became a historical park in 1976. Visitors can rent one of the eight rooms, tour the grounds, or visit the exhibition center that tells the story of the Castroville area.

Decorated more in a 1940s motif than with 1800s furnishings, the accommodations are more than adequate, if not romantic. The rooms do not have a phone or television, and air conditioning was only recently added. The park staff is very knowledgeable about biking trips through the surrounding countryside, canoe trips on the river, or walking tours of the historic district.

The historic business and residential areas are centered around US 90 and the west side of the Medina River. Houston Square is the heart of the old district, with St. Louis Catholic Church towering above the small park. The narrow streets are lined with buildings that are typical of the Old West in that they obviously took advantage of what scarce materials were available. Castroville razed very few of the old buildings, preserving a unique style of indigenous architecture.

The sights and sounds of the frontier return to Castroville September 18-19, when the park presents a program celebrating the inn's 150th year. Living history interpreters will portray army infantry, dragoons, Texas militia, California-bound 49ers, Delaware Indians, and Tejano scouts and settlers. The program hours are 8am to 8pm on Saturday and 8am to 3pm on Sunday.

Rooms in the inn are rented Wednesday through Sunday nights. Prices range from $45 to $55 per night. For information on the Landmark Inn, call 830/931-2133. For reservations, call the park department's reservation center in Austin at 389-8900.

Good restaurants, unique antique shops, lots of outdoor recreation activities, natural beauty, and exciting history make Castroville an interesting place to visit. For information on other lodging in town, call the chamber of commerce at 800/778-6775.

Chihuahua World Cup is the featured race at the Gulf Greyhound Park on I-45 between Houston and Galveston. Contestants will be competing for the coveted title of "world's fastest Chihuahua," Sept. 18. 800/ASK-2WIN.

On the Road To ... takes a bus ride from Austin to New Braunfels with the German-Texan Heritage Society for a guided tour of the landmarks and a visit to Gruene, Oct. 19. Reservations required. 482-0927.