At 50 years old, the glass-bottom boats at Aquarena Center in San Marcos are still making the rounds of Spring Lake, with a new owner at the helm. The homemade white fiberglass and polished wood boats still give visitors a look at the underwater world.

Southwest Texas University now owns the boats, but they were built by Paul Rogers in a barn up the hill. Rogers inherited the property, which includes the springs and the headwaters of the San Marcos River, from his father. He got the idea for the glass-bottom boats in 1947 while taking visitors for rides on the lake in a rowboat with a small glass panel in the bottom.

Two years later Rogers designed an enclosed boat with an electric motor that could take two dozen visitors at a time. "He bragged that he could build one of the boats in 90 days," says Ron Coley, director of Aquarena Center. Rogers built 10 of the boats, of which seven are still in use. This year the center launched the first boat to be completely restored.

Rogers built one of Texas' first modern theme parks around the glass-bottom boats. During the 1950s and 1960s Aquarena Springs Resort was the cornerstone of the San Marcos tourist industry. Over the years, the park added a Sky Ride tram, arcades, two restaurants, an underwater theatre, and of course, Ralph the Swimming Pig.

The Rogers family sold the park to SWT in 1994. Since 1996, SWT has been working on a multimillion-dollar renovation to turn the park into an eco-tourism attraction and education center. Ralph is gone, and so are the mermaids and the sky tram gondolas. They have been replaced by biology, art, archaeology, and history exhibits.

The dark walls of the resort's arcade are now lit by aquarium lights of the endangered species exhibit. Besides protecting the five endangered species found only in San Marcos Springs, the center provides education and research facilities for SWT. The laboratories are the restored environment around the lake.

Without the cotton candy vendor and ice cream shop, the former theme park became a public park with miles of paved trails. Admission to the trails and exhibits is free. Rides on the glass-bottom boats cost $3-5.

For an additonal $1.50 on weekends, the staff will tack onto the boat ride a 30-minute tour of the diverse environment. The program was created for fifth-grade science classes, but appeals to all ages, Coley says.

The submarine theatre where visitors once watched mermaid shows is now an underwater art gallery with the springs bubbling 150 million gallons of water on the other side of the windows. The forts and observation decks built by the resort are still on the hillside trails across the lake from the main buildings.

The former theme park has adapted easily to being a learning center. At the landing zone for the now-still sky tram, the ponds have been turned into a wetlands demonstration. Next to the gift shop is a photographic tour of the Edwards Plateau. New exhibits are going to be added throughout the summer, including 50 outdoor sculptures along the hiking trails.

The wildlife is returning to the place that some Native Americans regard as a Garden of Eden for their culture. Birders flock to the park with their life lists to see a wide variety of migratory and resident birds, Coley said. Many of the birds are being attracted by the wetlands restoration project at the park.

The university's biology department is doing an extensive study of turtles at the springs, Coley said. A new exhibit on turtles will be installed by the end of the summer. In the meantime, researchers are having to find the turtle eggs before the racoons do. There is still a lot of work to do for the balance of nature to return to the park.

It is believed that the site has been inhabited for more than 12,000 years by humans, older than any other settlement site in North America. Before Gen. Edward Burleson built his mill downstream around the turn of the century, the springs are said to have shot up like a fountain.

The river powered San Marcos' first industries and fed the first national fish hatchery west of the Mississippi. Digging the ponds for the hatchery revealed the area's history as a permanent village of tribes thought to have been nomadic.

Aquarena Center for Continuing Education is open to visitors seven days a week 9:30am-6pm, weather permitting. The glass-bottom boats go on 30-minutes tours 10am-5:30pm. Eco-tours led by the park staff are offered on Saturday and Sunday throughout the day and by appointment. For more information, call 800/999-9767 or 512/245-7534.

Coming up this weekend

Polka-Waltz Festival in Moulton at the KC Hall features three bands beginning at noon, with fried chicken plates served by the VFD, Mar. 21. 512/596-7609.

Dallas Video Festival showcases more than 250 artists with workshops and discussions, Mar. 25-28 at the Dallas Theater Center. 214/999-8999 or http://www.videofest.org.

Bill Cosby does a one-man show at the Grand 1849 Opera House in Galveston, May 1. Seeing the comedian in the old vaudeville theatre is a perfect reason for a trip to the coast. 800/821-1894. 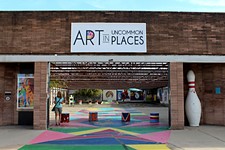