The Texas Zoo in Victoria is one of Texas' best-kept secrets. Situated in a beautiful small town park on the Guadalupe River, the zoo is dedicated solely to native animals, many with rehabilitation needs. Last October the river waters rose more than 27 feet to bury this tranquil spot under six feet of water.

By October 18 the zoo staff had a good idea that the Guadalupe River was going to rise to high levels. It had happened before. The roads get cut off and a couple of staff members stay at the zoo to provide constant care to the animals. By the next morning the two caretakers were loading animals into portable cages and hoisting them on to the roofs as the flood waters continued to rise. On October 21, the zoo was completely cut off from the rest of the city.

A volunteer who helped rescue the animals called the roofs of the zoo poking out of the muddy water "Lake Zoobegone."

Of the 310 animals in the zoo before the flooding, 90 died and 70 escaped, said Debra Chronister, education director for the nonprofit zoo. The organization that usually operates the zoo on an annual budget of around $300,000 is now faced with a rehabilitation project of more than $2 million.

Dramatic rescues by staff, police, and fire department personnel in boats relocated most of the animals to higher ground. It was a week before the waters dropped to knee level and the staff could begin the cleanup. Three months after the disaster the ground is still so wet that a light vehicle sinks in the mire.

The hardest-hit area of the zoo was the reptile house. Glass cages floated and turned upside down. Some of the animals escaped, others were trapped. It was October 28 before serious cleanup was attempted on the snake house by Code 3 Associates, a Colorado-based animal rescue organization. On the organization's Web site (http://www.intrepid.net/~dodge/new.html) is a daily reporting of the Code 3 crew's activities in the Victoria area supported by the International Fund for Animal Welfare.

"Tomorrow Code 3 will start at the zoo by entering the snake room proper, and capturing any snakes that survived the flooding. This will be dicey as the room is dark, muddy, and all the containment systems up turned and open. ... There were at least 12 poisonous snakes in the enclosure," the Web site reports.

"I won't go down the complete list (of dead animalsfound in the reptile house) because it is too depressing," the Web writer says. As the crew worked their way through the building they encountered three rattlesnakes, one of which was very angry, two copperheads, a very fast coachwhip, and most of the zoo's collection of snakes and frogs, including the Louisiana pine snakes, an endangered species. The vampire bats and all the fish didn't make it.

By October 30 the cleanup of the zoo had swung into high gear with most of the animals moved to temporary shelters. The Web reporter wrote, "We have electricity, we have water. We have a bathroom. We have toilet paper, hear us roar." And roar in the face of mother nature the volunteers did. Using water cannons, shovels, and wheelbarrows, the army of workers rehabilitated the enclosures. The first residents were returned the next day.

"It was like a bad dream," Chronister says, "seeing some place I was so familiar with destroyed. It was extremely disorienting." Not only was the place that is more than a job to her destroyed by the flood, Chronister also lost her home. Through it all, Chronister and the other seven employees at the zoo have managed to stay focused on their goals. On Halloween, the zoo staff held the annual Zoo Boo at the National Guard armory instead of at the zoo.

The Texas Zoo plans to have a grand reopening in March. All of the buildings will have to be replaced or renovated, but the staff is looking forward to improvements. Until then they will continue their education programs on native Texas animals, including an exhibit at the San Antonio Livestock Show in February.

As the zoo rebuilds, it needs everything, Chronister says, from money to cleanup help. Call her at 512/572-4314 (http://www.viptx.net/texaszoo) to set up a date and then grab a few friends and volunteer for a day at the zoo. "Now that's a day trip," she laughed. Volunteers are needed to clean, build, and do office work. Monetary donations may be sent to the Texas Zoo Rescue Fund, Attn: Janet Tucker c/o First Victoria National Bank, 101 S. Main, Victoria 77901.

Of the hundreds of rescuers during the floods that hit South Texas in late October and early November, one of the more non-traditional is the Code 3 Associates and Riders on the Storm. The group helps pick up the pieces in the wake of disasters by helping local animal welfare professionals care for everything from house pets to livestock. During the floods the organization estimates that it came into contact with more than 400 animals, including 100 bodies, in the Victoria area. The group did not have the funds and personnel to mount similar efforts in Goliad, Cuero, and Del Rio. For more information, see their Web site or call 915/784-9168.

Janis Joplin Birthday Bash in Port Arthur at the Civic Center and the Museum of the Gulf Coast honors musicians from the Golden Triangle, Jan. 16. 409/985-5583.


399th in a Series. Collect them all.
More Day Trips columns 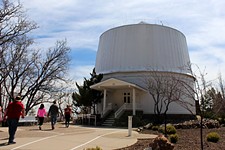