Naegelin's Bakery in New Braunfels turns 130 years old this year, bolstering its claim to being the oldest continuously operated bakery in the state. The fresh cookies, pastries, pies, and cakes from the family-run bakery are of historic proportions and a timeless quality.

"It's all in the preparation," says Wilburn Granzin, who has operated the bakery with his wife Nellie, two sons, and daughter since 1980. The Granzin family still uses recipes developed by the Naegelin family during more than a century of experimentation to get just the right ingredients.

Edward Naegelin arrived in New Braunfels in 1868 from Europe with less than a dollar in his pocket and a sack of flour draped over his shoulder. He built a thriving business making traditional German, French, and Danish pastries and cakes in the German community on the banks of the Comal River.

Naegelin's large pieces of ginger cake and homemade cider which sold for a nickel each were so popular with residents that a display in the Sophienburg Museum, the local history depository, honors the bakery. The museum is at 200 N. Seguin and is open Monday-Friday, 8am-4pm.

Wilburn and his family bought the bakery from Buddy Naegelin, a grandson of the bakery's founder. "Nothing much has changed" since the Naegelin family operated the bakery, Granzin says. "We've added a few things, but we're using the recipes from the original bakery."

As you walk into the front door of the bakery just west of the Main Plaza traffic circle at 129 S. Seguin Ave., the sweet smell of baked goods engulfs you like a warm blanket. The glass cases are full of what seems like an almost endless array and rainbow of cookies and pastries. It all looks good and trying to pick just one is too much of a challenge.

The bakery is still famous for their strudels that Naegelin perfected years ago. Granzin has added terrific sausage kolaches to the menu of fruit-filled ones. A popular favorite is the Lebkuchen, a thick, rectangular brown cookie covered with pink frosting. Naegelin's also makes a pretty mean doughnut.

Granzin says he doesn't eat breakfast even though he starts the day's preparation around 4am to start cooking by 6am. He does admit to having a doughnut now and then. "I just eat one," he says. "You eat too many and you start putting on the weight."

You can't rush quality baked goods, Granzin's kitchen secret. "You have to give the dough time to rise and then just the right amount of time in the proof box." The proof box is a pre-heating oven used before deep frying the doughnuts. "Too long in the box and the doughnut is too tough, not long enough, and it's too greasy," he says.

The biggest oven in the two-story bakery building was installed in 1942, he said. Many of his employees have worked for the bakery for more than 30 years and three-quarters of his 19-member staff worked for Buddy Naegelin. The "help wanted" sign is currently in the front window.

Wilburn Granzin began his baking career at ButterKrust Bakeries in San Antonio where he worked for 18 years. He then moved to Bill Miller's Barbecue as a baker. The last 17 years in New Braunfels have given him time to slow down a little bit. He says he has turned a lot of the business over to his children so that he works fewer hours.

"I'm past retirement age," Granzin says. "I hope my children will carry on the business. Sometimes you feel like they can't do anything right, but they generally do very good." With the Granzin children taking over operation of the shop, Texas' oldest bakery is preparing to satisfy the sweet tooth of another generation.

No wedding or breakfast table in New Braunfels would be complete without a Naegelin's Bakery cake or pastry. The bakery is half a block off the traffic circle around the Main Plaza and a block from the Comal County Courthouse. To get there, exit from I-35 at the Seguin Avenue exit and the bakery is on the right. You can buy fresh baked goods Monday-Friday 6:30am-5:30pm and Saturday 6:30am-5pm. Naegelin's is closed on Sunday. They take special orders at 830/625-5722.

Wimberley Jazz Concert Series at the Cypress Creek Cafe in Wimberley begins at 5:30 on Feb. 6 with the "Taste of Wimberley." Music happens Feb. 6-8 and Feb. 12-15. Seating is limited and advance tickets are recommended. 512/847-JAZZ or http://www.texhillcntry.com/wimberley.

Mardi Gras! in Galveston celebrates the 12 days before Lent with plenty of merrymaking, Feb. 13-24. The Strand Historic District becomes Texas' version of Bourbon Street with headliners Chuck Berry, Delbert McClinton, and the Fabulous Thunderbirds. 888/425-4753 or http://www.galvestontourism.com.

The Faust Brewing Company is taking over the space occupied by the Veranda Lounge in the historic Faust Hotel, 240 S. Seguin. New Braunfels' first brewpub will include a bar and grill when it opens in March. 830/625-7791. 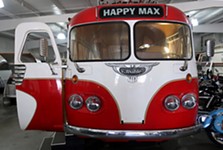