Tweet
print
write a letter
The heavy logs of old Fort Parker stand as a monument to the pioneers who settled in Texas. The fort is a replica of the one built by the Parker family in 1834. The rough-hewn logs of the fortress walls take the imagination back to May 19, 1836, when nine-year-old Cynthia Ann Parker was captured by Comanches.

There were many cases on the frontier of Indians capturing children, but Cynthia Ann's story became American folklore. Most of the men of the colony of nine families were away when a band of Indians came seeking food.

Grandfather Parker never made it to the stockade. The Indians attacked, killing him and then forcing their way through the open gates. Cynthia Ann's father, Silas, returned from the nearby fields in time to fight in vain to save his daughter, son (John), niece, and her baby. By the time that Silas' brother arrived from the fields, four were dead, four kidnapped, while a half-dozen hid. James Parker spent the years trying to rescue his family.

Traders reported seeing Cynthia Ann with the Indians. Except for her fair complexion and blue eyes, she looked and acted like an Indian. She married Comanche chief Peta Nocona and was the mother of Quanah Parker, the last Comanche war chief.

In 1860, a company of Rangers led by (future governor) Sul Ross attacked a Comanche village west of Vernon, killing Nocona and recapturing Cynthia Ann and her daughter, Prairie Flower.

Cynthia Ann never adapted to the Anglo environment and tried to escape several times. She died in Anderson County in 1864, shortly after the death of her daughter.

Three years younger, her brother John Parker refused to return to the settlement. On a raiding party, John came down with smallpox and was left for dead by the Indians; his Mexican wife nursed him back to health. After that, he refused to join the Texans or Indians, preferring to ranch south of the Rio Grande.

Despite the hardships, the land 40 miles east of Waco became farmland. Plantations took over family farms and slaves made "cotton king." After the Civil War, federal troops had to be stationed in the county seat, Springfield.

Across the Navasota River from Fort Parker, Springfield was hit by racial unrest and deva-stating fires; then, in 1870, the railroad passed the town by. The town was literally picked up and moved to Mexia and Groesbeck. All that remains is a cemetery in Fort Parker State Park.

According to Tom Fisher, park superintendent, the park was built by Civil Conservation Corp. Between 1935 and 1941, the company built the dam, roads, and buildings, including a 1936 version of the old fort.

More than half of the state park is taken up by the 750-acre lake that provides recreation, irrigation, and water to Groesbeck. The park has 25 campsites, 10 screened shelters, a day-use recreation hall, a seasonal store, picnic areas, and a primitive camping area. Hiking trails, fishing piers, and a boat dock promote a range of activities. Boat tours of the lake include views the wildlife. The park also operates the nearby Confederate Reunion Grounds for day use.

A few miles south of the state park, the Fort Parker Restoration is operated by Groesbeck. The current bulwark was built in 1967.

In 1992, the state parks department decided to close the fort. Groesbeck came to the rescue. Now volunteers operate the information center and gift shop next to the gate. 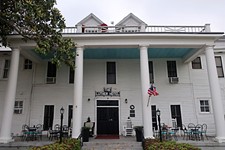