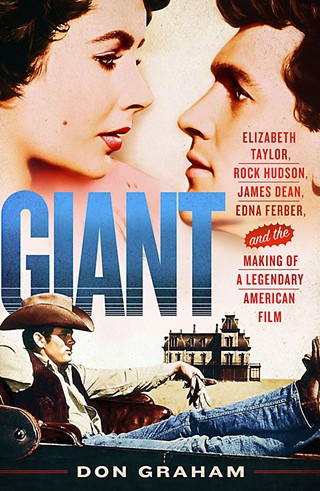 It's a miracle that Edna Ferber's novel Giant ever made it to the big screen, according to Don Graham.

Texans overwhelmingly despised the Texas epic novel penned by an outsider who played to all of the stereotypes of their land and people. Even more miraculous was when film production came to Marfa, Texas. "I was surprised by the absolute magnitude of the undertaking. Even shooting in Texas was a major decision then," said Graham, the longtime University of Texas J. Frank Dobie Regents Professor in American and English Literature, who recounts the story of the production in his new book Giant: Elizabeth Taylor, Rock Hudson, James Dean, Edna Ferber, and the Making of a Legendary American Film.

The move to woo Texans was a calculated one on the part of director George Stevens, who made a then-unheard-of decision to have an open set. The director brought in newspaper reporters from all over the country and invited amateur camera clubs to shoot endlessly. Graham said he wonders at the treasure trove of Super 8 film floating out there waiting to be gathered and shared. "How many times would you have the chance to see Elizabeth Taylor up close?"

Giant has long reverberated in Graham's own life, starting in his high school days when the film was fresh and new. "It just kept popping up in my imagination," he said. On his way to Los Angeles in 1986 to research what would become his first book, No Name on the Bullet:  A Biography of Audie Murphy, he and his now-wife Betsy Berry caught word of a big bash in Marfa celebrating the 30th anniversary of the film on the same Worth Evans ranch used in the film. The couple ended up sticking around for a few days. The film print never arrived for the screening, but there was a fine rodeo, Graham recalled.

When Graham talks (and writes) about Texas film and literature, people listen. Born in North Texas cotton country in Lucas, he graduated from the University of North Texas, had a five-year stint teaching at Southwest Texas State University (now Texas State), then moved on to the University of Pennsylvania. As part of efforts to increase English Department enrollment there, he was asked to teach a class in Western films. "I asked them why me and I was told, 'because you're a cowboy.'"

In 1976 he was hired to teach UT's Life and Literature of the Southwest course, and still does to this day. He became the expert on Texas on the big screen, authoring works such as Cowboys and Cadillacs: How Hollywood Looks at Texas, and his first look at Giant's cultural impact, 1998's book Giant Country: Essays on Texas. To the same end, Graham includes an index in his new book titled "Giant's Long Reach" detailing the film's cultural echoes. First on the list is Billy Lee Brammer's collected novellas The Gay Place, one of which is famously set during the Marfa filming. Don Graham
“I didn’t want to write a book about the film with 50 to 60 pages on the different scripts. I wanted a continuous narrative. I’m interested in the long-range impact the film had.”

His new book focuses directly on the production itself, and Stevens and Ferber loom large. Stevens was drastically changed by his World War II service, which included filming the D-Day landings, and became much more serious about the potential impact of filmmaking. Ferber, a Pulitzer Prize winner and child of Jewish immigrants, was also deeply affected by the war. The resulting impact in both the novel and the film is the story of racism aimed at Mexican-Americans in West Texas.

Graham recounted the story of Stevens hiring an African-American man he saw shining shoes for a small part in the film. "The local newspaper writes it up in a typical racist way," Graham said. "Stevens' World War II experiences led him to see [how] this kind of racism can lead to extreme measures. He wanted to show this to Texans, to hold it under their noses."

Graham also contends that Giant is "one of the better portraits of marriage in a film. ... They have lots of issues with their children, but it's funny that the children never do what they want them to." He said he believed those extra layers of story are why Giant endures. "What lifts it above other films of the era is its discussion of racism and its strong women figures."

The book comes to life because of his close focus on the characters behind it: director Stevens, and his leading actors – Taylor, Rock Hudson, and James Dean. Graham said, "All three big stars were in a way a problem. I didn't want to write a book about the film with 50 to 60 pages on the different scripts. I wanted a continuous narrative. I'm interested in the long-range impact the film had."

Consider the players: Rock Hudson, a closeted gay small-town pretty boy; child star turned stunningly beautiful/foul-mouthed/mother hen Taylor; and the indecipherable Dean. "James Dean tried to take over the film," Graham said. "Stevens had to fight with James Dean the whole time. ... He had something onscreen that was magic, but he was such a mess as a human being."

In the book, actress Carroll Baker talks about the Marfa set as being like high school, with the cool kids surrounded by wannabes like a younger Dennis Hopper, who idolized Dean and his method acting but was cruelly dismissed by him. Dean and Hudson didn't mesh, but Taylor befriended both. The other link between them was long tall Bob Hinkle, the dialogue coach who worked hard with Hudson to perfect his Texas accent. "They called him the Texas Talk Man. He and James Dean had an instant relationship. Dean knew Hinkle was a real Texan."

Dean's portrayal of the Texas oil millionaire versus Rock Hudson's King Ranch-like cattle baron in the film certainly inspired J.R. Ewing, and fed into the larger-than-life Texas stereotype. But it's something more. "When I was in France in 1990 there was a poster of James Dean in every bar," Graham said. "The camera loved that damn guy."

Graham writes of the day after Dean died in a car crash, his work on the film completed. Production on Giant continued in a Hollywood studio. Stevens, over budget and ever relentless to finish the film, shot Taylor from behind as her body shuddered with tears. His millennial students now are unlikely have ever heard of bygone stars like Rock Hudson and Elizabeth Taylor. "If it's not on their cell phones, they don't know it," Graham says. "But they all know James Dean's name."

Giant: Elizabeth Taylor, Rock Hudson, James Dean,Edna Ferber, and the Making of a Legendary American Film by Don Graham (336 pp., $27.99) is available now from St. Martin’s Press. Graham will be reading from the book at BookPeople, 603 N. Lamar, on Thu., April 12, at 7pm.

A version of this article appeared in print on April 13, 2018 with the headline: Standing on the Shoulder of Giant