Son of a Gun


How do the places we're from shape who we are and, in turn, who we become?

Justin St. Germain's mother was killed shortly after 9/11, and while it seems pretty certain her fifth husband pulled the trigger, technically the case is still cold. The book covers the gruesome details, but it's not quite a story about a death. St. Germain's carefully woven narrative shifts seamlessly in and out of the past, back and forth across the desert. He relies on his own memory, surreptitiously conducted interviews with a couple of his stepdads, and police reports to tell a story that is as much about his mother's life as it is about his own past, or as it is about Wyatt Earp, the legendary lawman from Tombstone, Ariz., the author's adopted hometown.

The story of Earp runs almost parallel to St. Germain's mother's. It would be hard to justify this insertion of a historical figure if not for the fact that the whole existence of the town is built around his famous gunfight. By pervading the culture of Tombstone, Earp too plays a significant role in shaping this particular history. And when writing about Earp, St. Germain seems to find satisfaction in correcting the more outsized (and even untrue) parts of the myth. He accomplishes this as well for his mother, who had earned a somewhat unfavorable reputation in town. This work seals her memory as a strong woman and a good mom. To that end, it is a sad yet beautifully constructed memorial.

Ultimately, Son of a Gun is a showdown with the past. As in any other duel of the days of old, the legend is determined by who walks away. – Danielle White

The Eye of the Mammoth


Had he never written his remarkable historical novels Remember Ben Clayton (2011) and The Gates of the Alamo (2001), on the strength of his essays alone, Stephen Harrigan would remain one of the most accomplished writers Texas has produced. His latest collection spans three decades and provides an excellent chronicle of how, beginning with the "nature beat" at Texas Monthly, Harrigan developed his extraordinary eye for detail and his unique ability to construct a compelling narrative from the disparate places, people, and artifacts the green world presented him.

He has said that he chose his title from his memory of the animal depicted in the Rouffignac cave paintings: "There is nothing prehistoric about it. It feels timeless and immediate, as if this long-extinct mammoth is looking at you, assessing you as you stand there in your own pocket of time, holding you in an unbreakable gaze as deep and ageless as a trance." That essay begins with a childhood memory of a Fifties science-fiction TV show featuring a baby mammoth briefly revived from the ice; Harrigan negotiates that transition as readily as a cave-painter determined to fix in the eye and mind his vivid and direct experience of the natural world.

Whether writing about the Alamo, the Chihuahuan desert, the Treaty Oak, or even the curious occupation of screenwriting, Harrigan's voice is always both riveted in the moment and slightly removed from it, as if he were judging every phenomenon on its own vital terms but also in the light of history before and after. All this in a prose seemingly as effortless and clear as the water in the Yucatan cenotes he explores with his family. Dive in. – Michael King Seat of the Empire: The Embattled Birth of Austin, Texas


For those who wonder why a statue of Molly Pitcher stands on Congress Avenue, Seat of Empire has a story for you.

Santa Anna's troops hadn't been gone long when scrapping began about where to settle the new government of the Republic of Texas. The irascible Sam Houston campaigned for the town named after him. Dreamer Mirabeau Lamar favored this here spot by the Colorado River.

Jeffrey Stuart Kerr's telling of this contentious chapter of Texas history is as colorful as the characters themselves. Besides Lamar, Houston, and their ensuing conflict that led to the grandly monikered Texas Archives War, the names within are familiar to Austinites as streets and landmarks, yet Kerr brings them to life: Edward Burleson, William Barton, David Burnet. As author of Austin, Texas: Then and Now and The Republic of Austin, Kerr knows this turf well, and he makes Seat of Empire an engaging, solid read.

So that's not Molly Pitcher down on Congress; it's local boarding house owner Angelina Eberly firing off the rebel yell for Austinites to rally and save the government papers from Sam Houston's Texas Rangers. The Rangers were eventually surrounded at Brushy Creek and surrendered the archives; the papers were delivered for safekeeping to Eberly. – Margaret Moser Swoon: Great Seducers and Why Women Love Them


Betsy Prioleau, author of Seductress and The Circle of Eros and former cultural history professor at NYU, conducted a thorough, if somewhat myopic, examination of how the greatest male lovers in history "en-swoon women" and what, ultimately, women want from these peacocking "ladykillers." The resulting nonfiction work is broken into two parts: an analysis of "Anatomy of the Great Seducers" – charisma and character – and a five-chapter explanation of "The Seducer's Way," which includes "lassoing love" relating to both the mind and the senses.

Prioleau's initial missteps stem from a pigeonholed perspective. Though it's an analysis sure to spark conversations, the reader is quickly assured of her primary demographic – the same target audience ogled and wooed by Hollywood's romcom marketing teams. Don't get me wrong: Romance is one of my favorite genres, and Prioleau's enjoyable sentence architecture and less-than-shy lexicon make for an interesting read. Yes, of course the book is entertaining: It is about sex, soul mates, psychology, and gossipy details about celebrities the likes of Casanova, Dionysus, Jack Nicholson, Ashton Kutcher, Carl Jung, and Johnny Depp. Swoon may even be enlightening, for those identifying with Prioleau's specific point of view – heteronormative, likely privileged, and generally comfortable with specifically defined gender roles. Prioleau does, paradoxically, mention the progress from our days as chattel and the apparently now-celebrated innate sexual nature of women.

Yet the rather apologetic and often, well, swooning descriptions of ladies' men (despite strategically placed acknowledgments of the drudgery of misogyny and quotes from famous feminists) make it hard to shake the feeling that Prioleau reduces women to a categorical, albeit complex, synopsis while simultaneously seeking to nail down the psychological intentions of victorious male lovers as individuals. So although the book is well-researched, intriguing (on par with a check-out lane Cosmo article), and worthy of a book club roundtable discussion (co-ed would be nice, but who are we kidding?), the inevitable question lingers: Why does "what women really want" have anything to do with men? – Jessi Cape This Town: Two Parties and a Funeral – Plus, Plenty of Valet Parking! – in America’s Gilded Capital


Mark Leibovich, a longtime D.C. reporter who’s pounded the pavement for The Washington Post, The New York Times, and, currently The New York Times Magazine, lives inside the Beltway. But is he one of them – that is, the wheeler-dealers in American government, media, and lobbies who simultaneously showrun and star in the spectacle – or one of us beyond the loop, eagerly inhaling their every political belch while comfortably sneering from a distance? That question currents throughout Leibovich’s lively vivisection of The Way We Politick Now.

The book’s title aside – a self-aware, hunch-shouldered har! about valet parking – sets the tone, and the takeaway is of a man at war with himself: In order to cover the beat, Leibovich has had to embed – because that is of course the popular parlance of the day – with the community on which he reports. Like it or not, he’s grabbed a plate at the buffet, been a perhaps-reluctant player in the grande bouffe that is D.C. politics, and This Town sometimes reads like a bulimic’s tortured purge.

That’s the dour version. More often, This Town is a deliciously bitchy – if such a word may be applied to the rigorously reported – picture of modern politics. The title’s “Two Parties and a Funeral” are laid out in discrete chapters: The memorial for the much-loved Meet the Press grand poobah Tim Russert is the opening salvo, while the book concludes at a party at WashPo “folk hero” Ben Bradlee’s home.

Also (cough) embedded in that subhead: a nod to partisan entrenchment and the inescapable feeling that something is deeply, possibly irreparably broken in our nation’s capital. This Town is too raucous a read to overdo the doom-and-gloom, but still: The best wakes are the rowdier ones. – Kimberley Jones 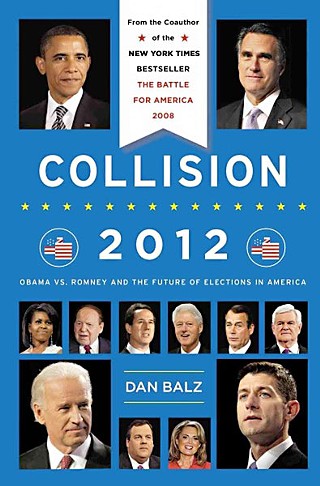 
Dan Balz's encyclopedic history of the 2012 presidential campaign is firmly in the Broderian school of establishment journalism (with both its virtues and vices), and the reader's response will depend heavily on her patience with that exhaustively "objective" approach to its subject. The Washington Post's "chief correspondent" recounts virtually every important moment of the two-year marathon, a strategy that works well with the backstage detail credentialed access provides but founders amusingly when it requires treating the string of Republican primary wannabes with equal seriousness.

Just reciting the litany evokes a retrospective guffaw: Barbour, Bachmann, Huckabee, Trump, Palin, Cain, Perry, Paul, Pawlenty, Gingrich, Santorum ... Balz marches dutifully through those players like a polite casting director yearning to get to his star – Mr. Inevitable, Mitt Romney. It's worth noting that some of the most entertaining reading is the recapitulation of a group that even Rick "Flaming Plummet" Perry called "the weakest Republican field in history."

Ted Cruz wasn't even a glare in Rick Perry's eye two years ago, so we have yet more political farce ahead of us. Balz's title refers to the "collision" between the 2008 electorate that first chose Obama and the 2010 voters that won the House for the Tea Party and its increasingly uneasy masters. Despite Obama's victory, he acknowledges that the battle has not been resolved, and the country remains as polarized as ever. The current D.C. deadlock, triggered by the GOP's outraged refusal to accept the 2012 outcome, has made that election seem almost ancient, a contest with dubious adversaries and no substantive result.

In Balz's telling, Romney becomes a sympathetic but befuddled figure, reluctant to run and yet self-deluded about both his actual prospects and his own contributions to defeat. As the book closes, he's trying to explain away his biggest gaffe – "the 47 percent" – and literally cannot accept his own words, and what he and his most earnest and monied supporters firmly believe.– Michael King