In the Thicket of It

Prolific Texan author Joe R. Lansdale is back with a hellish and hilarious new novel

Since we last caught up with the Nacogdoches-based yarn-spinner and creator of some of the dad-gummest ripping yarns this side of a countrified Boys' Own serial, Stephen F. Austin State University's writer in residence has, if anything, cranked his written output up to 11 and scorched the knob off, resulting most recently with his new book The Thicket (Mulholland Books/Little, Brown and Company).

Like pretty much all of Joe R. Lansdale's bibliography, it's a Mr. Toad's wild ride of a story, chronicling the misadventures – both hellish and, as often as not, hilarious – of a righteous lad named Jack searching for his kidnapped sister Lula amid the inhospitable environs of East Texas, circa 1910. With his parents dead of the pox and his beloved grandfather shot dead by those very same kidnappers, Jack embarks on a desperate quest to bring the vermin to justice and his sibling back from hell itself.

It's classic Lansdale, his own self peppered throughout by much piney backwoods philosophizing on everything from religion to whoring, thick but never overloaded with racial commentary, dime-novel villainy writ large, and the author's long-ago trademarked heaping helping of wry, often delightfully vulgar humanism. The Thicket is a keeper and then some. It's already attained a prominent place atop our perilously wobbly bedside stack of Lansdale's books, comics, films, and ephemera that nightly threatens to concuss us should we so much as roll over in our sleep. (Did we mention he's won plenty of awards – Bram Stokers, Edgars, Mystery Writers of America, etc. – in the process?)

The Austin Chronicle spoke with Lansdale by phone on the eve of his appearance at the Texas Book Festival.

Austin Chronicle: So many of your books are set in a very specific turn-of-the-century timeframe or Depression-era East Texas locale – The Bottoms, Edge of Dark Water, and now The Thicket. How much research do you have to embark on to create that famous Lansdale historical verisimilitude?

Joe R. Lansdale: A lot of it I know from just growing up out there. My parents being older when I was born – my dad was fortysomething and my mother was in her late 30s – they had a lot of stories of the Great Depression, and my grandmother was nearly 100 when she died in the 1980s. She had been to Buffalo Bill's Wild West Show even though it wasn't really his show anymore, but he continued doing some version of it up until 1917. But my grandmother ... was born in the 1880s, and as a little girl she saw it as it was traveling through.

So I had all of those stories and I certainly did some research, too, but I'm interested in those eras, so I've read a lot about them as well as had those personal stories told to me.

AC: Your prodigious output over the years encompasses everything from hundreds of short stories, the eight-books-and-counting series of Hap and Leonard novels, 13-odd other novels, a four-color plethora of comic book/graphic novels (Jonah Hex, Lone Ranger & Tonto, Batman), collections, anthologies, and screenplays galore, including the cult hit Bubba Ho-Tep. How on Earth do you find the time to read any other authors ... or, for that matter, sleep?

JRL: I read quite a bit. I generally read three or four books a week, although some weeks I might not read any, some weeks only one.

AC: What are you reading right now?

JRL: I've been reading a collection of Wallace Stegner's short stories, and this morning I just finished reading the Dark Horse Korak, Son of Tarzan Archives. Talk about two things that are about as far apart as you can get! I also read a Harry Whittington novel on the plane [the other day].

AC: Your 1989 novel Cold in July is currently being filmed by We Are What We Are and Stake Land director Jim Mickle with Sam Shepard, Michael C. Hall, and Don Johnson in the leads. What's the status on that?

JRL: They've finished shooting, and they're working on post now. What I saw of it looks great, but of course the editing's being done now, and it depends on that. It should be out next year sometime, and I'm really excited about it.

AC: You have a pretty sprawling online presence between your own personal site, the fan site, and social media in general. I'm curious how you view this ongoing move from the printed and bound word versus its digitized and streaming echo? Because, obviously, that's changed and continues to change publishing in so many ways.

JRL: I think it's really helped. I'm not really a big fan of wanting to [be online], but I always enjoy it when I do do it. I enjoy communicating with the readers, and I think it's starting to give a larger outlet to my books and films and all the things I'm interested in, and so I would say it's been a big plus.

JRL: I don't use either one, although I'm not opposed to it. I think reading's reading and books are books, but I prefer an actual book I can hold in my hand and smell and collect and put on my shelf and take down when I want. I don't mind electronic books, but it seems less personal to me. It seems to me that if that's the wave of the future then that's the wave of the future. 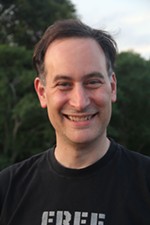