If Neal Barrett Jr. wrote about Neal Barrett Jr., he might not even tell you he's a writer. You'd have to look for the details: the books on the shelves, the awards on the walls. In his words, he leaves clues, not statements. Unless you walked in on him at the keyboard, you'd just see a graceful, white-bearded semi-retiree, sharing a root beer with his silver-haired bride Ruth, taking photographs of the flowers and wildlife in his backyard. Maybe even building the odd model airplane. "Mostly what we do is right here, with the cats and the fish," he says.

But Barrett is a literary lion in winter. At 83 years old, the San Antonio-born writer has seen the publishing industry flux, flex, break, and reassemble. The publicity photo on the back of his latest printed work, Other Seasons, shows a toughened, graying ranger. In person he is older, gentler, dressed like he just got back from his 2010 trip to Coco Beach, where he was lauded as Author Emeritus by his peers of the Science Fiction & Fantasy Writers of America.

Based on longevity alone, he has a career for which most authors would sell their agent's soul. On the wall of his South Austin home, there's an array of covers from four decades of publications. For a while, two-fisted and steamy Westerns penned as Clay Dawson and Chad Calhoun paid the bills. There was even a stint writing Hardy Boys adventures under the shared pseudonym of Franklin W. Dixon. Never afraid to get his hands dirty with what some authors would deem beneath them, he wrote movie novelizations. Then his early science-fiction and fantasy books came at the crest of the mass-market paperback, and by the 1990s, when most of his peers were eying retirement, he was hitting his stride as an innovative genre author. "What I do is write," he explained to the Chronicle. "I've slowed down a little bit, but for over 50 years and 50 books, I didn't slow down."

It's not the pulp that has sealed his literary reputation. He may not be a household name, but check any must-read list penned by his fellow Texas science-fiction and fantasy authors, and his works will be on there. Before it was cool, he was a bastion of what Bruce Sterling dubbed slipstream – not quite science fiction, not quite fantasy. Others have seen him as a traveler in the badlands of mojo, that superstition-tinged realm of Texas fiction by his good friend Joe R. Lansdale. Sometimes Barrett has been placed in a category all of his own – off-center, taken from his 1992 short story anthology Slightly Off Center. As he put it, "If there's a galaxy far, far away, the guy I'm interested in is the guy just outside the space port selling hot dogs, not the kings and queens of space." 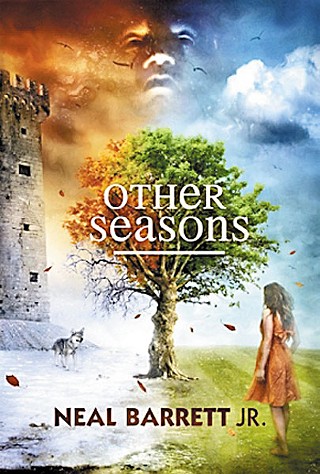 Other Seasons gathers together the threads of Barrett's career as a short story writer, and that's where his style has been most defined. He's an heir to The Twilight Zone, his characters trying to survive phenomena rather than explain them. In "The Heart," he plays carny games as his West Texas traveler examines freak show oddities for seams, to see if they're real or gaffs. The dream police of "Nightbeat" listen to the world through the lens of synesthesia. As for "Tourists," it's a day trip to a destination whose name you'll only know as you're leaving the city limits. He gives just as few clues when he's talking about a sentient starship as when he puts incongruous historical figures together. In "Sallie C.," he dumps Pat Garrett, the Wright Brothers, and Field Marshal Rommel's mom in a dusty New Mexico railroad stop and lets the sparks fly close to the narrative tinder. He said: "They were there for no particular reason, but what great characters they were! Nobody had a good reason to be there. What if you had a story where everyone had a good reason to be there? They're all life insurance agents in a hotel. Well, what's going to happen there? Nothing."

That's the contradiction and tension within Barrett's work: The real and strange rub shoulders like old workmates. His characters don't look to the stars; they just worry about getting the stench of spaceship fumes out of their clothes. Even in the most fantastical environments, it's all about the daily grind. So he writes from the back of Plato's cave, where the characters walk past mid-sentence and leave to an undefined future. "I like the school of leaving things out," he said. "I'll tell you enough to let you finish, and guess what's going on, but not to be frustrated or say 'I don't understand all this.' ... I've had people at conventions say, 'Well, what color was that guy's shoes? What did he look like?' I want to say, you're really ruining it, aren't you? You're putting a life into him that I didn't give. You need give him the kind of life to do what he did. I had characters that are only recognizable as people because you know that they are – and some of them aren't."

But that was always in his novels, too. Take 1999's Interstate Dreams. There's not much proactive about the protagonist, Dreamer. He doesn't want to work, doesn't want the heavy lifting of a real relationship, isn't even that interested in finding out why a war wound now leaves him invisible to electronic recording devices. Most people would wonder about that, but not a Barrett character. He said: "Everything I've ever written, including science fiction, Western, or mystery, is about the guy who doesn't want to have an adventure. The last thing he wants to do is have a problem or solve a crime or get involved in anything. Those are the best kind of people, because you toss them in a mess and they know what to do – get out as fast as possible."

You could say it's a Lone Star state of mind. "Texas was formed in that way by people who couldn't get along anywhere else," Barrett said, and that's what defines his characters. Like Lansdale out in Nacogdoches and another Austin writer and friend, William Browning Spencer, he's sometimes been described as a regional author, and that hasn't always made his career easier. He once had an out-of-state editor suggest he shift a location. Barrett said: "He told me, 'I've got a map here, and there isn't any place called Gonzales.' So I said, 'Well, I'll go down there and see what they did with it, because it used to be down there.' ... I've had people say, 'If you only change this or that in a book, I think we can print it.' But why? My people wouldn't be in Michigan."

He sums it up with a story. In 1980, he wrote Long Days and Short Nights, the centennial history of the Y.O. Ranch. So he was there for the near-mythical party when rancher Charles Schreiner III, dressed in tux and cowboy hat, rode one of his beloved longhorn cattle right into a party in the ballroom. Barrett recalled, "Everyone was singing 'The Eyes of Texas,' and everyone waved, and there was this couple from New York standing near us, and he said to his wife, 'See honey, I told you what it was like down here.'"

But the days when Barrett could drive from Austin to his wife's familial home in Llano without seeing another soul are gone. Like his Texas, his publishing industry has changed. Barrett is a veteran of the midlist wars, where publishers abandoned armies of authors to make heroes out of bestsellers. That's been to the detriment of book shops, readers, and publishers themselves, and nowhere has the damage been worse than the reprint lists. "There's no place in the world that you can go, 'This was a good book 18 years ago, will you publish it again?'" Barrett said. "Random House would say, 'What for?'" But he's not going down without a fight. Where other authors of his age and ilk have faded into secondhand store shadows, he reissued many of his novels as e-books through Crossroads Press. "I'm not making a fortune," he admitted, "but at least the stuff I've done in the past that you were never going to see, you can see it now."

Other Seasons: The Best of Neal Barrett Jr. is available now through Subterranean Press. His new short story, "Bloaters," will be published alongside works by Neil Gaiman, Joe R. Lansdale, and others in Impossible Monsters, a collection edited by Kasey Lansdale and due out in July.

News/Print
My mouth is like the motherfuckin' Sahara Desert up in here.

Postscripts
Is the movie better than the book? In the case of Into the Arms of Strangers: Stories of the Kindertransport, that old argument seems a bit moot.