So what draws graphic novelist Hope Larson to Madeleine L'Engle? 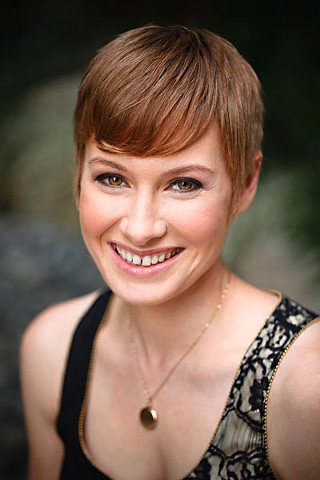 Hope Larson's career has been on a rising trajectory for years – not an easy thing for a woman working in the male-dominated field of comics, but her bold linework and sharp writing make the fact that she jumped from tiny indie publisher AdHouse Books to the venerable Oni Press to Simon & Schuster's Atheneum Books seem like a logical progression. Her latest project is a lovely, young readers-oriented graphic novel adaptation of Madeleine L'Engle's A Wrinkle in Time from Farrar, Strauss, and Giroux.

Austin Chronicle: Were you ap-proached for this project, or was it something you'd dreamed of doing?

Hope Larson: I was approached by the publisher, but I'd been a big fan of the book my whole life. I'm a huge Madeleine L'Engle fan, so when I got the job, I approached it as a passion project.

AC: The characters and the images in the book are such an important part of so many people's childhood imaginations. How did you approach giving them form?

HL: I tried to stick as close to the descriptions that are in the book as possible. The way that I remembered the characters looking, it turned out, was not really accurate, once I started to work on the script. So I just tried to be as literal as possible with the descriptions. Aunt Beast was really fun to draw. I really liked drawing all the landscapes on Uriel, and I also really enjoyed the first segment of the book that takes place on Earth. The book takes place in the late Fifties or early Sixties, so basically it's a period piece, and getting to research what things looked like in that time and draw it in was fun.

AC: What was your process like for creating the script? 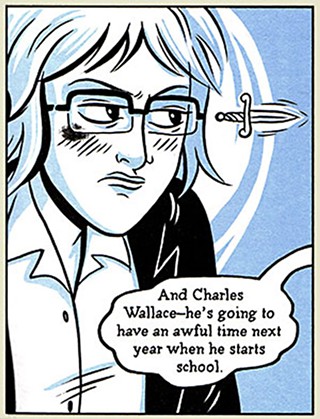 HL: The script that I wrote looks a little bit like a screenplay. It's mostly dialogue, and just a little bit of description. But I included the entire text of the novel, so it's very faithful. The main thing that I did was break down the action into comic-page-sized chunks, so I could figure out what would fit on each page of the book, and how long the book would be before I sat down to draw it. You just kind of feel [the pacing] out. I wrote the script chronologically, and I drew the book chronologically. You just kinda roll with it. This is my fifth book, and after you do hundreds of pages of comics, you just get a feel for it.

AC: Did you consider doing more colors at any point?

HL: That wasn't really up to me. It would have been really cool to do full-color. That's actually been the number one complaint that I've heard about this version – that it isn't in full-color. People want to see the rainbow wings on the creatures on Uriel, and they want to see the red eyes on The Man With Red Eyes. But that was never my call. I'm lucky that we got to have a spot color at all. When it's 400 pages long, it really limits your options. There's not really much I could have done to represent red without the color. I think at the time, I was just like, "This is kinda weird, but I'm gonna roll with it." But it's at least called The Man With Red Eyes, and they refer to his red eyes, so hopefully people can use their imagination a little bit in that chapter.

AC: What were the other parts of the book that were really challenging to translate?

HL: The ball-bouncing and rope-jumping sequence on Camazotz was really hard, because it's all about rhythm and action, and there are a lot of different kids participating. And we didn't have a lot of pages to draw that sequence. It's actually just one page. My editor and I went back and forth a few times to figure out how we could do this in as compressed a way as possible and still get the idea of it across. I think a lot of the time, it's the parts that you struggle with where you end up with a really cool take on it, because you had to think about it so much harder than everything else.

A Tribute to Madeleine L'Engle