Hip to the Lit 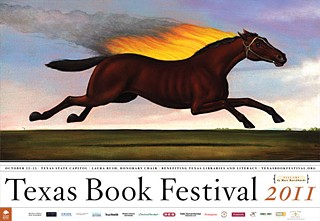 Couldn't you just taste the fall crisp in the air on Monday morning? Further proof our favorite season is just around the bend: The lineup for one of fall's finest traditions, the Texas Book Festival, was just announced. It'd take us the bulk of this page to list every one of the 200-plus authors who'll be bullish on books come Oct. 22-23, but here's the highlight reel:

As befits a festival set at our state Capitol grounds, books with politics on the brain are well-represented here, including Jim Lehrer's Tension City: Inside the Presidential Debates and Sally H. Jacobs' The Other Barack: The Bold and Reckless Life of President Obama's Father. Other nonfiction selections look farther afield, to India (Siddhartha Deb's The Beautiful and the Damned: A Portrait of the New India), to Mexico (Ioan Grillo's El Narco: Inside Mexico's Criminal Insurgency), and to the Middle East (James Zogby's Arab Voices: What They Are Saying to Us, and Why It Matters; Robin Wright's Rock the Casbah: Rage and Rebellion Across the Islamic World).

Austinite Lawrence Wright knows a thing or two about the Middle East – okay, more than a thing or two; he's a leading authority on al Qaeda. Wright and fellow Austinite Stephen Harrigan (Remember Ben Clayton) are this year's recipients of the Texas Writers Award. Other familiar faces from these environs include Amanda Eyre Ward (Close My Eyes), Louis Sachar (The Cardturner), and recent Chronicle cover boy Ernie Cline (Ready Player One).

You can check out the entire lineup at www.texasbookfestival.org; you'll also find info there on how to become a TBF member (benefits include a "fast pass" to the front of the line at panels and in the signing tent). And keep an eye on this section, where we'll be profiling TBF authors in coming weeks.