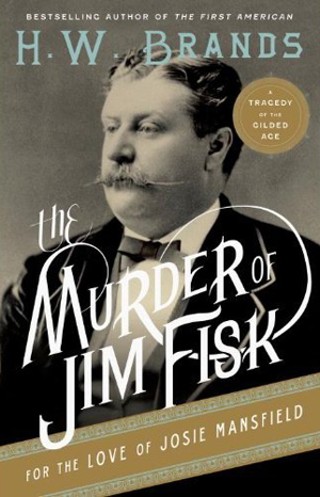 The Murder of Jim Fisk for the Love of Josie Mansfield


Two-time Pulitzer Prize finalist and University of Texas professor H.W. Brands has a flair for the dramatic, which means his histories often read with the verve of great fiction – or, in the case of The Murder of Jim Fisk for the Love of Josie Mansfield, a sudsy melodrama, this one starring a scalawag, a showgirl, and a pistol-wielding pretty boy.

In the first of a new series called American Portraits, Brands shaves down the sprawling purviews of previous works (including 2010's American Colossus: The Triumph of Capitalism, 1865-1900 and 2008's Traitor to His Class: The Privileged Life and Radical Presidency of Franklin Delano Roosevelt; did we mention the author is also absurdly prolific?). Here, in a comparatively slim 224 pages, Brands revives characters most of us only faintly remember from a high school history class unit on the Gilded Age: "Boss" Tweed of Tammany Hall, Cornelius Vanderbilt ("The Commodore"), and Jay Gould. For the purpose of this book, though, these boldfaced names occupy only the periphery; front and center is Jim Fisk, Gould's partner in speculation, railroad takeover, market manipulation, and general chicanery.

The title of the book thoroughly tips its hand as to Fisk's fate – he's dead by page 98 – but Brands has a lot of fun getting there, detailing Fisk's many corrupt dealings as a partner in the Erie Railroad and his key role in the Black Friday financial panic. Surprisingly less fun – or, at least, disappointingly scrimpy with the dirt – is the rendering of the married Fisk's relationship with the markedly younger Josie Mansfield, a divorcée and "actress" who was just as much a schemer as her porcine lover. When a rival enters the picture – Ned Stokes, a smooth-talking oil man – an epic tussle over Josie ensues, with charges flying about of blackmail and libel and other unsavories. Murder most foul does indeed take place, but what happens next – a protracted battle in court – is edge-of-the-seat stuff (that is, if you haven't cheated and checked Wiki­ped­ia for the court's decision). Using court transcriptions that have the effect on the page of mimicking thumping monologues and heated back-and-forths between prosecution and defense, the narrative whizzes by in short, breathless chapters. By the end, the reader is spent – riots! failed love affairs! corruption mills! – but also rather purring with virtue, because history, after all, is good for you.

Jim Fisk, Gilded Age, The Murder of Jim Fisk for the Love of Josie Manfield