You Know Nothing of Their Work

Don Graham and the many minds of Texas

Six days after our lively interview at an Arboretum-area Starbucks, Don Graham sends me an e-mail that contains the following quotation from The New York Times: "'When they think of shows filmed in Texas, they usually don't think that's going to be a smart, intelligent, upscale drama,' Mr. Bark said. 'There's sort of a built-in subtraction of I.Q. points when people think Texas.'"

The Mr. Bark in question is Ed Bark, a former critic for The Dallas Morning News, and the subject is why, on television as elsewhere, hackneyed depictions of our fair state tend to win out over richer fare – the latest example being the two-epidodes-and-out Lone Star.

It's the kind of offhand regional slam that Graham, longtime J. Frank Dobie Regents Professor of American and English Literature at the University of Texas and veteran teacher of the storied Life and Literature of the Southwest course there, rarely fails to notice. After all, it's both his mission and his job to point out that, while it may be true that many people don't expect works that are, in Bark's words, both "smart" and "intelligent" to emerge from Texas culture, those people are sadly ignorant.

While Graham is well aware of and quick to point out the ways in which the larger culture has utterly failed to understand the complexity of its regional variations, he operates in the spirit of rigorous enlightenment, not zealotry; he is not to be mistaken for what he calls "a Texas superpatriot," and he detests the term "Texana." In his course as well as in numerous books, essays, articles, and talks, he focuses on Texas writers with national reputations, taking to task stereotypes but also simply bringing great work to the fore and letting it speak for itself.

His latest book, State of Minds: Texas Culture & Its Discontents (available Feb. 1 from UT Press), is a diverse clutch of pieces he published in the 1990s on everyone from John Graves to Mary Carr, Larry McMurtry and Cormac McCarthy, Patricia Highsmith and Donald Barthelme. Graham's approach is clear-eyed and incisive, unostentatiously applying huge cultural and literary intelligence, along with a quick style and sharp wit. It demands, as it should, that we take Texas culture seriously.

Austin Chronicle: What was the impetus to publish this collection now?

Don Graham: To tell you the truth, I got kind of worked up by people at UT, faculty members saying, "There isn't such a thing as Texas culture. It's an oxymoron." I thought, "Well, they don't know anything about Texas writing." I decided to put together a book that addresses that. I didn't know to what degree it would be a unified book. There were other things I could have put in it, but in the end that's what I wound up with.

AC: What are some of the things you left out?

DG: I left out one of my favorites. It's kind of an outrageous essay called "Bestiality Studies," and it proposes that every aspect of gender and sexuality's been studied at the University of Texas except bestiality. It's never really been explored. It's kind of satirical, it's got a lot of funny stuff in it, but one of the readers [at UT Press] thought it was a mistake. So I decided, instead of fighting with the press about it, it might be a mistake. I just dropped it. I realized then that it was a good decision in one respect: If I had "Bestiality Studies" as a title, I would probably be bombarded with bestiality sites on the Internet.

AC: Are you taking a jab at gender studies and things like that in the academy?

DG: No, but I've always thought that literature was interesting in and of itself – its relation to human emotion, experience, history, place – that it didn't need this kind of structure of theory surrounding it or explaining it through theoretical lenses. I kind of was lucky in that I graduated before that heavy theory hit. I'm sure it produces some great insights, but you have to wade through a lot of bad writing. I do like to take shots at sacred cows, apparently.

AC: Because you're a cowboy? A literary cowboy?

DG: The funny thing is that I grew up with cotton farming, which my "Lucas" [Texas] piece makes clear. I'm not a cowboy. I don't like horses, don't know how to ride. I don't have a pickup, I don't have a gun, et cetera, et cetera. I do now wear symbolic boots [laughs].

AC: In States of Mind, you write a little about writers who distance themselves from the "Texas writer" label. I think you wrote that Larry McMurtry once said there was nothing particularly Texan about his writing.

DG: I know, which is ridiculous. I don't know why Larry said that. I don't think anybody in the past or now wants to be identified solely as a Texas writer. There's a big advantage in being identified as a Southern writer. But a Texas and a Western writer, they just never had the kind of standing nationally.

AC: Why do you think that is?

DG: My theory is that the East Coast is only interested in Southern writing so much because it's about race and it's Gothic. It fits their idea of the South – that the South is full of crazies, religious nuts, and racists. Whereas they don't really have any idea about the West at all. 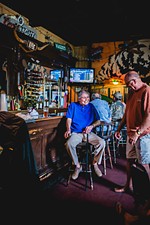