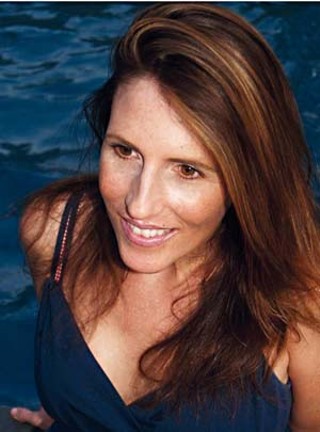 One of the hardest things about moving away from Austin was losing the community of writers of which I'd been a part since the days of Texas Circuit readings at Liberty Lunch back in the Seventies. But when I wound up in Baltimore in 2009, I found a scene like the one I'd been missing – a thriving, ungated community of writers and readers who comment on one another's work, get together for coffee, and share connections. It's common after literary events in "Bawlmer" to invite the whole audience to go out for drinks with the readers – you can't get much friendlier than that.

It was at one of these events that I discovered a writer named Jessica Anya Blau. I first heard her read a short story in a reading series held above a vintage clothing store, and her humorous take on warm, loving families with adulterer parents and drug-dealing children made me slap down the cash for her first novel, 2008's The Summer of Naked Swim Parties. It's a coming-of-age story set in Santa Barbara, Calif., in 1976; the 14-year-old protagonist doesn't get much help from her pot-smoking, free-loving parents as she navigates her first experiences with boys and booze.

The family dynamics, the hilarious dialogue sprinkled with Yiddishisms and profanity, the outrageous moments: These elements are even stronger in Blau's second novel, Drinking Closer to Home, to be released this month. Drinking Closer to Home brings together the adult children of the Stein family when their mother has a heart attack. The action flips between days spent in the hospital and flashbacks to their childhoods in the 1970s and 1980s.

The domestic relationships in the book are brilliantly rendered, a contemporary California version of Philip Roth. There's a scene in the 1970s where the grandparents, Bubbe and Zeyde, are coming for their annual visit. The entire family has mobilized to clean the house. Here's Mom and Dad:

Louise gathered up the sheets, a burning cigarette dangling from her mouth. She stared down at Buzzy, who was reading a crumpled piece of paper. Louise shifted the sheets to one arm, pulled her cigarette out, and pointed it at Buzzy as she spoke.

"Buzzy, fuck the trash, get the plants."

"She may have thrown out the receipt from when I had the oil changed on the car last week, I can't find – " Buzzy dropped his head back into the trash can.

"GET THE FUCKING PLANTS!" Louise lifted her cigarette hand and pushed a sweaty strand of brown hair out of her eyes. Portia was stilled by the suddenness of her mother's anger.

"Dad," Anna said, "You have to chop down the marijuana plants." She was the only one bold enough to insert herself into her parents' arguments. ...

Emery looked up from the Masterpiece Game; he was separating the painting cards from the value cards.

"We have marijuana plants?" he asked.

Blau has called this "a memoir with changed names," and the book includes a postscript section in which her real family comments on their fictional doppelgängers. "I think I got off easy," notes her father, which is saying a lot. 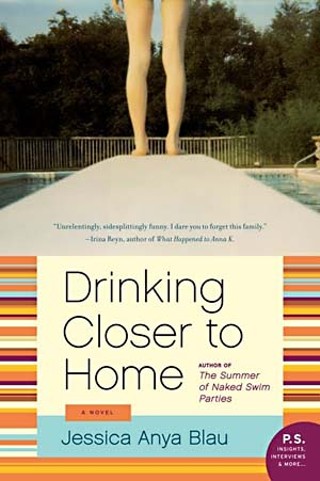 Not long after I fell in love with her work, I learned that Blau lives around the corner from me. Now her teenage daughter Ella babysits my daughter Jane, and her husband David has had the gall to beat me at Scrabble. So this morning she made me a nice bowl of oatmeal in her kitchen and we talked about the book.

Austin Chronicle: If it's a memoir with changed names, why not just write a memoir?

Jessica Anya Blau: So I could make it a more interesting story. For example, there's a scene where the family rents a vacation home on Fire Island. During their week there, the brother comes out of the closet, the sister reveals that she's cheating on her husband, and the dad announces he's going to leave their mom. All those things happened, but not at once. And the ending – well it could have happened that way, but it didn't.

AC: The title, Drinking Closer to Home, refers to a comment the grandfather makes after a pretty harrowing incident. That really happened?

JAB: In 1939, when my mother was 4 months old, my grandfather and grandmother put her baby basket in the back of their convertible and went for a nice fall drive. They had the top down, but the baby was all bundled up. They drove pretty far. They stopped at an inn in the countryside, leaving my mother asleep in the car. Then they started drinking and drinking and got so trashed they asked for a key and went up to a room. In the morning they remembered they had a baby. They ran down, and she was frozen. Literally. There was frost on her. So they rushed her to the hospital, she was in for two weeks, and she miraculously recovered, thanks to being one of the first civilians to be given penicillin. My grandfather's comment on this was that the lesson that he learned was always to go drinking closer to home.

AC: [in horror] He actually said that?

JAB: [hesitates] Well, I think he did. That chapter was one I wrote and rewrote so many times now that I'm not sure if my grandfather said it or not. ... Um, we could call my mother and ask her.

[A phone call to California is made.]

Jessica's Mom: The incident happened just the way she wrote it. They almost killed me, and then they spent the whole two weeks I was in the hospital in Florida. Only that penicillin saved me, thank God. They had to call them to come home when I got better. But no, he didn't say the thing about drinking closer to home. Jessica made that part up.

AC: Well, your making it up is to me a natural extension of the coping strategy of the family in the book, in which the characters continually joke about things that are serious and painful, where humor is used as a survival skill.

JAB: I have a family that teases each other relentlessly. You go to rehab, you have a zit, you have an affair, they're all talking about it and asking you about it. And nobody will take anything seriously. You have a breakdown and you're depressed, everyone starts making fun of you. Eventually you start laughing.

My mom and dad once got in a huge fight. My father was screaming so loudly that my mother shouted, "Shut up, the neighbors are going to hear you!" "Fuck the neighbors!" my father screamed. So she told him again to shut up, and my dad ran outside – and by the way, we lived on a cul-de-sac full of really WASPy people, all with perfect lawns – and he was leaping up and down, screaming "Fuck the neighbors!" over and over. My mother, sister, brother, and I were standing on the porch looking out at him, completely horrified and embarrassed, but within days it was a joke. Even now, my sister makes him Chanukah cards and birthday cards with a little cartoon guy leaping up and down, and in his word-bubble it says, "Fuck the neighbors!" 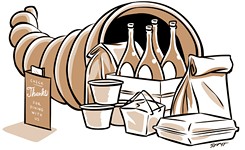 Those Lazy, Crazy Days of Winter
A holiday out beats a holiday in