Here's any easy way to figure out where a noir novel is set: If your hero drinks whiskey, beer, or vodka, it's in America. If he drinks coffee by the gallon, it's Sweden. If he drinks Calvados and the occasional Prosecco, it's Italy, and your hero is a 47-year-old ex-con turned private investigator named Marco Buratti.

Buratti spends a decent amount time in Bandit Love doing pleasant European things like eating duck ragout, having sex, and meeting people in pastry shops. But this is all in pursuit of a larger goal, which is figuring out who kidnapped his friend Rossini's girlfriend, and then figuring out what the kidnapping has to do with a crime that Buratti, Rossini, and a third man named Max committed years ago.

The answer, of course, is complicated, but it involves the improbably named villainess Greta Gardner, a drug heist, and the Kosovar mafia. In the end, it's a little disappointing how easy this mystery is for Buratti and his friends to unravel.

Bribery buys our heroes a lot of information – which may actually be the way it works in Italy – but it's a pretty boring way to solve a crime. As for action, a daring raid on a creepy den of sex slavery goes off with nary a hiccup and involves nothing more complicated than entering the house and shooting a few bad guys. A gold heist occurs between chapters, because what reader would ever want to be troubled with the boring details of a frigging gold heist? (We do at least get a brief recap, eventually.)

Some crime novels are really books about the workplace, and they pay meticulous attention to how a criminal does his job. This is not such a book. Author Massimo Carlotto has a bigger agenda and more expansive concerns: the blossoming of crime syndicates across the Balkans and Eastern Europe, the interdependency of the drug and sex trades, and the way his beloved Italy has been drawn into that vortex of corruption and exploitation. "Bandit love," we're told, can drive a man to seek "vengeance for a woman who no longer exists" – and for a world that's slowly dying.

Poisonville
Perhaps some of the pizzazz got lost in the translation? 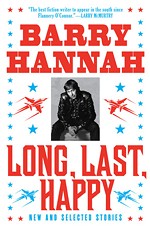 Long, Last, Happy: New and Collected Stories
This posthumous collection showcases Barry Hannah's wit, his humor, and an ear finely tuned to the myriad dialects of the South