A twice-married virgin wanders sexually liberated Vienna and collides with – who else? – Freud A Curable Romantic: A Novel


Before Franz Ferdinand met his untimely end – the first domino toppled in the worst period of persecution for the Jews of Europe in history – A Curable Romantic's Jakob Sammelsohn wandered sexually liberated Vienna more concerned that he had been married twice yet was still a virgin. Who better to swoop in like a superhero than ur-therapist Sigmund Freud? And so the duke of daddy issues unwittingly kick-starts Jakob's sex life and adds fuel to his friend's travels toward and beyond the turn of the century, leading to collisions with other historical figures, including Emma Eckstein, one of Freud's great failures; Esperanto inventor Ludovik Zamenhof; and Warsaw ghetto chronicler Rabbi Kalonymos Kalmish Szapira.

Jakob's unlucky streak in love starts to look more like a downward spiral not soon after the book's first act. Turns out these vicious cycles might originate with three bit players in the Torah traveling from life to life throughout time, cursed to curse one another. Or they might just be an elaborate hallucination brought on by Jakob's hysteria. Either way, Romantic's movement from the lower-middle class to the German mandated Polish slums is rife with supernatural sabotage and all-around shit luck.

Skibell doesn't paint a dour picture for all 600 pages. There are moments of joy, love, and, yes, long-delayed sex even as A Curable Romantic shifts gears from mystery to history to something approximating Dante's Paradiso with few snags in the author's skilled yarn-spinning. Skibell bends the English language to his will as he examines the power of language to alienate and unite. Jakob, however, can't shake his past. He admits, "It's a peculiarity of us Jews that we tend to drag our history along behind us." And with a possible heavenly edict to be reborn over and over, Jakob's past is weighty indeed. That weight can be felt in the novel's prose, as Skibell's protagonist adds years to his life and the heavens beckon, if somewhat prematurely. One can only hope that Jakob's next life will be more fruitful, but if history, heaven, or both have their way, it looks doubtful.

In addition to his Texas Book Festival appearance, Joseph Skibell reads at BookPeople on Nov. 4.

The Widower's Tale: A Novel
A funny and subtle portrait of a family negotiating continuing crises from National Book Award-winner Julia Glass 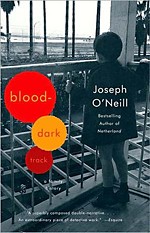