What's the story with Doug Dorst's 'The Surf Guru'? 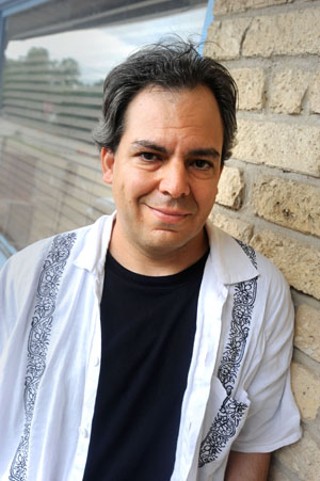 The title story in Doug Dorst's electric new collection, The Surf Guru (Riverhead Books), is about the CEO of a surfboard and accessories company who seems to ride in perpetuum that delicate balance between buzzed and blotto – gently soused, let's call it. Gulping Chianti on his oceanside back deck, the guru – placid, godlike – watches over the surfers who are literally branded by him, wearing his signature GOO-ROO surfwear. It's a funny, fragmented, semimystical short, rendered in tiny but exacting detail (the guru is a hat connoisseur: "he dons the biretta, the hat of wariness and watchfulness"). There's not another story like it in the collection.

In fact, no story is like any other story in The Surf Guru, Dorst's follow-up to his acclaimed 2008 underworld-noir novel, Alive in Necropolis. The fineness of the language, the specificity of the worlds created within, and the astonishing, deeply imaginative variedness of them are all that link the stories, which experiment with form, with subject, with tone, from the funny and spry "Splitters" (which Dorst calls a "love letter" to his botanist wife), a series of poison-pen biographical sketches written by a taxonomist with an axe to grind, to the dreamy but chilling "Jumping Jacks," a three-page memory piece linking a childhood firecracker fiasco to Bush Junior's Gulf War.

When I sit down for coffee in early July with Dorst, who's on summer hiatus from teaching creative writing at St. Edward's University, I mention that the book is, well, it's kind of violent. He seems taken aback. I tally off ravenous hyenas, a face bashed accidentally with a bat, the graphic slaughter of a rebel army, venomous snakes, shark attack, suicide by gunshot, and a single hack of a rusty sword. Dorst nods.

"And then there's the bottle-throwing in 'Vikings,'" he adds, "which is actually the one I'm most disturbed by, just because to me it's the most possibly real."

"Vikings" stars two sort-of-screwups, Phil and Trace, longtime friends on their way to Alaska, ostensibly to work. Their story, set around the Fourth of July, ends in a moment of shocking violence in a hotel room, when they turn on a third party, hurling beer bottles at his head. I ask Dorst why the scene bothers him so much.

"It's two characters for whom I feel some empathy doing something really terrible to somebody who doesn't deserve it. That really creeps me out."

"I felt terrible writing that. And all the way through that scene, I was wondering: 'Can I do this? Do I want to? Is it right to do this?' But I think that was a good experience. It's a scene that makes me really uncomfortable," he says.

"There are any number of writing teachers who will tell you that it's when you get to the stuff that makes you uncomfortable that you know you're writing the stuff that needs to be written. That's the story where I had my firsthand experience with that. I think it's good advice."

Where He's Coming From, Part I

When I ask Dorst about the genesis of individual stories, frequently he mentions real-life inspiration, like the soon-to-be-married couple whose cakemaker was stalking them (which grew into the collection's second story, "Dinaburg's Cake"). More than once, he mentions friends who are characters –you know, in the "he's a real character" sense –who then, with substantial finessing from the author, became characters in his stories. He mentions the hapless duo of "Vikings" again, Phil and Trace, who also appear in another story in the collection and are inspired by two of Dorst's friends from high school. He recalls the jumping-off point for "Vikings."

"I was in law school at the time; I was living in Palo Alto. They had been living in Durango, Colorado, and one morning, like, before dawn they showed up at my house with warrants for their arrests in several states.

"And they were like, 'Oh, Doug's in law school – he can tell us what to do about the court dates we might be blowing off.' And I did. I said, 'Um, go to your court date.' That was my legal expertise.

"I kinda felt, okay, let me work with that as a general sketch – two guys who I like, who are still capable of making pretty bad decisions, who generally mean well but it doesn't seem to work out."

I ask him how the real-life models for Phil and Trace feel about their fictional counterparts.

"Those two guys were totally into it," Dorst says. "In fact, sometimes I'd get phone calls where one of them was reporting to me more bad decisions, and I was like: 'Do not make your decision based on what will make you an interesting character. Please. I don't want that responsibility.'"

These are just a few of the plays with language Dorst uses in The Surf Guru, words so evocative they feel almost tactile. These are words that remind a person what a pleasure it can be to work your mouth around a language.

"I'm a total language geek," Dorst says. "I kind of like the idea that just because a word isn't a word doesn't mean you shouldn't use it.

"Maybe I just want the world to play by my rules."

Where He's Coming From, Part II

Other stories were sparked by other works of art, as in "Twelve Portraits of Dr. Gachet," an elegiac piece that imagines Vincent van Gogh's last days from the perspective of his doctor. Or in "La Fiesta de San Humberto el Menor," which was inspired by Alejandro Escovedo's song "Paradise."

"That story doesn't exist without that song. It's awesome," Dorst says.

I mention I've only heard the crummy 30-second preview on iTunes.

"You have to let it build. It's totally a journey song – I don't mean it's a Journey song."

"The jacket copy on both books touts this connection to T.C. Boyle [T. Coraghessan Boyle, the award-winning American novelist of The Road to Wellville, among others], which I feel a little sheepish about, because I really like T.C. Boyle, and if I met him, you know, I wouldn't want him to say, 'Oh, I hear you're the new me?' I'd be like, 'Please, I'm so sorry; I didn't write that.'"

Where He's Coming From, Part III

And sometimes a story starts at the most elemental place: with a word.

Dorst tries to recall the evolution of "Little Reptiles," a five-part minuet in scaled terror.

"I came across a quote ...," he stops himself, trying to remember.

"I got the title in my head, maybe.

"No, I fell in love with the word 'boomslang'" – it's a venomous, tree-dwelling snake, by the way – "and I wanted to write a story with the title 'Boomslang.' And the more I read about it, the more I sort of did that research-drift into other reptiles. And then I found the quote that the story begins with – St. Teresa of Ávila likening self-doubt to little reptiles biting you – and then that became the organizing principle for the story – that suite of anxieties with fun facts of reptiles mixed in.

"It's like one of the coolest things about being a writer is that whatever you get interested in, you can go check it out and make something out of it. It's like being a kid in school, where it's your job to learn stuff. It's really fun. And most grownup jobs don't let you do that." 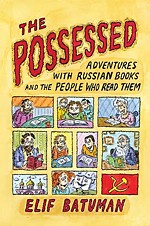 The Year in Books
'Freedom,' 'Finkler,' and the 'Kids' of America 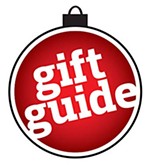 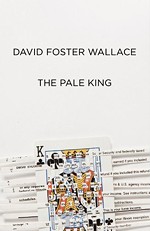