An original, humane, and deeply funny novella about a polar bear making it big in L.A. 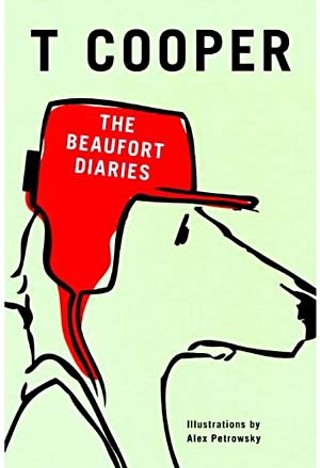 
T Cooper does the kind of thing that drives other writers mad: He takes the bones of stories told many times, in many ways, and shapes them into something singular and breathtaking. The Beaufort Diaries, his latest, might stake out new territory in some superficial way, but Cooper is still taking inspiration from some awfully common sources – climate change, Hollywood clichés, and the combination of the two – and shaping it into something few writers, or imaginations, could deliver.

Like his breakthrough novel, Lipshitz Six, or Two Angry Blondes, this slimmer, more whimsical volume is at heart an immigration story, one in which the dislocation is as much psychic as it is geographic. Named after the sea from which his mother launches him southward, Beaufort is a polar bear who makes his way to L.A., hustles as a busboy until Leonardo DiCaprio plucks him to co-star in eco-buddy pic Separation of Oil and State, and tumbles onward through the typical backwash of sudden public success. The work here is subtler than it sounds: In Beaufort, Cooper inhabits entirely the voice of an outsider who is both shrewd and sensitive. He can have his heart broken by the shallowest of supermodels or naively take a dip at a Hollywood pool party before being told no one actually swims at those; he can also relate deceptively sublime details that read as innocent discoveries and cut to the bone.

The Beaufort Diaries is being characterized as a "graphic novel," though in truth it's a novella with integral accompanying artwork that enhances its gentle absurdism. Alex Petroswky's drawings take advantage of a polar bear's natural look of befuddlement, which is easy to mistake for gentleness; in this case, Beaufort's deadpan observations manifest the ursine killer instincts underlying a hapless demeanor. At the same time, Petrowsky's use of the drawings in photo collages underlines the constancy of Beaufort's displacement and differentness. There also exists an animated short directed by Petrowsky and voiced by David Duchovny (www.t-cooper.com), but Cooper's nearly flawless prose is the meat of this work: It's as if the author challenged himself to test his talents with a scenario that in less able hands would almost necessarily lapse into cliché and cheap satire. Instead, Cooper makes it original, humane, and deeply funny.