What Would Owen Do?

Or, more to point, what can't comic, screenwriter, and now-novelist Owen Egerton do? He's like a walking full-color illustration for the term "hirsutorufous," and he might be the red-haired reincarnation of some naughty, freckled lemur. He lives among us – he has for years – and his name is Owen Egerton.

Owen Egerton – whom you may recall as one-third of the old Sinus Show at the Alamo Drafthouse? Or because he's done so much improv onstage with Les McGehee and National Comedy Theatre? Or because he's the star of so many wacky parenting videos from DadLabs? Or because Warner Bros. recently bought a screenplay he co-wrote? Or because he's had a couple of books published?

Well, he's got a new one: A novel. It's called The Book of Harold, the Illegitimate Son of God, it's due out this very week from local outfit Dalton Publishing, and we wouldn't be mentioning it if it didn't kick some serious ass.

Egerton's new novel is an irreverent, seriocomic roadtrip of mere anarchy loosed upon the world in the form of a computer salesman who becomes the messiah of an apocalyptically crumbling America. Egerton's new novel, trucking down the literary highway of modern suburban life, hums the catchy tune of radical action in ruinous times – hums it in the same key that Palahniuk's Fight Club hummed it, that Vonnegut's Cat's Cradle hummed it, that Irving's The World According to Garp hummed it.

Yeah, we know that's some pretty heavy company. Yeah, we think it's a legit comparison.

"I find that the different things I do – performing, screenwriting, novel writing – they all kind of bleed into each other, play off each other, and inspire each other," says Egerton, smiling. And this Book of Harold is the most recent inspiration?

"I worked on it, off and on, for 10 years – sometimes putting the book in a drawer and coming back to it months later. The working title for a long time was Jesus and the Cat-Killer." 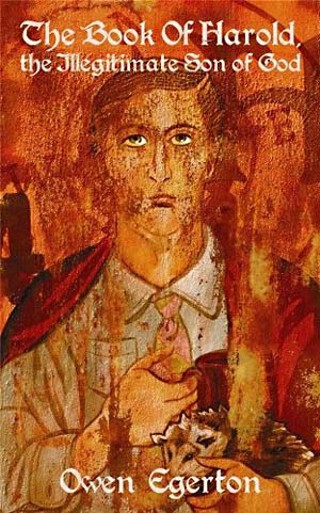 "Yeah, a lot of people had that reaction to it," says Egerton. "And I tried to tweak it, but people were like, 'No, just lose that title.' And, looking through the notebook I was using at the time, you can see that some of the original passages made it into the book, others were discarded, others were directions I could've gone. The story went through so many drafts and versions, different experiments of style, before finally landing where it is. I'm a huge believer in revising and crafting and editing, especially because, when I'm initially jumping into a story, the story carries me along more than I push it in any particular direction – and I find that a great mode for discovery. I'm a big believer that if I'm not discovering something when I'm writing, chances are that the reader won't be discovering something when they're reading."

And what sort of authorial discoveries were made in creating this novel?

"In some ways I think The Book of Harold was me as a writer, journeying from wherever else," says Egerton. "Because sometimes I want to write about suburbia, partly because of how much I dislike it. And as I was writing Harold, I realized that I was having my characters attack suburbia – and then they go on a pilgrimage to Austin. I was like, 'Hmmm, is this something I'm saying about my own personal voyage?'"

And, just to be certain, that voyage didn't also become the screenplay that sold, right? We're not going to see Blake Waterson and Beddy and the whole Haroldian uprising onscreen at the multiplex next week, are we?

"No, Harold's only a novel at this point. The screenplay was Bobbie Sue, which I wrote with Chris Mass and Russell Leigh Sharman, which Sandra Bullock is possibly doing."

So screenwriting is, like, a secondary sort of thing that Egerton just stumbled into?

"Well," he says, "when Chris and Russell and I first started working together, we found that we clicked in a really good way – we all had different things to offer, and there was a great synergy going on. So we wrote one script, and while that one was on the market, we started writing another one. And then we wrote another one, and it was that third one that initially sold to Warner Bros. And then things started rolling and we started getting rewrite gigs, and it's been kind of going from there. Writing screenplays has actually become my day job."

Good work, as they say, if one can get it – a definite measure of success. And how does a writer achieve such success, whether with novels or screenplays or what have you? Besides, of course, through hard work?

Egerton scratches at his rust-colored beard. "My friends and I were having a discussion about whether there's a responsibility for a writer," he says, "and I really believe there is. And I think this comes from my time onstage, from improv and comedy: I believe that a writer has the responsibility to entertain. Your readers, those people, are there – and they could be anywhere. And I've seen improv shows and performers and I've read books where the creators are so invested in what they're creating – which is valuable – but they're taking advantage of their audience. They're forgetting that those readers are giving their time, giving their energy.

"Think about it: You go into BookPeople and there's thousands of books. There's more books than you'll ever be able to read. You won't be able to get through the best of what's available in your lifetime. So I think there's something incredibly arrogant about saying, 'Here's another one, read my book,' instead of Hemingway or instead of Homer or whatever it is. So, if you're going to do that, at least make it entertaining, make it have a thrill to it. I'm a big believer in page-turners. There's something great about page-turners, because a book is competing against PlayStation and the Internet and, and, and everything. And, also, there's a big joy when you're so into a book that you want to turn the next page and stay in that world. I think that's essential."

So Egerton's got a page-turner here – and The Book of Harold is definitely that – but instead of it being, say, a spy novel about international political intrigue or a horror tale about some imminent vampire blitzkrieg, the narrative's MacGuffin is an attempt at understanding the fundamental meaning of existence. Sort of like ... Jason Bourne as Thomas Aquinas?

"One of the concepts in the novel," says Egerton, "is that we're always trying to put borders on the boundless. And that's so true when it comes to doctrine and dogma. Because there's this great mystery in the feelings that we can get from listening to music or looking at art or sometimes from just being alive. And there are so many stories, so many religious traditions that try to encompass that mystery, and of course they can't. They try to impose the idea that this scripture is the true word of God, or this person here is the one who is God Incarnate, or if you believe this then you know the truth – you know?" He frowns. "But that's like trying to grab smoke. And of course you can't; you can't grab smoke. You have to just go out into it and breathe it in."

Says author and media multitasker Owen Egerton, smiling like a lemur, breathing in the sweet springtime air of Austin, Texas, where (so far) there's nary a whiff of apocalypse on the breeze.

The book release party for The Book of Harold, the Illegitimate Son of God takes place Saturday, May 1, 7pm, at BookPeople, 603 N. Lamar.