But Is It Art?

Austin Kleon gets creative with poetry in his new collection, 'Newspaper Blackout'

Writer's block can make a man murderous. Austin Kleon's chosen weapon? A Sharpie. A few years back, while living in Cleveland, Kleon decided to vent his frustrations with writing by picking up a copy of The New York Times and slashing and burning with a marker. The remaining words, peeking out from a wash of black, had the look of a redacted document, but they read like a poem. "I didn't know what I was doing, or why," Kleon writes in the introduction to his new collection, called Newspaper Blackout (Harper Perennial). "All I knew was that it was fun to watch those words disappear behind that fat black marker line. It didn't feel like work; it felt like play."

That sense of play infuses the poems –short pieces that touch on first sex and outer space, in a voice that slips from funny to elegiac to freshman-year philosophic –but Kleon's creative spirit doesn't stop there. Now an Austin resident, Kleon is a Web designer by day; he's also a talented cartoonist (check out his work at www.austinkleon.com) and prolific blogger. It seems he's always in the act of creating – even if he's not sure just what it is he's creating, or why. The Chronicle recently spoke to Kleon by phone in advance of his book launch party at BookPeople on April 13.

The Austin Chronicle: I'm curious about the process itself. You don't read the original articles before you start blacking out words, right?

Austin Kleon: I do my best not to read them. I don't think "reading" would be a good word. I would say "scanning." I'm really trying my best to treat this newspaper as a blank canvas. Well, not necessarily a blank canvas – I like to say it's like one of those old word search puzzles that they used to have in activity books for kids, where you'd have a big field of letters and you're supposed to select the words that you're looking for on there. That's the metaphor I like to use for it. I like to look at it like there are all these words on this page, and I'm just looking for the ones that appeal to me.

AC: So you don't have a theme in mind?

AK: Oh, never. Never have a theme in mind. There's usually some anchor word in there or some phrase, or a combo of two words, and that's really when the poem starts. Until I have that anchor word, there is no poem, you know?

AC: You've referred to the process as "subtraction," but you could just as reasonably call it "destruction," right? Which is particularly poetic for anyone suffering from writer's block.

AK: Sure. Yeah, I think we all have destructive streaks in us. ... Someone brought up graffiti recently, and I said yeah, there's definitely an element of that, an element of the forbidden to it. Because it's something that like, if you were 5, and you picked up a marker and started scribbling on your parents' New York Times, you'd probably get scolded for it.

AC: Do you exclusively use The New York Times?

AK: I do, yeah. That's more a matter of I've been reading it for so many years, and I've always had a subscription, so there's always been a big pile of it. But more than that, the Times has really nice typography. The layout is always pretty great. And most of all, there are a lot of words in it. Which sounds really simplistic, but it's hard to find papers nowadays that have a lot of words in them that are good words.

AC: That is a sad statement on what's going on.

AC: That's interesting that something like the typeface attracts you. Does your design background inform how the poem looks on the page?

AK: Oh, absolutely. I pay very close attention to the layout of the words and how it reads. I'm a real big stickler on [wanting] to make sure it's easy to follow, the trail of the words, you know? So a lot of times that will influence the kind of poem I make. ... It's not just pure writing; it's design, too. 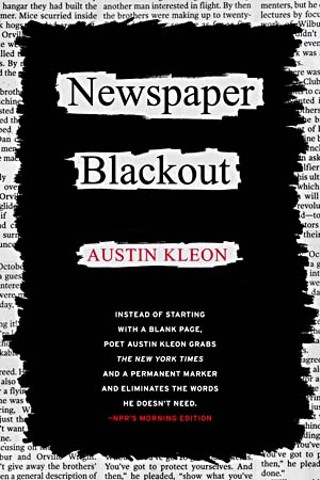 AK: We have this idea that writing comes out of your fingers on a keyboard, that that's the main way to write or whatever, but my whole idea is to bring writing back to using your hands, to using materials. Because in my life, the more I've used my hands as part of my writing process, the better my writing got, whether it was using a Sharpie with a newspaper or writing my words down on index cards and reshuffling them, cutups using scissors and glue, you know. And that's something that the more the computer is taking over our writing process, we lose that kind of tangible aspect to making things. And that's why I like the poems so much – you feel like you're making something.

AC: You're someone who has incorporated creativity into all aspects of your life – in your 9-to-5 work, in your drawings, in your blog, your poems. And then you end your book with a "how to" section. It seems like you really want to demystify the artistic process.

AK: I take so much inspiration from artists who are very transparent about their process, that show you: 'Look, I made this stuff. Here is how it happened.' Art isn't something you pull out of thin air. I mean, there's always the somewhat mystical element to the creative process. I don't know where any of my ideas are from; all I can tell you is the process I use to let those ideas come. My idea of a perfect world would be where everyone makes their own art, where they wouldn't need me. [laughs] Everyone would be making great stuff all the time. I might be out of a job, but it'd be a pretty great place.

The big influence on my thinking about that is a woman named Lynda Barry who's a cartoonist. I met her when I was still living in Cleveland, probably not too long after I started making the poems. She was so wonderfully open about her technique and how she writes. ... The structure of [Newspaper Blackout] is actually based on one of her books called One! Hundred! Demons!, where she used a Chinese brush to make all of her comics. She started out the book saying, "This is how I discovered the Chinese brush," and then the rest of the book was her actual comics, and then at the end there was a "how to" section. ... And I thought that was such a beautiful format, so I said, "Oh, I'm gonna totally rip that off."

AC: In your introduction, you include the names of other artists and writers who have done similar experiments with form and process, although you admit you didn't know about them when you first started the blackout poems.

AK: I'm really being honest in the introduction – when I first started, I knew about cutups, but I was really thinking about redacted government documents. [laughs] I thought I was ripping off the government. But what's fun about being online and about blogging is that you get educated by all your readers and all the people who come across your stuff. So I'd have people leave me comments like, "Oh, dude, this is totally like Tom Phillips" or "This is like Ronald Johnson – you should check this out," and I started amassing [information about] all these great people who'd come before. It was in some ways a defensive move on my part, because I didn't want people to think, "Oh, this kid thinks he's invented this." I wanted something to say, "No, I'm not the only person who's ever done this; here's the background, go check these people out." I [included] a reading list. And hopefully all those people will sell more books.

I think a lot of artists consider themselves to be magicians – they're like, "Oh, well, if I give away all my secrets, no one will come see me." Whereas I've found with artists, the more open they are about their processes, the more interesting I find them and the more I want to follow their work. So that's the approach I've taken with my fans and my followers, is just to let them in on the process as much as I can.

AC: What's the book launch at BookPeople going to be like?

AK: I'm really against reading the poems. I really don't think they need to be read aloud by me – I think people need to see them. I'm planning on doing like a little slide show, just kind of a quick, five-, 10-minute slide show about how I got started, and then I'm really hoping we can all make our own poems. I'm hoping that'll be a real interactive element. And I'll have Sharpies and papers and stuff so we can all just play and make stuff.

AC: So you're a Sharpie man?

AK: [laughs] I ... I am hesitant to claim any kind of corporate attachment. I have used Sharpies. I have used Marks-a-Lot. I use whatever's on sale.

AC: So you're not fishing for any endorsements.

AK: I would not mind an endorsement. I am not endorsed now.

AC: You're still a free agent.

All Your Memes Are Belong to Us: A Gallery
Austin meme weavers at work 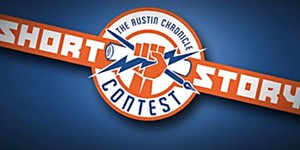