A Generation Gets to Talking 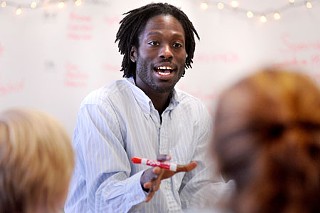 In a Clarksville house with clapboard siding and gently sloping hardwood floors, a few of the Austin Bat Cave's key players gather to talk. Twice a week, the house teems with young people, ages 6 to 18, who come for the free afterschool tutoring on Tuesdays and Thursdays. And year-round, kids congregate at the center for creative writing workshops – on topics as diverse as hip-hop poetry, songwriting, and newspaper reporting – taught by local creatives like Okkervil River frontman Will Sheff and Texas Monthly Editor-in-Chief Jake Silverstein. But on a gray day in mid-February, staff and volunteers are confabbing not about how to bring kids in to the Bat Cave, but about how to get the word out to them.

Call Roger Reeves a chief emissary. A poet and fellow at the University of Texas' Michener Center for Writers, Reeves is spearheading an effort at ABC to create a citywide anthology featuring writing from Austin's high schoolers. This winter, he's canvassed local schools, soliciting poems and short stories and conducting workshops. (Students can also submit online at www.austinbatcave.org.) As Reeves explains it, "We're going to put all these kids from all over the city together to think about, what are you guys saying individually and what are you saying collectively."

The theme of the debut anthology, to be published in May, is Reflections of a Generation. Reeves was inspired by a CNN article online that quizzed 10-year-olds on their impressions of the new millennium.

Austin Bat Cave Executive Director Courtney Robinson jumps in. "And hip-hop has always been around for them. Hip-hop to them is like any other genre – jazz or country or R&B. It's not new. So how do they feel about music?

"And we've been at war for a long, long time," she continues. "These kids – some of them were 7 and 8 when we went to war. Now they're in high school."

"And potentially could go to war themselves," Reeves points out.

Final selection of submissions to the anthology will come down to the discretion of Reeves and Houston-based writer Nick Flynn (Another Bullshit Night in Suck City: A Memoir). Austin Bat Cave co-founder S. Kirk Walsh explains Flynn's involvement.

"He taught in the New York City public schools for seven years and is just really behind this kind of work. He came here for a reading last year, and I kind of roped him in," she laughs. "He's very generous."

Flynn isn't alone in his enthusiasm for the program. Robinson praises the "humongous volunteer base," while Reeves points to the "really great energy" surrounding ABC, which was founded in 2005 and is an affiliate of 826, the now national literacy program that was started by Dave Eggers and others at a storefront on 826 Valencia in San Francisco.

This past year has seen the hiring of Robinson as ABC's new executive director, as well as more focused fundraising efforts for the nonprofit via the monthly Story Department events. Inspired by the Moth series in New York, the Story Department presents themed nights of live storytelling at various drinking holes around town ("those are for the grownups," Robinson says). The organization is also fast growing out of its current digs in West 11th. All told, it feels a little like the Bat Cave is at a moment on the brink.

"A year ago this time, we only had one foundation behind us, and now we have six," says Walsh. "They're not huge amounts, but we have some traction.

"We haven't quite hit the tipping point yet. But the citywide anthology is helping us to say [to the community], 'We're serious.' ... There's a lot of enthusiasm behind the Bat Cave, but the challenge is in galvanizing that enthusiasm. This kind of project is doing that – it's creating a container for that enthusiasm."

The Austin Bat Cave is now accepting submissions for the citywide anthology. For more information, including upcoming workshops and volunteer opportunities, visit www.austinbatcave.org.