Book Review: Something to Keep the Coffee Table Company 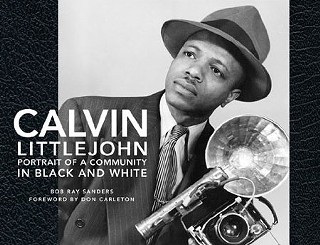 Calvin Littlejohn: Portrait of a Community in Black and White


When Calvin Littlejohn moved to Fort Worth, Texas, in 1934, it wasn't with the intention of righting a wrong. Born in Cotton Plant, Ark., the budding photographer hitched a ride with a family that had employed him as a domestic when jobs weren't forthcoming in Depression-era Arkansas. He had already learned the basics of photography, partly in response to racist depictions of African-Americans he saw around him: Upon being affronted by a billboard of a broadly grinning, buck-toothed black boy eating watermelon, he determined "to show the best side of these people that's being rejected so." He quickly got his chance in Fort Worth, photographing events at I.M. Terrell, the city's only black high school, and over the next 50 years or so became the de facto documentarian of Fort Worth's black community. Calvin Littlejohn: Portrait of a Community in Black and White is a testament to the photographer's tireless work and evolving vision – a visually incredible and intricate collective history in portraits and snapshots, commissioned events and candids of legendary entertainers (Ruth Brown, T-Bone Walker), athletes (Jackie Brown, Joe Louis), and political figures. The shot of Jesse Jackson in 1980, cutting up in Saturday Night Fever three-piece, cowboy hat, and porn stache, alone is worth the cover price, but Littlejohn is more than a hoot: It's a lively, loving document that shoots past the photographer's initial, redemptive goal to create a narrative of tiny nuances and tectonic shifts in a community fully alive and constantly changing.