Atwood's latest is a remarkable parable of a world ruined by corporate tyranny, reckless technology, casual violence, and utter disdain for the natural order The Year of the Flood: A Novel


"Since I didn't know what happened next, the only way to find out what happened next was to write another one." That's what Margaret Atwood says of the genesis of her latest novel, The Year of the Flood, her companion to Oryx and Crake (2004). The celebrated Canadian writer – "queen of CanLit," they anoint her there – calls the book a "simultaneal," as it renarrates the same near-future dystopian era from perspectives different from O&C's protagonist, Jimmy the Snowman. The central figures here are Toby, a working-class server in a SecretBurger franchise who becomes a reluctant Eve in a millennial cult – God's Gardeners – and Ren, daughter of a corporate scientist who lands with the Gardeners before drifting to Scales and Tails, a fantasy sex club.

Although familiar figures like Jimmy (and Crake and the Texas-drought fugitive Amanda Payne) pass through Flood, it is primarily through Toby and Ren that Atwood recounts her remarkable parable of a world ruined by corporate tyranny, reckless technology, casual violence, and utter disdain for the natural order. Looming throughout is what the Gardeners anticipate as "the Waterless Flood" – a man-made plague with its roots in vainglorious genetic manipulation, as practiced by the dictatorial Corporation Security Corps ("CorpSeCorps"), its international enemies, and various crooks, rebels, and warring fringe groups, of which the Gardeners are the most benign. DIY ecologists, pantheists, and conspirators, they are precariously trying to sustain what's left of the natural world and ordinary history.

But Atwood, although she might be described honorably as an eco-feminist, is no sentimentalist. The Gardeners are often barely coherent, schismatic, even laughable, and her heroines are complex and flawed people uncertain how to live in a shattered culture. "As for writing," reflects Ren, "it was dangerous ... because your enemies could trace you through it, and hunt you down, and use your words to condemn you." Frank words from a clear-eyed novelist.

Atwood will appear at the Texas Book Festival, perhaps offering a taste of the Flood-performances she's organized elsewhere on the tour, now being filmed as The Margaret Atwood Project by Toronto documentarian Ron Mann. She turns 70 next month and tentatively plans a third Flood novel – if nature and the gods allow. 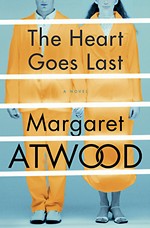