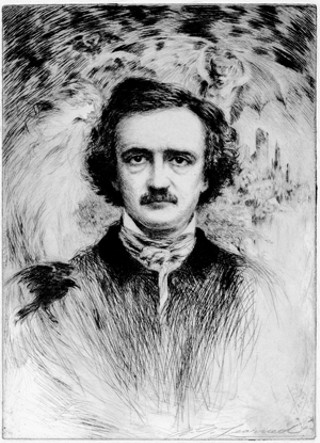 The man was a literary wonder: That's why we know about him today, 200 years after his birth; that's why we give a damn.

He was also an alcoholic and frequently unemployed loser who stumbled from dive bar to dive bar and went through women the way Ebola goes through a human body. It's fitting that this Austin exhibition of documents and objects, a collaborative presentation from the University of Texas' Harry Ransom Center and the University of Virginia, is centered on a man whose personal life resembled that of any number of local musicians over the years. Bass players, say. Or visual artists, for that matter. Theatre people. Indie filmmakers. Writers. What they call creatives.

Thus can we relate to the author as well as be regaled by his work, even if we're now friends of Bill and onto the yoga and salad greens and such. Even if we're not homeless or about to die of tuberculosis or syphilis or cholera or extreme delirium tremens or whatever it was – no one knows for sure – that killed Mrs. Poe's wayward son.

Such relating and regaling is the purpose of "From Out That Shadow: The Life and Legacy of Edgar Allan Poe," this comprehensive show concerned with the Boston native who no less a contemporary than Ralph Waldo Emerson derided as "the jingle man." (Oh really, Ralph? And who, outside the hollow grooves of academe, recalls a single thing that you ever wrote – except for one quotation available on that popular refrigerator magnet? And those aren't even your words, are they, about how one succeeds, about the measure of one's success? The bit's a misattribution that denies credit to its true creator, the poet Bessie Stanley. Boo-ya, you godless transcendentalist, you.)

"'From Out That Shadow' is unusual in taking a topical and contextual approach to Poe's life and work," confirms the exhibition's co-curator Richard Oram. That's largely due to the continued interest in the author, the way his influence is still felt throughout pop culture in these Internetted times. "When you look at 19th century literature," says Oram, "it's really only Poe and Melville and, off to one side, Emily Dickinson who still resonate with our times."

"One of the things that's unusual about Poe," says co-curator Molly Schwartzburg, "is that almost everybody has read him – because you read Poe in school. A lot of the school canon changes dramatically over generations. There are books that I read in high school that students here at UT, current undergrads, have never heard of. But everyone's familiar with Poe; everyone has a sense of ownership with Poe. He's a constant."

Indeed, he is a constant, and the only variable in the golden and buggy equation is which form his creations will take next. One of the objects on display in the Ransom Center's many vitrines is a small, mass-marketed plastic model from The Simpsons' "Treehouse of Horror" Halloween special – the episode in which Simpsons characters acted out "The Raven" as it was intoned in sonorous voiceover. "The animation was funny," says Schwartzburg, "but the reading itself wasn't a parody at all: James Earl Jones read the whole poem word for word." And there's a copy of the Marvel comic version of Poe's "The Pit and the Pendulum," posters from the Roger Corman-helmed series of Poe-inspired movies starring Vincent Price (some of which will be screened over the course of this exhibition), a logo for the Baltimore Ravens football team, and all manner of modern ephemera providing evidence of the macabre wordsmith's continuing influence.

But the shadow that Poe casts stretches a long way back, the parameters of its darkness defined by many and diverse documents: the original manuscript, for instance, of "The Raven"; the first edition of his first book, Tamerlane and other Poems, of which only 50 copies were produced; an appreciative, handwritten review (by Walt Whitman!) of the man's work; and a letter in which the author pretty much wrenches out his wounded, gin-soaked heart and smears it across the paper via his always meticulous handwriting.

"Poe didn't reveal himself a lot in his letters," says Oram, "but this one is really revealing. He writes about the death of his wife, Virginia Clemm, the year before. She died of consumption –" Oram smiles " – a 19th century literary disease. He married her when she was 13, a marriage between cousins. Poe's relationships with women tended to follow the pattern of him idealizing them, and then the relationship would reach a certain point, and either the woman would break it off – because she realized she had a project on her hands – or he'd break it off, because, pure speculation, he wasn't emotionally able to handle a real relationship."

There's also a record of Poe's library fines from the University of Virginia, a brooch containing the author's hair, several yellowed newspaper clippings ...

What are we to do here, though? Merely provide a series of lists of what's available for your perusal in this Poe show? Better we should urge you to experience what it's like to stand so near to dear, fucked-up Edgar's personal writing desk. It's there in the Harry Ransom Center: the very desk he used while toiling at The Southern Literary Messenger. Imagine the man scribbling away through the throbbing miasma of another hangover, crafting his critiques and reports from the dark side of human imagination, perhaps answering the letters – letters of praise, of condemnation, of dire purpose – shoved hastily into the recesses of the desk's tidy shelves. Watch him unloading page after page upon the stained blotter, concentrating to control the nib of his pen, pausing to run a trembling hand through the limp black strands of his yet-unbrooched hair. If you can't smell the genius wafting from the man's uneasy corpus, you can smell the alcohol: Poe was fired from the Messenger, of course, due to repeated ... insobriety.

"He clearly had serious problems," says Oram. "He couldn't tolerate alcohol well, and he self-medicated a lot, partly for depression. He had a difficult financial life, and there were always two things he was always looking for – either a government post or an editorship of a stable magazine, and he never succeeded, really, with either goal."

But he did succeed in one goal: escaping, if only abstractly, death. Poe's work is often concerned with the (frequently violent) end of life, especially as the result of being accidentally or intentionally buried alive. At the Harry Ransom Center, much of what was buried within and beyond the writing has been exhumed from the past's tenacious coffin and laid out for all to see, and, in seeing, comprehending, reanimating. Document after document, story after story – what is called, after all, a body of work. ("Everybody is a book of blood," as the modern horror writer Clive Barker puts it, "wherever we're opened, we're red.") And the narratives themselves can come alive not only through your reading them, whenever you do, but via illustrations like those so lovingly arranged on the center's paper-white walls: the originals of Arthur Rackham's drawings and paintings for Poe's Tales of Mystery & Imagination, the engravings of Gustave Doré, the gorgeous mood-pieces by Edmund Dulac, and many others.

In word and image, in cartoon and motion picture, in the minds of so many across this ultimately indecipherable world, what was most compelling about Edgar Allan Poe still lives, still affects us with its myriad darkling charms reaching, ever reaching, from out that shadow.

"From Out That Shadow: The Life and Legacy of Edgar Allan Poe" runs Sept. 8 through Jan. 3 at the Harry Ransom Center. For more info, visit www.hrc.utexas.edu.

Passion Project
Fantastic Fest and its home base, the Alamo Drafthouse, have only gotten bigger, but its heart – pure and pulpy – stays the same