This graphic novel depicts a time and a place where bravery borders on stupidity, obligation becomes an albatross, and thugs step up to the mantle as heroes 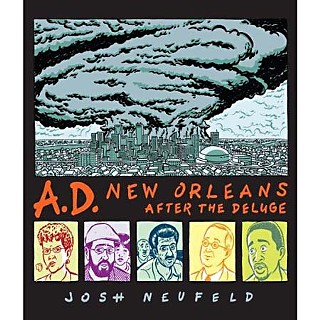 A.D.: New Orleans After the Deluge


Best known for his work with Harvey Pekar on the legendary collaborative comic American Splendor and inspired by his own stint as a relief worker along the Mississippi Gulf Coast, graphic novelist Josh Neufeld tackles the epic of Hurricane Katrina through the eyes of seven witnesses – pastor's son Kwame, shop owner Abbas and his fishing buddy Darnell, indie zine/comic kids Leo and Michelle, genteel French Quarter doctor Brobson, and whip-smart, cynical social worker Denise. A.D. began in serial webisode form, housed on the storytelling website Smith Magazine (www.smithmag.net). The online versions of the stories come together with added credence and gravity through the glue of bound narrative. Utilizing different color palettes in each section to demark the passing of days, Neufeld chooses stark duotone to deliver the blows of Katrina's trauma. The effect merges the tenderness of a home movie with the authority of an old film reel. His lines are clean yet soft, a Hernandez Bros.-ian quality that flows throughout his art, lending warmth and subtlety to stories that deserve some while managing to transform memory banks into important documents and testimonies. Simmering in a roux of nuance and avoiding the graphic tendencies of the genre (no mean feat, especially considering the violent terror of the subject matter at hand), Neufeld captures the quiet dignity and resolve of these survivors as they muddle through nature's recent "Take that, bitch!" and the Bush admin's most arrogant "Fuck you" this side of Iraq. On occasion, Neufeld employs some crazy bird's- (or perhaps, God's-) eye view, depicting his subjects surrounded by water, by their personal effects, by suffering humanity – an all-knowing and -seeing eye, perhaps implying that through this hell, they are not alone ... or that ultimately, they are. Either way, he captures darkness, outside and within the heart, at the moment the hollow howls of fear dissolve, when there's nothing left to do but breach the unknown and keep moving. Most importantly, however, Neufeld nails NOLA: Characters in UNO shirts, "Where y'at!," Claiborne, and Galatoire's all come alive as the world turns on its head – where bravery borders on stupidity, obligation becomes an albatross, and thugs step up to the mantle as heroes.