With dust-dry wit, James Hannaham charts a Homeric course for his protagonist through a sham marriage, an identity change, Atlanta's gay underground, an extended pray-away-the-gay program, and more 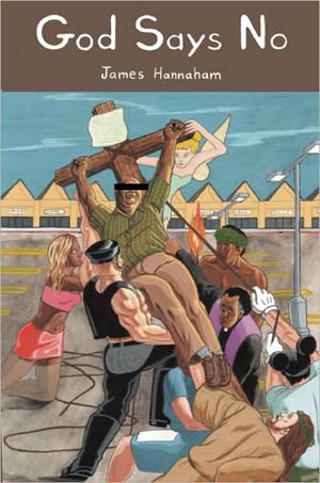 
The Florida tourism bureau could hardly ask for a better testimonial than the epiphany experienced by the perfectly named Gary Gray, God Says No's protagonist, as he returns from exile to his home state. "No wonder old people go here to die," he allows. "Going to Heaven from Florida, you wouldn't notice the change. I spotted palm trees as the aircraft flew down, then I saw Disney World just before landing and thought, I am returning to paradise. Not even Adam and Eve got to do that." Gary may be gay, African-American, and fat (poundage undisclosed), but he is not a man who wants to live in the margins. He believes in Disney World and Jesus with equal fervor, and he very much wants to be part of the America for which the Sunshine State is a Technicolor stand-in: upstanding, religious, family-oriented, milquetoast, and middling; he wants to live in the straight world, in every sense. His journey – one could call it Homeric, if one were taking clues from the mast-tying crucifixion depicted on the cover – takes him from Christian college through a sham marriage, fatherhood, a literal identity change, Atlanta's gay underground, an extended pray-away-the-gay program, and back to a transformed home that is ill-fitting yet comforting. Sheltered and underwhelmed, Gary seems both perplexed and halfway apathetic about the absurd trajectory of his life. It is the impressive discipline of first-time novelist (and Michner graduate) James Hannaham's flat prose – which displays an almost anti-writerly lack of ornament, devoid of extensive contemplation – that allows such a thorough inhabitation of his character. We are drawn along Gary's path by dint of his story and the dust-dry wit that sneaks through his seemingly two-dimensional narration. Neither Gary nor his also nicely monikered Atlantan alter ego, August Valentine, participates overly in what is commonly called the gay community (or, for that matter, in the African-American community); the main difference between the two is that Gary seeks only illicit, anonymous, shame-laden sex in quasi-public places, and the out-but-not-particularly-proud Valentine enjoys cohabitation, steady lovers, and some of the more superficial clichés of gay life (theatre, gastronomy). There is no outsider salvation here, merely the small, funny tribulations of an American life. Going Underground
The year in books