The Great Perhaps: A Novel

Middle age sets in for the former Punk Planet contributor in this, his fifth novel 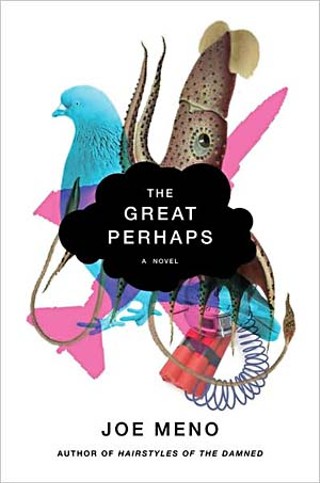 The Great Perhaps: A Novel


Chicago writer Joe Meno, former Punk Planet contributor and author of 2004's semiautobiographical coming-of-age phenom Hairstyles of the Damned, keeps his beloved hometown the setting of his fifth novel. However, maturity has set in: Gone are his awkward punk rock teens, replaced with the awkward Hyde Park-dwelling Casper family. Jonathan is a paleontologist obsessed with finding the elusive Tusoteuthis longa species of squid; his wife, Madeline, is an animal behaviorist befuddled by murdering pigeons. Both are frustrated with the nonanswers of their work and are trying to keep their marriage's unraveling from their daughters, 17-year-old Amelia, an opinionated, beret-wearing Marxist, and 14-year-old Thisbe, sensitive and looking for God. Add to that the bizarre medical condition that makes Jonathan seize up at the sight of anything resembling a cloud and his ailing father Henry's desire to remove himself from life by speaking less and less each day, and the collection of neuroses and inadequacies feels a lot like one of Wes Anderson's sad, quirky tales. But Meno never gets around to really stretching the characters' dissatisfaction into a streamlined narrative where their search for answers yields anything particularly revelatory. Rather, he just catalogs their failures and random eccentricities. Madeline spends the time she's not in the lab following a mysterious cloud figure around town, but the explanation as to why is cryptic and dense. Jonathan stumbles around in his own self-centered haze, distracted more by his haughty French nemesis than any of the angst Ahab felt. His daughters, left alone for much of the book, escape their home life by building bombs and praying. Intermittent chapters detailing Henry's family history and participation in World War II lend little in the way of insight, and while the story, set in late 2004, makes brief mentions of the Iraq war and the looming Bush/Kerry election, there's little else to give the story context. Ultimately, we have five characters whose nuclear center has been cleaved open, but the ensuing nervous breakdowns are pretty shrug-worthy. It's an ambitious, layered novel, but we don't necessarily feel sympathy for them, their search for answers as intangible as the clouds that surround them.

Joe Meno, Punk Planet, Hairstyles of the Damned, The Great Perhaps: A Novel