The Insider's Outsider Guide to Texas 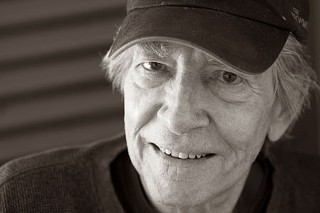 There are some writers whose obituaries make you wonder how they ever got any writing done. Truman Capote's fans, for example, know just as much about his famous Black and White Ball as they do about Breakfast at Tiffany's or In Cold Blood. When Joyce Carol Oates dies, no one will be talking about who she did or did not invite to the parties she gave; they'll be talking about the incredible pace of her publishing and the books she wrote. That doesn't necessarily mean she's a better writer than Capote.

It's difficult to talk about Edwin "Bud" Shrake, who died on May 8 at the age of 77, without mentioning the Mad Dogs, a group of rebellious writers and musicians, including Dennis Hopper, Willie Nelson, Jerry Jeff Walker, and Ann Richards, who raised a lot of hell in Austin in the late Sixties and early Seventies. Even though Shrake's writing is much more daring, idiosyncratic, clear, and imaginative than his coked-up Mad Dog days would suggest he had the inclination, or the time, to achieve, it was a period of feverish creativity for Shrake, when he produced some of the most memorable writing about this state – both fiction and journalism – that has ever been published. Shrake may have been a hellraiser of the first order, but he was also a dedicated novelist and an observant, scrupulous journalist. He once told me that whenever he interviewed someone, he took notes and used a tape recorder. According to an article Shrake's friend and Texas Monthly journalist Gary Cartwright wrote in the April 2000 issue of that magazine, Shrake placed this quote in his office: "The difference between the right word and almost the right word is the difference between the lightning and the lightning-bug – Mark Twain."

Susan Sontag once observed that "a writer is someone who is interested in everything"; Shrake perfectly fits that description, with more than 10 novels to his name, not to mention his sportswriting, journalism, screenplays, and plays. In 1992, Shrake published Harvey Penick's Little Red Book, a book of insights from Penick, the former golf master at the Austin Country Club; that book and the subsequent Penick books have sold more than 3 million copies, making Shrake the bestselling sportswriter in all of American publishing history.

But it's Shrake's other work that deserves more attention. His raucous novel Strange Peaches (1972) is set in Dallas during the Kennedy assassination, when Shrake and Cartwright were both sportswriters and shared an apartment north of downtown Dallas that was a stopping place for some of the city's scruffier legends, including Jack Ruby and his famous stripper, Jada. Strange Peaches may be the first Texas novel to ever really poke fun at the state, at least in a more caustic way than Larry McMurtry did in 1966 with The Last Picture Show. Shrake said that Strange Peaches is "mostly all true." It contains the following passage: "The telephone woke me up. It was Dorothy saying I had to come over there quick, her mother was dead. I didn't know if I had really been asleep, because I was still dressed in my Brooks Brothers suit. My legs ached, and I seemed to be having a speed flash with sweating and palpitations. I said I would be there and hung up and tried to read my watch. It would not make sense."

Shrake knew Texas intimately, but he viewed it as an outsider, which made his writing about it more evocative. He was one of the star writers Willie Morris used when he was editor of Harper's, in that magazine's glory days in the late Sixties. One of the articles Shrake wrote for Morris is called "The Land of the Permanent Wave," and it describes what happens when a moderately long-haired writer (Shrake) goes to East Texas during the Vietnam War to write about the ecological destruction of the Big Thicket: He gets blackballed as a Communist. The police tailed him wherever he went, the hotel made him pay for his room in advance, and the hotel's restaurant made him pay in advance. So in classic Shrake style, he did two things to one-up the suspicious East Texans: He first suggested that pre-emptively bombing all of North and South Vietnam would be a really good idea. "You can't give a Communist a damn inch, Arch. You know that," he said. That made them think for a minute, then agree with him. Then one day, he remembered that he had a "battered, well-crushed" cowboy hat in the trunk of his car. He put it on. "As I turned back toward the coffee shop," Shrake writes, "there stood the cop. His mean face slowly resolved into a baffled, respectful expression, like that of a weasel facing a trap."

"Shrake is one of those rare Texas writers who describes his home state in the manner of a national writer, rather than a regional one," Steven L. Davis, the editor of Land of the Permanent Wave: An Edwin "Bud" Shrake Reader (published in 2008 by the University of Texas Press), writes in the book's introduction. "His prose strides confidently through the pages, comically subversive, yet with a heightened regard for the abundant mysteries of human nature. In matters of style, Shrake has less in common with his Texas contemporaries than with other American novelists such as Ken Kesey, Walker Percy, and Kurt Vonnegut."

Shrake may have later winced about his hard-living days, but he had a large and generous soul that allowed him to laugh about a period in his life others who lived through it might have attempted to repress.

It's been mentioned in at least one obituary about Shrake that one of his final literary events, his session at the 2008 Texas Book Festival for Land of the Permanent Wave, was packed, which is no surprise – readers liked Shrake because he was a good writer but also because he generated a lot of goodwill. But there was also a moment during a 2007 festival panel that revealed a lot about Shrake. That year, he published Custer's Brother's Horse, a fast-paced Western set in Austin at the end of the Civil War. That year, we put Shrake on a panel of four writers called Getting Even: The Literature of Revenge; we also put the young writer Shalom Auslander, whose Foreskin's Lament: A Memoir, is about growing up in an Orthodox Jewish family. Auslander later became estranged from his family and describes in the book what it's like feeling the wrath of God – in fact, what it's like being hounded by God. During the panel, Auslander was describing his plight. "Do you really think God wants to get revenge on you?" Shrake blurted out, bemused that God would be such a vindictive deity as to single out one man alone, a man who happened to be on the same panel with him.

It's dangerous to quote a writer's fiction and assume it is also autobiography, but there are some lines in Shrake's 1968 novel, Blessed McGill, that are relevant here: "Since I was a boy I have hit, shot, stomped, got drunk with, spraddled or even loved most everybody who appeared in my path and many that I had to chase," Shrake writes. "I have seen that there is unity in all things, and as a result I do not so much mind dying."

Clay Smith is the literary director of the Texas Book Festival and a former Chronicle Books editor. 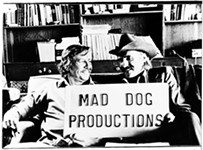 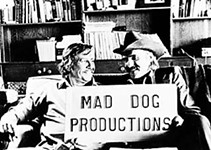 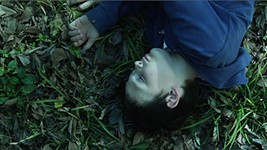