An Oresteia: Agamemnon by Aiskhylos; Elektra by Sophokles; Orestes by Euripides

Call it anti-canon: This terrific new translation goes the distance from breathless to brutish to keening 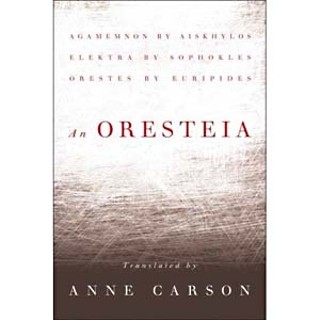 An Oresteia: Agamemnon by Aiskhylos; Elektra by Sophokles; Orestes by Euripides


The article in the title is telling: This is not the Oresteia, the Aeschylus trilogy of plays that detail domino murders in the House of Atreus, a family "glued to ruin." Instead, translator Anne Carson crafts a new revenge cycle by plucking each leg from a different Greek tragedian. Aeschylus' Agamemnon recounts the titular king's murder, along with that of his war prize, the tragic soothsayer Cassandra, at the hand of his wife, the queen Clytemnestra (revenge for Agamemnon's religious sacrifice of their daughter, Iphigenia); Sophocles' Electra concerns itself with the maneuvering of the title's grief-stricken spinster daughter to seek justice for her father (she convinces her banished brother, Orestes, to kill Mom); and Euripedes' Orestes follows the public trial against the half-mad Orestes and his own harebrained scheming to avoid execution (spoiler alert: it involves more bloodletting).

In her introduction to the book, Carson promises a "non-foundational" Oresteia and later references spiritual simpaticos such as John Cage, Stevie Nicks, W.H. Auden, and the painter Francis Bacon – sure signs we've entered uncharted waters. Carson stays tonally true to the plays – Aeschylus' Cassandra monologue continues to chill to the bone; Orestes still bears a surreal, black comic bite (when asked who's clamoring for his head, Orestes cracks back, "Long story short, the whole citizen body") – but she takes some exhilarating liberties with the language, tightening and contemporizing the text. Only very rarely does the modernization distract; when Helen of Troy is referred to as a "weapon of mass destruction," the allusion feels too clever by half. (Far more successful – and teeth-baring – is another stab at poor Helen, "that venge-kitty poison-pretty whore.") Carson doesn't mince words, to the book's great benefit, and her ear for rhythm and cadence easily goes the distance from breathless to brutish to keening.

Above all, An Oresteia begs to be read aloud. Earlier this month, New York's Classic Stage Company debuted the trilogy to good reviews; Carson credits the company's artistic director, Brian Kulick, with the idea for the project. While Carson has certainly stripped the plays of any classical hoity-toity-ness, their humor – as in Elektra's mother/daughter sniping – becomes even more apparent when spoken aloud. The decision to have the characters' many moans and shrieks set down onomatopoeically ("OIMOI TALAIN," for instance) marks the book's only real ungainliness – how exactly is one supposed to work one's mouth around that? – but it's a minor irritant when put next to the translation's otherwise-irresistible musicality.