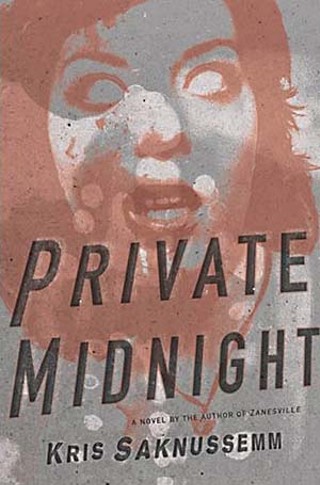 
How many books are there with a sleazy cop finding some kind of redemption after a redheaded femme fatale walks into his life? In Private Midnight, Birch Ritter is the cop whose self-admitted crimes leave the opening pages soaked in blood and the sweat of illicit sex. Genevieve is the mysterious woman who leaves a trail of suicidal associates behind her. Ritter starts investigating her – an investigation to which she submits willingly. What he unknowingly signs on for is a therapy session with the devil, and there's always that pesky price to pay.

Ritter's internal monologue starts off sounding like a cop written by someone who knows law enforcement only from reading high-end and pulp detective fiction. When it works, it's witty, culturally rich, and brutal in a seedy way. When it fails, it's like Damon Runyon, James Ellroy, and Dennis Miller dukin' it out for keyboard ownership. But as Ritter changes (or, more accurately, undergoes his own Metamorphosis, courtesy of Genevieve), the book melds the mystic/mythic exploration of The Golden Bough and the easy eroticism of those early porn novels Anne Rice used to put out under a pseudonym. Only, you know, addictively readable. As Ritter transforms from irredeemable gumshoe to something stranger and more willingly perverse, so does his narrative voice become clearer and starker, and the events become weirder, more sordid, and shamanistic.

Private Midnight courts controversy, but that's almost undoubtedly Saknussemm's intention. As Genevieve strips Ritter down physically and spiritually, Saknussemm cracks open a series of modern shibboleths about sexuality and justice and invites the audience to feast on its guts. It's impossible to say whether individual readers will be entranced, appalled, or disgusted by his work. But if this book is Saknussemm's sophomore misfire, then it is at bare minimum bold, intriguing, and disturbing.