Being a writer is one of a very select group of occupations that no one ever truly retires from. Even Stephen King, who announced his intention to withdraw from the scribbler's fold in 2002 so that he "could finish up like Harold Robbins," has, in the interim, positively devoured his words and regurgitated them back into the booksellers in novel, anthology, nonfiction, and graphic-novel form. Ray Bradbury, 27 years King's senior at 88 years old (or young, as he frequently notes), has become, if anything, even more prolific than his reigning literary offspring. Since suffering a massive stroke in 1999, America's literary treasure has produced a steady stream of new story collections and novels, the best of which, 2001's From the Dust Returned, was an unexpected sequel to what is arguably his best-loved piece of short fiction, "Homecoming." We'll Always Have Paris collects 21 previously unpublished short stories and one poem ("America") that are unmistakably Bradbury. Long ago released from the sci-fi and "dark fantasy" literary subghettos, Bradbury's prose has become both leaner and keener over the years without sacrificing any of his trademark humanist whimsy. Some of the stories here are reminiscent of Raymond Carver's stripped-down and edgily blunt brand of emotional fireworks ("Un-Pillow Talk"), while pieces such as the dialogue-rich title story have the literary solidity and self-awareness of Hemingway. For better or worse, however, it's Bradbury's meditations on Mars and men and the primal, atavistic interactions of one upon the other that won him first fame. That sublime obsession with the Angry Red Planet-as-metaphor reappears here in the excellent "Fly Away Home." Other Bradbury themes – fey phantoms, Gabriel García Márquez-esque magic realism, meditations on murder and music – return in new guises, still pulsing with the human heart and soul of their varied precursors. It's reassuring and immensely satisfying to discover, once again, that Bradbury has no intention or inkling of setting aside his pen – his sword, our shield – and has lost none of his unique power to make you think not with your head but with your heart. Bradury's lyrical prose still radiates off the page and into the soul. In days like these, that's nothing short of a medicine for melancholy. 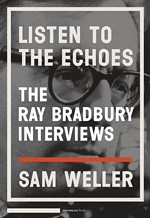 Listen to the Echoes: The Ray Bradbury Interviews
As important a book in its own way as François Truffaut's Hitchcock, Listen to the Echoes compiles dozens of hours of interviews Bradbury's biographer has conducted over the past several decades