The Big Rich: The Rise and Fall of the Greatest Texas Oil Fortunes 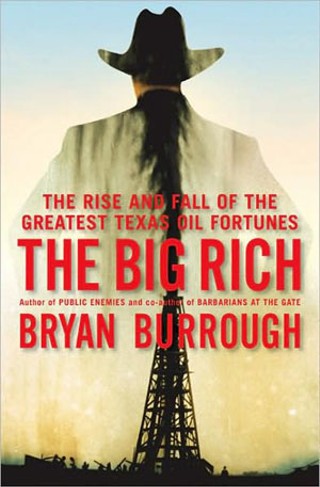 The Big Rich: The Rise and Fall of the Greatest Texas Oil Fortunes


"Texas," barbs veteran journalist and author Bryan Burrough in his most recent book-length effort, "has always been the butt of jokes." This is, I believe, something of a misstatement – a personal redirection (Burrough grew up in Temple, Texas) of the inferiority complex shared by so many other residents of states that share in the distinct trouble that comes with being of the U.S. and not of its urban Northeast.

But that's not exactly the brand of armchair psychology that we'll get into here. Nah: What matters more, or should – at least to Burrough and to anyone who might want to pick up a copy of The Big Rich – is the fact that this perception continues to exist and, in so doing, continues to fuel Texans' needs to live up to the size of the mass of land that exists between the Red and Rio Grande rivers.

Nowhere is this sort of overcompensation more evident than in the actions of various members of the four families who make up the frame for Burrough's latest. The Hunt, Richardson/Bass, Murchison, and Cullen clans all found wealth on an unprecedented scale when their respective patriarchs wildcatted their ways into major oil finds. Then, suddenly blessed with that which they'd never before had (and itching, no doubt, to prove that they were worth it), H.L. Hunt, Sid Richardson, Clint Murchison, and Roy Cullen promptly began to spend. On multiple secret families. On private islands. On radical politics. On future presidents. The best part? Everything might have been fine and dandy had three-quarters of their collective brood not proven to be complete and total fucktards. (Really, Nelson Bunker Hunt? You had to have all of the silver in the world? Really?)

That this stuff makes for an easy page-turner comes as nothing of a surprise. Nor does the fact that Burrough – whose past credits include a co-author turn for Barbarians at the Gate (about the leveraged buyout of RJR Nabisco) and who is still a Vanity Fair special correspondent – did a pretty good job researching the thing and making it into a cohesive narrative. Indeed, the only thing that seems to be missing from Burrough's book is a stab at lay psychoanalysis.

And that's not exactly a terrible loss.