"He who owns the oil will own the world ...": Barry Unsworth's latest is a finely drawn novel set in 1914 Mesopotamia 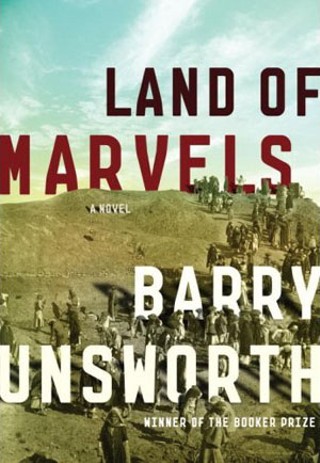 Land of Marvels: A Novel


"He who owns the oil will own the world, he will rule the sea and the land, he will rule his fellowman ... the day will come when oil will be more desired, more sought after than gold." The 100-year reign of oil may now be slowly coming to an end with the birth of green technologies, but back in 1914 Mesopotamia, the prescient appetite for oil, in lieu of coal, was just beginning to be fully realized. It's in this historically rich locale, at this politically volatile time, that Booker Prize-winning author Barry Unsworth sets his novel, the relevance of which is uncanny for obvious reasons. The story is told through a cast of international characters, all with different operational motives. Somerville is a British archeologist searching for an ancient Assyrian palace but worried that a Baghdad-bound railroad being built by the Germans will come right through his site. Jehar is an ambitious, if possibly unscrupulous, Mesopotamian working for Somerville and motivated by his desire to amass a dowry. Elliott is an American geologist posing as an archeologist sent to the region by an oil company to explore for possible drilling sites. Most interesting is Lord Rampling, quick to espouse platitudes boasting of Britain's international benevolence, who from afar exerts the most influence, wheeling and dealing with government officials, international bankers, and private global financial concerns, à la today's Carlyle Group. A host of minor players also adds to the intrigue. The discovery of oil ultimately plays out in dramatically different and unexpected ways for those involved. Shortly thereafter, the area would become a battleground in World War I; the once-mighty Ottoman Empire would be dismembered, and Britain would take control of a vast portion of Mesopotamia. This region, which had never been governed as a single nation, would be named Iraq. It's virtually unavoidable to read this story without peering through the prism of America's current imperialist endeavor. But Unsworth's finely drawn characters and intricately woven relationships provide a flesh-and-blood grounding to the larger political events beginning to unfold. We already know what lies in store nearly a century later.

Letters at 3AM: A Big Picture and a Long Game
A U.S. military powered by biofuels could be a game-changer that ends the oil wars

GOP Oil Spiel Not So Slick
On the Campaign Trail