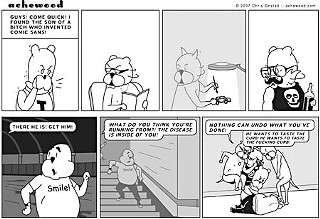 How do you describe Chris Onstad's Web comic, Achewood, to someone who's unfamiliar with it? A modern suburban Winnie-the-Pooh on Stella Artois and acid? A funny-animal version of Our Town as reimagined by Thomas Pynchon? The former is too easy, the latter perhaps overly laudatory. Thomas Pynchon with a lisp, maybe?

"I can't explain the strip to anybody," says Onstad, thoroughly lispless. "Like somebody will say, 'What do you do?' And I say, 'Oh, I write a comic.' And they say, 'What's it about?' And I say: 'No, I can't do that. Just go check it out, and you like it or you don't.' Because it's impossible to explain, you know? It's its own little universe."

It's its own little universe in which self-made millionaire Ray Smuckles and his best friend, the software-programming depressive Roast Beef Kazenzakis, have gotten entangled with, to name a few: a Nigerian e-mail scammer who isn't a scammer at all, various (often fatal) antics involving firearms, the entrepreneurial schemes of their militant-vegan pal Pat, and (the reason for Onstad's current tour) the annual test of red-blooded manliness called the Great Outdoor Fight. Among many other things. Among many other characters, too, some of whom, besides appearing in the semiregular comic, also maintain blogs of their own – blogs at least as funny as the strip itself.

And how funny is the strip itself? See the Pynchon citation above. See also that Time magazine hailed Achewood as the Best Graphic Novel of the Year in 2007. But note, with those referents, that it's not all about the laffs. Read a few months' worth of strips, and you'll see for yourself: It's about the characters.

"What I hear at, like, every signing?" says Onstad. "I get several people who say, 'Oh man, thank you so much for writing Roast Beef – I struggle with depression, and it really helps me, on the days when I'm down, just to recognize that there's somebody else out there like me.' And I totally appreciate that. And then they always go, 'Yeah, and my friend is totally Ray.' So it's like a duo that exists in nature – like they pair off that way. And it really touches me that people identify so closely with this character that I write – not from any firsthand experience with depression but from knowing people who are like that. And it's amazing, when you think, 'Oh, this is more than just a little 10-second chuckle in people's days, this is more important to them than that.' And people have come to signings, they've driven five or six hours, they've ridden trains, because ... because they want to be a part of it."

And now Dark Horse Comics has released the expanded Great Outdoor Fight story arc as a loaded-with-extras hardcover and is jetting Onstad to various nodes of literate geekiness to promote the volume. This Saturday, for instance, he'll be signing at Austin Books & Comics. Which we figured was sufficient cause for an interview. Austin Chronicle: You seem like a pretty busy man these days.

Chris Onstad: Yeah, shit, I have to post a strip after this, and then I have to go hit golf balls with my dad. I'm a busy man.

AC: And this book tour all over the country – how's that treating you?

CO: That's been fantastic. It's rough on the body, but it's such a thrill to finally get out and meet the actual people after seven years of just basically working in my house, you know? It's invigorating. For seven years, the only feedback I really got was either e-mail or just reading amateur criticism online.

AC: There's a lot of that out there.

CO: Which sucks. But when people meet you in person, they just wanna say thanks, which is a big ego boost after seven years.

AC: And how were you able to persevere during those seven ... lonely ... years?

AC: You ever consider going Monday/Wednesday/Friday, definitely, like XKCD?

CO: If you take "definitely" out of the equation, then maybe. But, no, it'll be what it'll be. I don't wanna make any promises, because, you know, the muse descends when the muse descends. I don't wanna force it; I just want it to be good when it is up. And with RSS, people don't have to go to the site all the time, they can just get an update; they don't have to sit around and refresh anymore.

AC: What sort of work did you do before Achewood?

CO: In college I was the editor of The Stanford Chaparral – it's a hundred-odd years old, and it's one of the few places where you can get training – well, you don't actually get training; you teach yourself – as a humorist or a satirist. And I always wanted to write, but after college, I didn't have the patience to go to L.A. and make photocopies for five years before getting a writing job, so I went into high tech. And then when I got the pinch from that, I'd been doing the comic for about six months, maybe more. And we figured out we could make a little living off it, and I've been able to work on it ever since.

AC: And it's turned out really well for you.

CO: It has. Although, you know, I'm in Silicon Valley, I'm surrounded by lawyers and engineers and executives. And here I am, a cartoonist, trying to fit into the standards of living ...

AC: You're kinda bringing the curve down.

AC: Do you plan on continuing Achewood until the end of your days?

CO: I think what we're seeing right now is a natural evolution to branch out into other projects. I have a screenplay going for The Great Outdoor Fight book. I've got a semiweekly bit that I do on The New Yorker website, and I'm enjoying that a lot. And sometimes I sit down and I'm like, "I've had these characters say almost everything to each other at this point, where do I go next?" And there's so much backstory, 1,500 strips and a thousand blog entries, there's so much continuity to be scared of. I have to do a lot of research before I commit a character to doing something in a strip. Like, say that in January of 2005 I had Ray say that he hates onions. And then I write a strip about how much Ray loves onions: I'm gonna get called out on that; it's gonna seem like a big wash. Seriously, the more you go on doing this, the more chances you have to shoot yourself in the foot by moving forward. So you have to move forward a little more slowly and a little more cautiously. Which is unfortunate, because I never wanted to apply "slow" and "cautious" to the way I do things creatively.

AC: And now here you are, painted into a corner.

CO: I'd like to branch the strip out in other media at this point. I've had some interest from studios, like, "Oh, you should be on MTV; you should be on Adult Swim; you should be on Cartoon Network." And I'm thinking, "Hey, that would be wonderful – where's the check?" So we'll see if we can get anything going with these people. I don't want Achewood just to be a cartoon; that's not where my passion lies. My passion lies in writing. Executing the timing between six and nine blocks every day is tough, and I've done the challenge, and I've met it several times. And so now I wanna try something else out, wake my mind up after seven years.

AC: Do you have story arcs planned ahead for, say, five months, a year?

CO: No, because when I know it in advance, then the excitement wears off by the time I get around to doing it. I never wanted to be predictable, even to me. If I do a strip even more than a day in advance, I'll go back and look at it and start tinkering with it, because I feel differently at the time than I did when I was writing it. That's why it's inconsistently produced and presented to people: because it only goes up when I'm feeling that way. I won't sacrifice the quality of it just for the regularity of posting. And I think that's why most newspaper comics and comics in general are no good – because they're sticking to a schedule, because they think they have to, because that's how newspapers invented the comics, seven days a week, regular, boom-boom-boom, to create habit. And I want to create habit, but I think posting three days a week with a lot of extra material is habit-forming enough at this point.