Something Silver This Way Comes

Tweet
print
write a letter
Silver anniversaries are special, and you want to do it up right. After all, the Austin Jewish Book Fair has come a long way since it was founded 25 years ago, back when there were, says Book Fair Director Lisa Apfelberg, "about 70 Jews in Austin." She laughs. "I exaggerate."

It's true, Texas seems at first an unlikely place for one of the premiere Jewish book fests in the country, but that's exactly what the Austin Jewish Book Fair has become. But don't take our word for it – just take a look at this year's offerings, what Apfelberg calls a "dream lineup," which runs the gamut from the comical (opening night guest Evan Handler, a memoirist and Sex and the City actor) and the epicurean (the British "kosher cooking ambassadors" Tracey Fine and Georgie Tarn) to the political (NBC News' Tel Aviv Bureau Chief Martin Fletcher) and the spiritual (Rabbi Brad Hirschfield's Evening of Hope, commemorating the 70th anniversary of Kristallnacht). All those assignations could be applied to Marion Winik, the much-loved former Austinite whose appearance in town is co-sponsored by the Texas Book Festival. (See "Death Becomes Her: Marion Winik".)

And that's not even the half of it, not with 13 days' worth – well, and 25 years, too –of exploring the Jewish experience, in Austin and in the world. The Austin Jewish Book Fair runs from Oct. 29 to Nov. 10. For more information – including a full lineup, locations, and ticket prices for select events – see www.shalomaustin.org/bookfair. 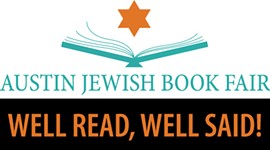