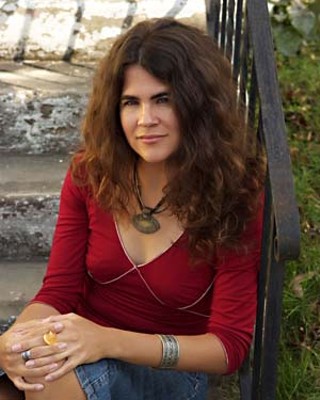 Stephanie Elizondo Griest may have been born and spent most of her life in South Texas, but she is very much at home virtually anywhere in the world, be it at a Rolling Stones gig in post-Soviet Russia or at a bar in Havana after sneaking into Cuba against the wishes of the U.S. State Department (as recounted in her communist travelfesto Around the Bloc: My Life in Moscow, Beijing, and Havana). Calling her a Latina travel writer is like calling Hemingway a great white hunter. Peripatetic-cultural-anthropologist-cum-seriocomic-memoirist is more accurate, but even that mouthful sidesteps the real reason Griest's voice is such a pleasure to read: She's got heart, and she's not afraid to use it.

Her new book, Mexican Enough: My Life Between the Borderlines, takes her to – where else? – Mexico to "learn Spanish and ... gain a deeper understanding of [her] cultural heritage." It opens with a quote from, of all things, the band Popol Vuh (fittingly, in fact – the German band has provided the score for several of Werner Herzog's far-flung cinematic excursions): "They stole our fruit, they cut off our branches, they burned down our trunk, but they could not unearth our roots." The same roots, it turns out, that fuel Griest's instantly engrossing journey of cultural and self-discovery.

Austin Chronicle: When did you decide to become a writer? Were you one of those precocious kids who just knew right off the bat that that was what you wanted to do?

Stephanie Griest: I didn't have access to a large number of books when I was growing up, so I would just read the same book over and over again. Nothing out of the ordinary, just Judy Blume, Beverly Cleary, the kinds of writers we all read as a kid. But my inspiration has always been stories that I get from just talking to people on the street. When I was a little girl, I started a neighborhood gazette so I could interview the neighbors and stuff like that. I've always been moved and engaged by other people's stories.

AC: It's obvious from your writing that you're able to connect with people and draw their stories out in a way few writers or journalists can. You seem pretty fearless in that regard.

SG: You know, I think it helps that I don't look like a typical journalist, whatever a journalist is supposed to look like. I'm usually just wearing ripped jeans and a T-shirt. People that I'm interacting with in other countries kind of have a preordained idea of what a journalist looks like, and when I show up without, you know, a briefcase and I look a lot younger than I actually am, that makes it easier for people to open up and tell me their stories.

AC: Between Around the Bloc and Mexican Enough, you end up speaking four or five different languages. From a journalistic perspective, how do you take notes? Do you use a recorder?

SG: I have a very, very efficient note-taking system. I use all the languages I've ever studied – a combination of Chinese characters, Russian, Spanish, and English – and so basically, whatever is the quickest word to use, I'll use. And I write incredibly quickly. I'm kind of a neurotic note-taker, and so I don't have to look down at the pad. Which helps people to forget that I'm basically writing down everything they say.