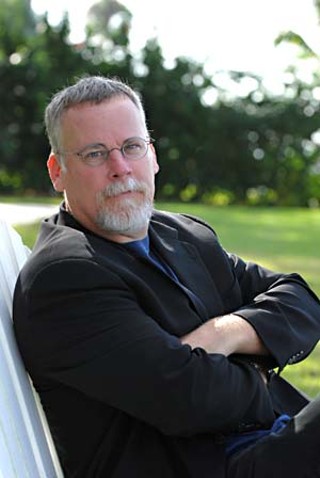 Michael Connelly was still working the crime beat for the Los Angeles Times when he began writing his series of crime novels, set in contemporary L.A. and starring a LAPD homicide detective named Harry Bosch. The Black Echo, released in 1992, won the Edgar Award and sent notice that the bar had been raised on the venerable genre of L.A.-based police procedurals. Leaving such great fodder as the Rodney King riots and other sensational grist behind, Connelly was soon able to quit his day job. Ironically, the relationships with lawmen that he forged as a reporter only became stronger. After publishing 18 crime novels, he's not only a regular with mainstream readers but with LAPD personnel, members of the most famous and infamous police department in the world.

His new novel, The Brass Verdict, will be published Oct. 14. Full disclosure: I have known Michael since 1991, he has blurbed some of my books, and I consider him a friend. But the Chronicle doesn't pay its writers enough for me to write about his work if I didn't think it was exceptional.

Austin Chronicle: The Brass Verdict has two of your protagonists, Bosch and Mickey Haller, the defense attorney and narrator of The Lincoln Lawyer (2005), meeting and interacting. What inspired that approach?

Michael Connelly: It is Haller's book, and Bosch is more of a supporting character. But where they are both on the page together is where the book was most fun and fulfilling to write. Anytime [Bosch] is on the page, we see him through Mickey's eyes. So that was a new take on him, and anytime after 13 books about the guy that I can get in a new take, then I want to do that. Because it keeps me interested, and it keeps him alive.

AC: It was interesting to see Bosch from Haller's point of view. He comes off like a jerk sometimes.

MC: Yeah, you're right. I made him a jerk like that on purpose, and that to me was the refreshing part of the book. In all of the Bosch books, we ride inside with him. We know what he is thinking and what hurts him and heals him; all the while he has this tough exterior. But what if you didn't know what he was thinking? You'd only be left with that hard edge. Harry is a man on a mission, and that is to root out this sort of evil. To do it, he has endeavored to make himself bulletproof so no one and nothing can get to him. That has left him with this hard exterior, and I think that is on full display in this book without any of the mitigating interior thought you get with the other books.

AC: Another strong vibe is the powerful mutual dislike of defense attorneys and cops.

MC: Yeah, I hope it comes through because it is truly there. There are always exceptions, but in general, defense attorneys and cops are not throwing their arms around one another at the end of the day. [Cops and defense attorneys] are sort of natural-born enemies. To get this sense into the book, I have spent a lot of time with both defense attorneys and cops. And sometimes I have arranged to be with both sides at once, and those are usually fairly tense times. A lot of sniping back and forth, a lot of negative stories about the other side. Usually these sessions are very fruitful for me.

AC: As Haller says in the intro, everybody lies. Call me naive, but being a criminal lawyer seems like a pretty rotten job.

MC: Without defenders of the accused, what kind of society do we have? Would we want a society where the accused simply disappear into jails and prisons? I don't think so. We need these people, and so I believe there is a rightful honor bestowed on the profession.

I don't think the lawyers who help me operate under any illusions. They know that 99 percent of the time, their clients are guilty of something. ... I don't know a single defense attorney – and I know a lot of them – who has trouble sleeping at night or feels they have sold their soul, and that's the way it should be. Now that is the reality, and I write fiction. So in The Brass Verdict, we have Mickey Haller going through a crisis of conscience. Physical and emotional trauma in his life has brought him to the point of questioning what he does and whether he can still do it.

AC: I've always admired your use of big metaphors. Here, the biggest one is the flip side of the coin thing with Haller and Bosch; they even live on opposite sides of the Hollywood Hills, with opposing views of Los Angeles, which is great.

MC: I knew back when I wrote The Lincoln Lawyer that it would be likely that I would bring Haller and Bosch together down the road. I actually placed Haller in a house I used to live in on Fareholm Drive. My thinking was that they would have two views of the same place, because they have different views and experiences of the same justice system. Maybe that wasn't so subtle of a metaphor, but it made the process of writing the book a little more clear. So it works for me, and maybe it will for the reader.

AC: One of my other favorites is in the novel Angels Flight.

MC: To me, Angels Flight is a detective story, but it's really a story about Bosch coming to grips with his marriage not working and coming to an end. The little incline railroad called Angels Flight, which goes up the side of Bunker Hill in downtown L.A., is two counterbalanced train cars that pass each other while one goes up and one goes down. I thought that was very symbolic of two people coming to the end of a relationship. They pass by each other.

AC: What music have you been listening to lately?

MC: One is the jazz bassist Ron Carter's latest Japanese import. The other thing is the latest CD from Ry Cooder called I, Flathead. At the time his Chávez Ravine CD was released, I was writing a book called Echo Park, and it had storylines that crossed over Chavez Ravine – both the real place and the Cooder recording. So I had Harry Bosch listening to the CD, and I wanted to quote lyrics from it in my book.

AC: Tell me about your favorites, Frank Morgan and Ron Carter. I was just thinking about Ron Carter when you mentioned him in the book.

MC: I also take inspiration from the stories behind the music. Frank Morgan had to struggle to make his sound. He fought addiction and spent years and years in prison. But somehow he survived to make a difference. One of the most fulfilling things I ever did was take part in a joint lecture with him at the Berklee College of Music in Boston. He played his saxophone, and we spoke to students about the creative correlation between music and writing. It was immensely satisfying and wonderful to spend a couple of days with him. He was a good storyteller. Unfortunately, he passed away in December. The Brass Verdict is dedicated to him.

AC: What's your next book?

MC: I pulled the reporter Jack McEvoy, from The Poet, off the shelf and am currently writing a book about him and his last days as a journalist. He gets downsized by the L.A. Times, and it's about the last story he writes. The working title is The Scarecrow.

AC: The Brass Verdict really zips along. Did you ratchet up the speed because that's what people expect in a legal thriller?

MC: I wasn't conscious about any particular legal-thriller style, but I am always conscious of velocity. Momentum – gotta have it. I really wanted it to build momentum outside of the courtroom, [so] I tried to place as little of the stories as possible in actual courtroom settings. I thought it was safer that way since I was not a lawyer and these books would undoubtedly be compared to all the legal thrillers written by lawyers who have actually done the real work.

AC: Will Bosch ever have to come to Austin to solve a murder? If so, he would surely have to go to a club and see a band or two. Who would he go see?

MC: I think the only thing that could draw Bosch to Austin would be a reunion of the Skunks.

Jesse Sublett is an Austin-based author, freelance writer, and, coincidentally, bassist and singer for the Skunks.