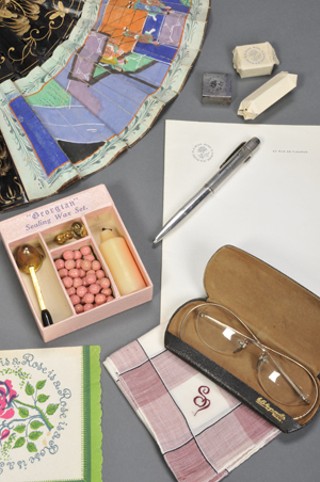 The personal effects of Gertrude Stein, from the Carlton Lake collection (courtesy of HRC) (Photo by Pete Smith)

It's brilliantly meta: The Harry Ransom Center, one of the world's great cultural archives, has created an exhibition about ... archives.

It's called "The Mystique of the Archive," and maybe a question mark just popped out over your head – mystique? Of the archives? Oh yes, my friend. Tom Stoppard, A.S. Byatt, and Julian Barnes, among many others, have created popular works based on that obsession-provoking mystique (Arcadia: A Play, Possession: A Romance, and Flaubert's Parrot, respectively). "Archives promise mystery, adventure, and discovery" for those who explore them, according to the HRC's press materials, and that's not overheated; it's exactly right.

So besides dusty, scribbled-on typescripts, moldy journals, and torn photos, what exactly is an archive? The exhibit quotes Irish playwright and novelist Sebastian Barry on his own archives: "It's a memory trail, like those old Victorian photos – is that a ghost? But here, it's a ghost of your work, a ghost of yourself. ... It's a haunted river, a long river." Almost as poetically, the exhibition calls an archive "the map that traces the trajectory of the imagination." Piecing together and following that map, meeting the ghosts on that river – that's the adventure for people like Stoppard and Byatt. Archives appeal to what the exhibit calls "the sustained magnetism of the authentic," the way certain objects become packed full of something like magic – a magic invested partly by their makers, partly by the attention and longing of millions of people over many years.

"The Mystique of the Archive" demonstrates how archives map the evolution of an idea "into a fully-developed work." (There's a pleasingly meta-meta display on Flaubert's Parrot, featuring the archives related to this book about archiving.) The exhibit also looks at how an archive represents the value of a work. That value may be cultural, but it's also cash-based – writers and their estates are not giving this stuff away. The HRC was never afraid to spend, and back in the Harry Ransom days, it attracted a reputation in England as a bit of a robber baron. To its credit, the exhibition addresses this issue, and co-curator Megan Barnard even pointed me to a recent Guardian article quoting HRC-collected British novelist Jim Crace on visiting the archive – "I held Blake paintings and Coleridge notebooks in my hand. I couldn't help thinking that they didn't belong there" – as well as an anonymous, gloomy British archivist: "Two things are inevitable: death and Texas." But Barnard points out that it is "differences in philanthropy and tax incentives in the two societies" that have put British institutions at a collecting disadvantage, adding that the HRC "has very collegial relationships with its peers in England, and I think most people are glad that these collections are being preserved, regardless of where they are housed." (Also, the British are hardly in a position to complain about other people nicking cultural artifacts.)

The exhibition notes that new technology such as word processing "increasingly challenges the traditional concept of archives." When writers work in Microsoft Word, archivists lose what the exhibition calls "false starts, the drafts that illustrate innumerable changes, cross-outs, and marginal notes [that] tell the story of how a work of literature was composed, how it came to be." Co-curator Cathy Henderson says that new technologies will not change the archive's essential mission, "because we will always collect, preserve, and make available the contemporary cultural record for the benefit of posterity." She adds, "Quite honestly, there is still a substantial amount recorded on paper that makes its way into the center."

At the end of the exhibit, you're asked to consider "what is in your own archive and how you will preserve it." Maybe you will give your Facebook page a little more respect now – and your LiveJournal and Flickr pages, come to think of it. When so much of what was once private archiving is now kept publicly online, what will become of archives? Henderson says that formal archives offer "focused and contextualized collecting that the unmediated 'archive' of weblogs and social networking sites does not enjoy." And Barnard observes, "Although more and more people are 'archiving' much about their lives on weblogs and social networking sites, most writers and artists are not using online venues to archive their creative work ... at least not yet."

"The Mystique of the Archive" exhibit runs Sept. 2-Jan. 4 at the Harry Ransom Center (21st & Guadalupe). See www.hrc.utexas.edu for more.