While insipid wish-fulfillment fiction like Stephenie Meyer's Twilight series gives contemporary fantasy a bad name, Austin author Doug Dorst injects a hefty dose of reality back into magic realism with his debut novel, Alive in Necropolis. Now teaching creative writing at St. Edward's University, Dorst set his book back in his old stomping ground of San Francisco – or rather nearby Colma, the suburb of the dead, where 73% of the residents have been buried in the cemeteries that cover it. Rookie cop Mike Mercer finds himself drifting between worlds. There are the disreputable officers that make up his squad, the college friends that have started to leave him behind, and, much to his surprise, the dead. The spirits of Colma have their own law-enforcement problems, and they're looking for the newest cop on the beat to solve them. Supernatural encounters are written up as incident reports that Mercer never dares file; after all, try explaining to the district attorney the arrest of one of Ma Barker's sons for assault on a railroad engineer who has been dead for decades. But this isn't a horror romp. Dorst combines literary playfulness with the kind of gritty police procedural trademarked by Joseph Wambaugh. There's the smell of the squad room on each page, as Dorst expands out from Mercer to the rest of his unit, and then to the widows, lovers, and unsolved crimes they leave in their wake. When he's not chasing ghosts, and taking their witness statements, Mercer is embroiled in a grueling series of "real life" crimes with victims and suspects who seem hellbent on throwing their lives away. The ghosts are almost a welcome escape for him, except the only reason he can see them is through a series of accidents that are pushing him through death's door. Dorst concentrates on the grit, the failed marriages, the bruises, the hangovers, and moments of despair of life in blue uniform, then lets the curious obsessions and quirks of the spirits that refuse to move on bring some lightness to the story.

Doug Dorst will appear at BookPeople on July 16 at 7pm. 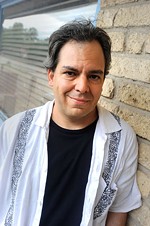