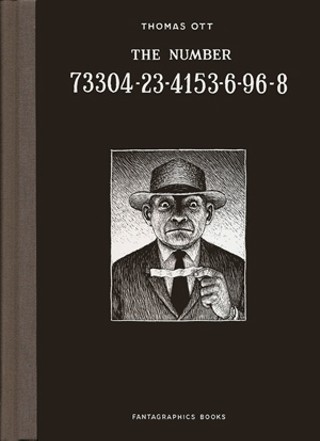 
In the 1920s and 1930s, artists such as Frans Masereel (The Idea) and Lynd Ward (Gods' Man) used woodcuts to produce popular wordless novels which would go on to influence generations of illustrators. The Swiss artist Thomas Ott employs a similar style in his first novel-length work, The Number 73304-23-4153-6-96-8.

The creator of numerous short graphical stories, collected in Cinema Panopticum, Greetings From Hellville, and Dead End, Ott relates here a powerful, Twilight Zone-styled tale of a series of numbers that grants desires to those who decipher the pattern. Following an execution, a prison guard finds a piece of paper with a sequence of numbers (the title's 73304-23-4153-6-96-8) left behind by the dead prisoner. The guard begins to see the numbers cropping up in his life (a clock, a phone number, cards, and even a dog's markings). As he follows the seemingly random numbers, the guard's luck begins to change. Previously a poor, lonely man, he soon comes into money, romance, and happiness, perhaps for the first time. Alas, all this fortune does not last, as the story veers off into surprisingly fantastical and creepy territory.

Ott employs a scratchboard process, a technique that uses sharp knives for etching into a thin layer of white china clay coated with black india ink (as opposed to the more labor-intensive woodcut method, where images are actually carved into a block of wood). His art has a warmth and depth of detail that forebears Masereel and Ward sometimes lacked. Without words, Ott artistically and expertly conveys feelings and clearly distinguishes every action. Text would only cloud the narrative.

From artistic, design, and narrative standpoints, Ott creates a masterpiece of contemporary graphic storytelling that knows no geographical or linguistic boundaries. Ushering in a major new talent, The Number 73304-23-4153-6-96-8 aptly demonstrates the power of Ott's creative vision, while leaving the reader hungry for more from this unique cartoonist. 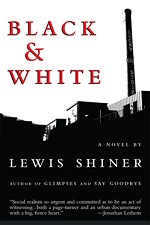