"We made a lot of mistakes," grins Morgan Coy. "But now, look, we have a calendar," he adds, pointing to a dry-erase board on the wall of their tiny Eastside office, a board filled with deadlines and blocked-out days. Last fall, the fledgling Monofonus Press won Most Multiple Multimedia Idea in the Chronicle's annual "Best of Austin" issue but had yet to release the second in their multiple multimedia series. On this humid May morning, Coy and his similarly bespectacled associates Becca Cohen and Will Slack feel a bit more optimistic holding the physical evidence of their trial and error: former Austinite Rebecca Bengal's short story "Captioning for the Blind," with illustrations by Virginia Yount and a five-song EP by doom-metal band the Roller. The idea of the series, essentially, is to shack up local artists, authors, and bands and package their works in an aesthetically pleasing bite-size format. Coy tried it out for the series' first release, pairing his own plague tale, "Days uv Bloat," with illustrations by Colleen Matzke and a CD by the country-folk collective Over the Hill.

"One way I tend to relate to people is [by] working on projects," Coy explains. "And all the people I knew had an array of skills, all very artistic types. I'm a writer and musician myself, so it was like, 'Why do I have to separate these things?' I knew there was a way to capture that all in this cool little community. What a crazy scene there is down here, if you go looking for it."

The idea for Monofonus came to Coy after he worked for local literary magazine American Short Fiction last year and was inspired by reading both the good and bad stuff. He relates that artists and authors tend to fall into Monofonus' orbit more often than they have to seek them out. It's like three degrees of separation rather than six and an interesting experiment in artistic matchmaking that has a distinctly Austin feel.

"The collaborations are very loose," Coy says. "We're packaging it together, but you're not tied to both. I just really like the idea of showcasing three pieces, instead of a hodgepodge. We do try to make good combinations. If we get something that's good and it doesn't fit with what we're releasing, we'll hold on to it."

That desire for synchronicity is apparent in "Captioning for the Blind." The anxiety of Bengal's tale of disappearing animals in the Hill Country is heightened by Yount's eerie, static paintings of landscapes and the Roller's neon gloom glow. It's a perfect partnering and one that benefited from collaboration: The Roller was inspired by Bengal's story to write the song "Zugunruhe," about strange behavior in migrating birds.

Monofonus also acts as label, having just released the Golden Boys' latest EP, I Smell Gold, and releases from locals the Diagonals and Pillow Queens are lined up for summer. There's also an attendant podcast of local live recordings by the Golden Boys' John Wesley Coleman on the site (www.monofonuspress.com).

While Coy and friends are still working out the kinks of running a small press in 2008, a handful of authors and artists is already in the hopper for upcoming releases, and they're hooking up with a video artist to solidify their multiple-multimedia vision. All this based on a made-up word, which seems to be quite inspirational to the group today. So, what exactly is a monofonus?

"It's a spiritual, philosophical thing," Coy says. "It can be used to describe anything. Life is a monofonus."

"Oh, we should use that as the tagline on the books," Cohen adds. 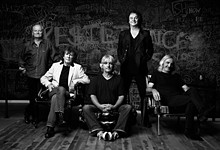