Half a World Away, and at War

One reporter's journey from Odessa, Texas, to Kinshasa, Congo

The Odessa-born journalist Bryan Mealer knew he didn't want a desk job, but he never imagined he would stumble into covering the shockingly underreported war in Congo – the death toll of which would eventually outpace that of any other conflict since World War II. In his new book, All Things Must Fight to Live: Stories of War and Deliverance in Congo, the University of Texas graduate and former Chronicle contributor lays out in clean, concise language a conflict largely misunderstood, even forgotten, by most. This isn't distanced reportage but rather an immediate, personal, and harrowing account of one journalist's trial by fire. Via e-mail and just hours before he headed to San Antonio for the Texas leg of his book tour, Mealer told me a little bit about how he landed in Congo and what kind of psychological toll it took on him.

Austin Chronicle: You describe the decision to move to Africa with your future wife almost as a lark (albeit a very romantic one). Why Africa, specifically?

Bryan Mealer: I was working at Esquire magazine when the World Trade Center collapsed and rushed down there to write stories. After we went to war in Afghanistan, I worked closely with all the great war reporters on the magazine's roster – guys like Scott Anderson, C.J. Chivers (a former Marine captain and reporter for The New York Times), and John Sack, who'd covered every war for Esquire since Vietnam. But at the end of each day, I was still sitting at a desk in Midtown Manhattan, while these guys were out reporting on the world changing around us. I wanted to be part of that, be part of something. I thought about just showing up in Afghanistan, Gaza, or Israel but had no money or contacts, not even a flak vest. Plus I was just nervous about making that kind of leap. I started dating Ann Marie, who was already planning to go kick around in West Africa, riding buses, hiking, writing. One night in a bar, we decided to just go together. We'd been dating three weeks. Well, the war broke out in Abidjan, Ivory Coast (where we'd planned on basing ourselves), in 2002 and scrapped those plans, so we decided on Nairobi instead.

To me, Africa was the perfect place I'd been looking for. There weren't a lot of reporters and so many underreported stories. I'd decided I would write about AIDS and travel to exotic locals such as Eritrea, Ethiopia, and Zanzibar and write travel stories, just like Bruce Chatwin or someone. But two months into Nairobi, I ended up going to Congo, which was never, never on my radar. Congo was dense jungle, lost-looking rivers that snaked into nowhere. Guys like me disappeared in places like that.

AC: Did you know early that you wanted to be a journalist – and not the desk kind? And when you kept returning to Congo, after witnessing terrible atrocities and experiencing close calls with death, how did you rationalize it to your family (and even to yourself)? Do you feel a moral responsibility to report? Is there a danger-seeking compulsion there at all?

BM: I've always wanted to be a writer, and journalism just allowed me to do it and be paid. And I started enjoying getting out and talking to people and soon realized that real life was much more exotic and captivating than anything I could make up on my own, and the greater challenge was getting out and finding those stories. Back at my desk at Esquire, I'd been looking for something, looking to be part of something greater than myself, looking for something to sink myself into and work my way out. That's what makes a good writer, I thought, total surrender. And I ended up, almost by accident, going to Congo to cover a massacre where as many as 1,000 people had been butchered in under three hours. After trekking to this village and meeting the survivors – some missing their arms, legs, barely hanging to life – and realizing I'd stepped into this lost and forgotten war where millions had already died, I knew that Congo was what I'd been looking for. I gave myself over, and I'm just now climbing back. 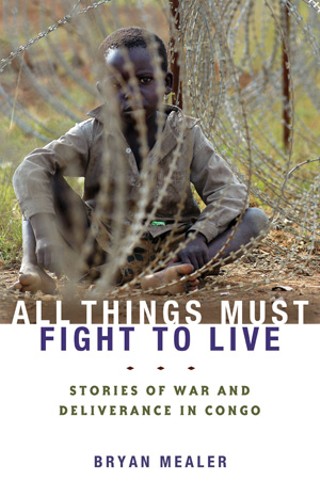 I don't consider myself a danger junkie, and I tried to avoid danger whenever possible. Sometimes you accidently find yourself caught in the middle of violence and must work your way out. This happened to me several times. I justified this, and the horrible things I ended up seeing and writing about, because I was telling a story that few people were telling. And as I said, I'd given myself over to it, and it was all I ever thought about.

I was fortunate that Ann Marie understood and encouraged me through every step of the journey. There were spans of eight, 10 months when we didn't see one another. Yet we managed to stay together and are now married. As far as my family in Texas, I told them as few details as possible, just so they wouldn't worry. But they end up reading the stories anyway.

AC: It's obviously an incredibly emotional read – on page 2, you're describing horrific tribal warfare. What was the process of writing the book like – did you dive in as soon as you came home for good, or did you let it sit with you for a while?

BM: After covering the massacre at Drodro, I'd narrowly escaped another siege in the town of Bunia, where I'd based myself to do my reporting. I'd returned the following week to find the town laid to waste, bodies everywhere in the roads, the population living in a squalid camp.

I originally wrote this story as a magazine piece for Esquire (which Harper's eventually published). After it was all done, I'd come home to this empty house in Nairobi and tried to sort out all the tangled webs of tribal affiliations, militia leaders, and the war in general, and it ended up reading like some academic paper. My editor at Esquire really encouraged me to get closer to the story, to write it as if it had taken place in Cleveland, not Africa, because people tend to automatically glaze over when it comes to that place. So I did that and ended up putting myself into the story because it was the best way I could tell it. I'd also taken all these photos of dead people on the streets of Bunia and plastered them on my walls as some kind of vigil or freak totem, then wrote that story about 12 different times. In the end, all the violence and emotion was there, just as I'd experienced it, and I think it allowed for people to gather a greater understanding of the situation in general. Instead of telling them a story, I tried putting them on the red-dirt roads themselves.

AC: What's next? Do you want to keep doing field reportage?

BM: You know, after covering that massacre and the fall of Bunia, I returned to Kinshasa the following year as the AP correspondent, covering much the same material. I did that for a while, then decided to distance myself from war and suffering and go in search of something else, some kind of revival. The war had mostly ended in Congo (which is three times the size of Texas), yet I'd mainly focused myself in those places where violence was still taking place. So a few months later, I set off on a barge up the Congo River, just like Joseph Conrad in Heart of Darkness, a journey that took one month, then rode a bicycle eight days through the jungle. The whole trip nearly broke me in half, and I wound up finding only the same degree of suffering in the jungles as I did in the war zones, except these people had simply been forgotten. I later took another journey cross-country on Congo's old Belgian-built railways. That trip was much better, and I finally found what I was searching for, a bit of hope. And that's how my book ends.

I'm now writing another book with a 20-year-old Malawian kid who builds windmills out of old tractor parts and blue-gum trees and powers his village. It's inspirational and hopeful, and exactly the remedy I needed after Congo.

Bryan Mealer, All Things Must Fight to Live: Stories of War and Deliverance in Congo