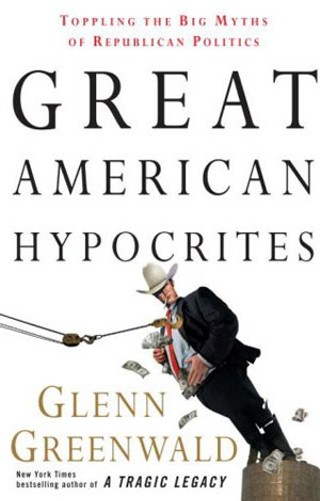 
Right Is Wrong: How the Lunatic Fringe Hijacked America, Shredded the Constitution, and Made Us All Less Safe


It's a Jungle Out There: The Feminist Survival Guide to Politically Inhospitable Environments

As the blogosphere comes into prominence this election year, several of its leading voices transition into print. But the fevered pounding of keys aside, is the act of writing books and blogs more similar than dissimilar?

An attorney versed in constitutional law, Salon blogger Glenn Greenwald approaches the abuses of the Bush regime with rigorous, unrelenting urgency. His third book, Great American Hypocrites, follows a simple idea, exemplified in the empty flight-suit theatrics of our Vietnam-avoiding president or the values-sermonizing of bathroom-trolling Sen. Larry Craig: "[T]hose who playact as powerful Tough Guys and anti-Terrorist Warriors and Crusaders for the Values Voters have lives filled with weakness, fear, unbridled hedonism, unearned privilege, sheltered insulation, and none of the 'Traditional Masculine Virtues' they endlessly tout." He devotes his opening chapter to deconstructing John Wayne, to whom Greenwald personifies the modern right, albeit not in a fashion they'd prefer: war avoidance, broken marriages, and pill-popping. With Greenwald constantly restating that Wayne "is the perfect symbol for the political right-wing movement" because "his actual life was in every respect the precise opposite of what he claimed to be" ad nauseam, it's highly repetitive – a trait that plagues the book. The rigor making Greenwald unparalleled online leaves him laborious in print. Subsequent chapters are more rewarding, with Greenwald exposing Republican hypocrisy in war-making, morals, and spending. His final chapter attacks John McCain and the sycophantic media spinning his hypocritical "maverick" image. But Greenwald reserves his most damning attacks for the media, honing in on recurrent, perverse, sexual frames – how every Republican politico's "a tough, swaggering warrior by day, a wholesome family man by night," while "Democratic and liberal males are demonized as effeminate, effete elitists, and liberal women as emasculating dykes." Moreover, it's the mainstream media – talking heads like Chris Matthews – who run with the right's "freak show," ensuring a steady diet of John Edwards' haircuts and Barack Obama's bowling scores. "It is an endless loop of self-referential narcissism – whatever they endlessly sputter is what 'the people' care about, and therefore they must keep harping on it, because their chatter is proof of its importance." Or as he surmises, it's "tantamount to someone who keeps chewing their food and spitting it across the room and then marveling at how filthy things are and writing columns bewilderingly examining how and why the floor is covered with food and what that signifies." 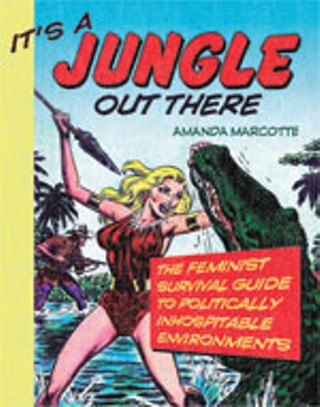 Mining similar territory is blogging impresario Arianna Huffington's Right Is Wrong. While lacking the single-minded determination of Greenwald's tome, it substantively but snarkily addresses the failings of the media and modern movement conservatism. With its chapters subdivided by headings and crammed with sidebar detours, it's practically a print version of the headline-filled, blink-and-you-miss-it HuffingtonPost.com. Huffington summons an outraged but bemused voice throughout: She describes NBC toady Tim Russert's fearmongering interview of Homeland Security Secretary Michael Chertoff as "about as priapic a display as you're ever likely to see outside of a porno film or the monkey cage at the zoo." Still, Huffington makes sound arguments regarding Republican rule – on the war in Iraq, torture, immigration, and more, "[I]t has become impossible to tell where this [party's] core stops and the fanatical fringe begins." From civil liberties to the science on global warming, for Huffington, it's not right or left, but right and wrong.

Pushing the snark further still is It's a Jungle Out There, from Pandagon blogger (and Austinite) Amanda Marcotte. Catapulted into the national spotlight when tapped to run John Edwards' campaign blog, only to be attacked for her religious views and unapologetic potty mouth, she lays out a "feminist survival guide" for crises small ("What to Do When Girls Gone Wild Comes Knocking," "Murphy Brown May Have Been Cancelled, but Her Demonic Presence Lingers"), large ("Abortion Is an Industry: Antichoice Myths," "When Sexism Isn't Sexism: The Pay Gap"), and icky ("Asshole Bleaching: The New Frontier"). Ribald, bullshit-free, and empowering, it's perfect for feminists in training – and a great example of transitioning a blog's discrete observations, irritants, and outbursts into a satisfying whole.