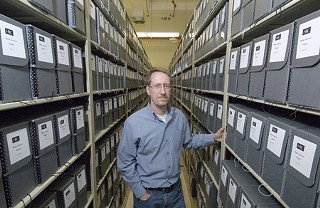 There won't be a ceremony, no hullaballoo or doors dramatically thrown open, but on Jan. 3, Norman Mailer will be open for business. He left the mortal coil earlier this year, but in his stead, he left a voluminous archive that the Harry Ransom Center acquired in 2005 for $2.5 million (a portion of which Mailer regifted to the University of Texas for promotions and last year's symposium, which he attended). Two years later, lead archivist Steve Mielke and his staff have finally wrapped up the exhaustive filing process; Mailer's archives will now be accessible to scholars and the general public alike – all it takes is a picture ID (and, presumably, your best behavior).

It's the HRC's largest individual literary collection and certainly Mielke's longest, most involved project. He benefited, for a time, from Mailer's own involvement in the process. Up until his death, Mailer helped in identifying and explicating some of the 40,000 pieces of correspondence, although, Mielke notes, considering some of the materials were more than 50 years old, "he couldn't always remember."

It was fascinating and far-ranging work, says Mielke, owing to Mailer's role not just as celebrated author but also filmmaker, activist, politician, professor, and outsized personality. When I visited the archives last week, Mielke pulled out one artifact after another, including original printing plates from a canceled run of Mailer's third novel, The Deer Park. A pocket address book from his time in Hollywood boasted scribbled names like Shelly Winters to Monty Clift, and his Rolodex from the Seventies read like a Who's Who of the times – from Truman Capote and Charles Mingus to Hugh Hefner, The Mike Douglas Show, and the famed Manhattan restaurant Elaine's.

The collection, which currently only extends to 2005 (the last two years of Mailer's life are still being processed), is housed in more than 1,000 boxes. For a little perspective, imagine stacking them one on top of the other – they'd extend as tall as the UT Tower. Those interested in perusing the archive are recommended to first check out the HRC's online finding aid for a detailed inventory of the Mailer archives (www.hrc.utexas.edu/mailer).

Letters @ 3AM
Memories of Norman Mailer