The Capitol Beat on Books

Politics as usual at the Texas Book Festival 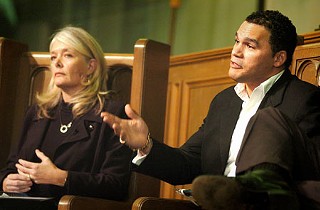 Medic Paul Rodriguez, who suffered from post-traumatic stress disorder upon returning from Iraq, spoke candidly about what it took to get the job done – the shutting off of certain parts of his brain only to belatedly process, "Wow, this guy is missing his head." (Photo by John Anderson)
Last weekend's Texas Book Festival didn't have the political superstars of years past – no Obama or Bill on the lineup – but politics suffused the fest nonetheless. You couldn't throw a rock without hitting a Bush (but pity the poor sap who might've tried – the place was swarming with Secret Service). First daughter Jenna was on hand to talk about her young-adult novel, Ana's Story: A Journey of Hope; Mama Bear Laura, of course, founded the festival; and even the most benign panel seemed to dip – perhaps inevitably, considering the location – into discussion (vivisection?) of Pa President. 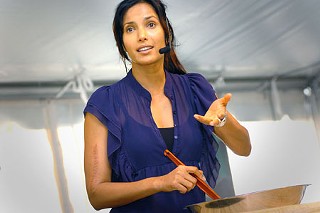 Michael Erard, onetime Austinite in town to discuss his book, Um...: Slips, Stumbles, and Verbal Blunders, and What They Mean, which leans heavily on gaffe-happy George, grinned, "It's a thrill to be talking about George Bush in the Texas Capitol in a festival founded by Laura Bush. Let's just take a moment to appreciate the irony." (Interesting non-Bush-related fact: A slip of the tongue, meaning a malapropism, a spoonerism, what have you, happens once every 1,000 words, which number-crunches down to 16 to 32 a day.) 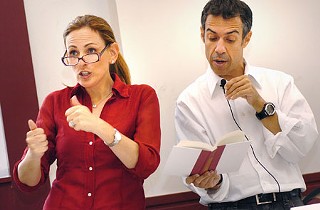 Deaf actress and author Marlee Matlin, reading for the first time from her latest children's book, Leading Ladies, had nothing but nice things to say about Texas and its barbecue, but her session was marred by the lack of a raised platform, necessitating two additional signers on either end of the room. (Photo by John Anderson)

The panel on Trish Wood's book, What Was Asked of Us: An Oral History of the Iraq War by the Soldiers Who Fought It, eventually went down a political path, too, when one questioner tried to spark (uncomfortably) less of a dialogue and more of a moral accusation about the Iraq war, but not before Maj. Chris Toland spoke at length about a devastating roadside bomb that "flipped a 30-ton vehicle upside down and cracked it like an egg," leaving 14 Marines dead as well as an Iraqi civilian translator. He later read aloud in tribute the names of his lost squad, just as he had done over the radio in August 2005 when first reporting the casualties. Wood claimed the genesis of the project was the feeling that, unless you personally know a veteran, "they're invisible mostly to the nation." At least for an hour, in the quiet of the First United Methodist Church's sanctuary, they were anything but. 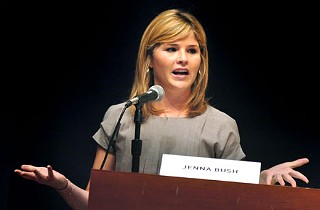 A capacity-crowd came to watch Jenna Bush discuss Ana’s Story: A Journey of Hope, a young-adult novel inspired by her UNICEF work. (Photo by John Anderson)

In a case of bizarro scheduling, the boys from fake-news outfit The Onion were slotted next in the sanctuary. And I do mean boys – were it not for the unruly facial hair, you'd swear head writers Mike DiCenzo and Dan Guterman still belonged in short pants. Overcoming some technical hiccups, they led a PowerPoint presentation on their book, Our Dumb World: Atlas of the Planet Earth, which rendered the country (New Jersey: "Demanding people shove it up their ass since 1892") and the world (Malawi: "Come for the food shortages, stay because you died") in their signature headline style, landing the audience in that not-unpleasant place between a wince and a guffaw. 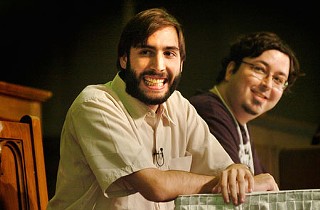 Sunday's big hitter, Watergate journo Carl Bernstein, came to talk about the biography A Woman in Charge: The Life of Hillary Rodham Clinton. The buzzword of the day was "truthfulness" and Clinton's sometimes-rocky relationship to it, but, yet again, the conversation wended its way back to talk of Bush. Responding to a question regarding the electability of Clinton and a woman in general, Bernstein replied, "We certainly couldn't do much worse than we've done." When the applause died down, Bernstein followed up that even Republicans on the Hill now concede, at least privately, that "this has been a catastrophic presidency." Were it not for the tremendous din of cheers and applause that filled the House Chamber, I think we all might have taken a moment to appreciate the irony. 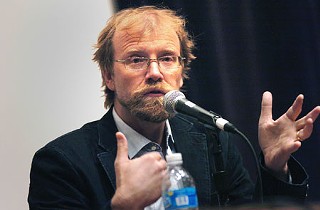 “I had the idea that to be a writer you had to be defective”: In an auditorium packed with (much-deserved) devotees, George Saunders (CivilWarLand in Bad Decline, The Braindead Megaphone) spoke engagingly about “aesthetic agitation,” his creative maturation, and about heading off to Syracuse’s MFA program at 27 with “I think the technical term is a heavy Kerouac boner.” (Photo by John Anderson)

Texas Book Festival, Trish Wood, Laura Bush, Jenna Bush, George W. Bush, Michael Erard, Um...: Slips, Stumbles, and Verbal Blunders, and What They Mean, Ana's Story: A Journey of Hope, What Was Asked of Us: An Oral History of the Iraq War by the Soldiers Who Fought It, Our Dumb World: Atlas of the Planet Earth, Mike DiCenzo, Dan Guterman, Carl Bernstein, A Woman in Charge: The Life of Hillary Rodham Clinton, Marlee Matlin, Padma Lakshmi, George Saunders