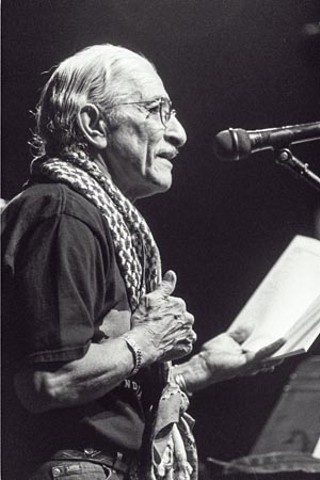 "I don't think I'm anybody, writes Raúl Salinas in raúlrsalinas and the Jail Machine: My Weapon Is My Pen (University of Texas Press, 2006). "On the one hand, you say I'm important because I've done these things. On the other hand, I still consider myself a cucaracho, a homeboy."

Yet, poets, writers, scholars, musicians, students, friends, and familia will come from all corners of the nation to honor the Austin-based poet and activist and help raise funds to continue the work of Red Salmon Arts, the Native American/Chicano/a cultural-arts organization Salinas launched in 1983. Under the Red Salmon Arts banner, Salinas and many dedicated volunteers have overseen Red Salmon Press and the Save Our Youth writing program for high school and incarcerated students. They've also built a local base for grassroots organizations like the Leonard Peltier Defense Committee, the Free Mumia Campaign, the Comité en Solidaridad con Chiapas y Mexico, and others.

Amorindio is a bittersweet gathering. Salinas has been struggling with several debilitating health issues, severely curtailing his public appearances, including running Resistencia Bookstore. As home to Red Salmon Arts, the South Austin-based bookstore specializes in politically progressive works by poets and other writers and hosts regular readings featuring new and established writers. Though the store remains open with business as usual, Salinas' absence is palpable. He may be an Austin homeboy, but his life and work are larger than the modest bookstore reveals.

"Since 1968 Salinas' writing and activism have earned him international recognition as a spokesperson for a diversity of political causes, ranging from prisoner rights and national liberation struggles to gang intervention and youth arts advocacy," writes Louis Mendoza, associate professor and chair of the Department of Chicano Studies at the University of Minnesota in Minneapolis, in his introduction to raúlrsalinas and the Jail Machine. Mendoza edited Jail Machine and has written extensively on Salinas' work and his contribution to U.S. and Chicano letters.

Salinas' work first gained attention while a prisoner in Leavenworth Federal Penitentiary. His 12 years bouncing between some of the harshest prisons in the U.S. were a defining experience for him, but not the only distinguishing factor of his work, Mendoza says.

"He already loved literature, music, and culture before prison. He already had a strong sense of rebellion and sense of social injustice and inequity before going to prison. These came from lived experiences that shaped him into a social, cultural rebel of the working class – not necessarily in a politicized way, but as a product of the emerging counterculture of his time that resisted the drive to conformity."

The outsider poetics of the beat poets, the malleable articulations of jazz and the blues, and a finely tuned ear for the riffs of oral expression heard on the streets of his native East Austin and elsewhere all influence his poetry. His work is said to brim with a "righteous anger" yet is infused with compassion, hope, and affection.

"Raúl is a rare individual, the walking definition of an organic intellectual," says Bryce Milligan of San Antonio-based Wings Press, which published Salinas' most recent book of poems, Indio Trails: A Xicano Odyssey Through Indian Country. "Like his pinto-poet peers, Ricardo Sánchez and Jimmy Santiago Baca, Salinas emerged from the joint as a well-read, highly committed activist poet. ... I've known [him] for 25 years, and I have always been impressed not only by the depth of his spirit but by the fact that he simply makes good things happen, no matter what the personal cost. It has been an honor to call him a friend."

Salinas' signature poem, "Un Trip Through the Mind Jail," is often called the Chicano "Howl." But his work is also playful ("Tee-Hee/Look at me/I can pee from up a tree!" "Emergence of a Poet [self-realization]," 1959), elegiac, revelatory, urgent, demanding, and lyrical. That lyricism is most evident in spoken-word CDs of his work, Los Many Mundos of raúlsalinas (collaboratively produced by Calaca Press and Red Salmon Press, 2000) and Beyond the Beaten Path (Red Salmon Press, 2002). Accompanied by jazz musicians, the CDs draw material from Salinas' three books of poetry, Un Trip Through the Mind Jail y Otras Excursions (Editorial Pocho-Ché, 1980; Arte Público Press, 1999), East of the Freeway: Reflections de Mi Pueblo (Red Salmon Press, 1995), and Indio Trails.